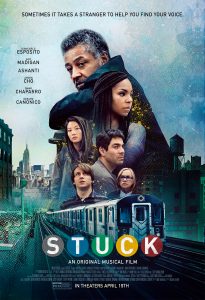 It’s not the breaking into song which seems unbelievable – I’ve seen that several times on the Tube in London (when I say seen, it’s been through half-closed eyelids, pretending to be asleep). But strangers actually talking to each other? I know, what?

Despite covering death, racism, immigration, homelessness, sexism and more, Stuck is remarkably buoyant, and enjoyable (if prone to lecturing and over-simplifying complex issues).

Stuck does try to show that despite the different prejudices of many groups, and different types of privilege – issues which often leave liberals fighting among themselves while the Right sails on regardless – progress can be made.

Using an underground train to bring people together and force them to talk is a good one. Not only are we splitting into even smaller, separate communities above ground, but below the surface it’s almost become a joke how much we avert our eyes to avoid contact with fellow commuters.

Now it’s phone headphones we use to signal our iceberg-like qualities; it used to be Walkmans. It’s always been books and feigned snoozing. So many of us in our own worlds, but not forthright enough to say that we don’t want to speak to someone.

In Stuck they do say that though; everyone is pretty forward. Maybe it’s an American thing, or maybe it’s for the movie. (I’ve been on the New York subway and I don’t remember anyone speaking to me, though I was pretending to be asleep, with headphones in, a book open on my lap and a hotel DO NOT DISTURB sign round my neck.)

Stuck begins with a cacophony of jarring, discordant city sounds, though the noises soon merge into melody. It’s a taste of what is to come, as everyone in the carriage gets to shout their frustrations about society at their fellow passengers, and sing their own song (literally).

On the train in the corner is Lloyd (Giancarlo Esposito). He’s black, and homeless, always with his cart of possessions, sitting alone as everyone gives him a wide berth. The looks he gets for cleaning himself up on the train are probably the same ones he’d get if he was unkempt.

His sonorous and resonant voice is perfect for train carriage Shakespeare speeches, or would be if people wanted to hear them. Eventually Caleb (Gerard Canonico) gives him 20 dollars to shut up. The 20-something Caleb is a talented graphic artist, and his song brings to life his disabled young superhero Maggie, who appears in the carriage.

But with the subway train stuck at a red light because of an emergency, soon fissures and tensions are appearing.

Caleb has followed Alicia (Arden Cho), a Korean dancer, on to the train – after also turning up at the dance studio where she practices, and at her local coffee shop. It’s not a situation the script handles well. He’s basically a stalker, and while she does get to tell him what she thinks of him, the message we’re given is that he’s a misunderstood nice guy and she’ll learn to be more accepting. Women are always told to do that, and despite what we later find out about him, his behaviour is very unnerving – an incident in Alicia’s life that we see in flashback only makes it worse.

Everyone thinks they’re right and everyone is attacking each other, with temporary factions dissolving and reforming in an instant. For a while the carriage is like a pay-it-forward of insults.

Alicia is assumed to be Chinese. She assumes Ramon (Omar Chaparro), an exhausted family man working several jobs to pay for his talented daughter’s dance lessons, is an illegal immigrant and rants at him about how they don’t pay taxes. Lloyd accuses Sue (Amy Madigan), a middle-aged white professor, of seeing him only as a homeless man. Eve (Ashanti), a young black woman, backs up Sue and calls out Alicia for racism. Sue too jumps to conclusions and assumptions. Alicia berates Caleb for his creepiness. Ramon berates Lloyd for not helping himself to improve his life.

Sue is the most obviously privileged but she’s also suffered a huge loss, and she alone has no chance of making her life right. It’s a good example of how privilege and terrible events can co-occur, and she’s not let her off the hook for her own prejudices. Eve, kind but very candid, wants to avoid the life her mother had bringing up two children. Everyone is running to stand still, trying to make their own lives work against a system stacked against them.

At times Stuck is clunky, as individuals take on the mantle of their wider community (or family) and aggressively fight their corner, delivering mini lectures. It’s not supposed to be realistic – the situation is by its nature contrived, sometimes reality and imagination blur, and, well, it’s a musical – but it can come across as stagy and polemical.

And there’s no understanding of how women feel about men invading their personal space when we’re trapped, demanding attention that we don’t owe them. The resolution of a pregnancy storyline also made me uneasy.

Still, in Stuck as in life, music and singing are conduits for oral histories and backstories, and a way to express pain, joy, heartbreak, identity and fun. The singing is exuberant and sometimes captivating, and the different styles of songs really work. Ashanti and Esposito in particular are superb at telling their stories through more than just lines and lyrics.

There are two stand-out musical numbers: Amy Madigan’s Gone, a powerful and heartbreaking duet with Tim Young who plays her son (and also co-wrote many of the songs); and Stuck, an a cappella ensemble performance on the train when the lights go out, illuminated by phone screens, the disparate passengers finally a group who’ve found things in common. The songs include flashbacks across the city, from Ramon’s arguments with his wife over his many jobs to Eve’s unfaithful boyfriend.

Stuck shows that one to one is always better when trying to find the humanity in other people, or ways relate to them. It’s too simplistic a message on which to base solving society’s problems, and it avoids structural inequalities that would hold back everyone in that carriage, but it’s a start.

Something Stuck doesn’t answer though – will we get a soundtrack album for me to listen to on the tube, headphones in, eyes shut, pretending to be asleep?

Watch the trailer for Stuck: