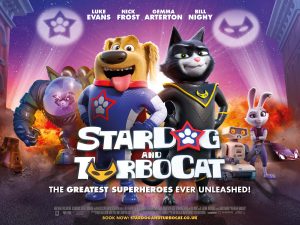 This movie certainly understands cats and dogs, made up as it is of frenetic activity interspersed with longer periods when not much happens.

Then the last 25 minutes really crank up the excitement, like that half hour starting at 6pm when cats go nuts and start running round the living room chasing their tails.

Still, at 90 minutes it never outstays its welcome (unlike the retriever currently hogging my whole sofa and shedding hair around my just-hoovered home).

Stardog (Nick Frost), otherwise known as Buddy, was sent into space by his trainer David in 1969. 50 years later he wakes up in a bin in Glenfield – he’s desperate to find David, who always promised he’d find Buddy and the space capsule after the completion of the mission.

So imagine Forever Young, when pilot Mel Gibson found his wartime sweetheart after he’d been frozen for 50 years, but with animals and aimed at children.

Unfortunately Glenfield’s residents hate all animals, and have done since the arrival of the square-jawed Officer Peck (Cory English) in their town, who has won nearly everyone over to his way of anti-animal thinking. There are signs everywhere about what to do with strays, and when he takes them in they’re never seen again. So effective has Peck’s propaganda been that people run from Buddy in terror or clutch their babies to them.

Any animals that have survived are hiding, including Felix (Luke Evans), Buddy’s first acquaintance. Tech mastermind Felix is a cat who fancies himself a black-caped superhero, completing his look with Sinclair the British robot butler and a black supercar, so let’s call him BatCat. 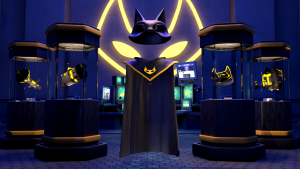 He’s cynical about the chances of humans and animals ever getting along again and has no time for Buddy at first, who is convinced that even Glenfield’s residents can be reminded of their previous love for animals when they see his expressions of joyful gormlessness.

For the first half of the film it all feels very empty. The town is deserted, not just of animals but also of people. Then Buddy is introduced to Cassidy the rabbit (Gemma Arterton), a former magician’s prop. She runs G.U.A.R.D., the Glenfield Underground Animal Rights Division, comprising scientist mouse Tinker (Rachel Louise Miller), Bullion a surprisingly useful goldfish (Ben Bailey Smith), scruffy old stray Todd (Robert G Slade), and Victor the bulldog (Dan Russell).

It’s clear that Cassidy is the competent one, with Felix all cape and no trousers, happy to snooze under a newly-appeared sunbeam even as disaster looms.

Meanwhile Buddy is often waylaid by the prospect of food: “I just realised I haven’t eaten for 50 years!” he exclaims, though my dog does that about five minutes after I’ve given her a Bonio. 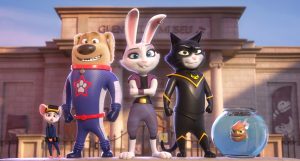 Buddy’s space capsule was running on hyperlithium, a power sauce that looks like a giant pink diamond and has, it turns out, given Buddy some fantastic superpowers (his joy at finding out he can fly is touching. In fact his joy at everything is touching). Cassidy wants to find the hyperlithium and use it to protect the local animals from Peck and the town’s residents; Buddy really just wants to find David. But first, they have to find the capsule and avoid being caught by Peck.

This is a British animation (made with support from Yorkshire Film) with a British cast, though its characters are American and it is set in an American town. I’m not sure they could have set it here, what with every resident of Glenfield loathing animals. There’d have been pickets outside UK cinemas.

While the animation isn’t particularly sophisticated, and there’s little depth to the world we find ourselves in, Stardog & Turbocat is good fun that should go down well with younger children. There’s the usual cartoon slapstick, along with some witty set-ups – I liked the YouTube cat videos that have made Felix rich and famous, but which he despises.

And we get (a rather underused) Bill Nighy as Felix’s rebuilt 1980s-era robot butler Sinclair. Sinclair can talk the talk (he’s perfectly posh) but doesn’t always walk the walk, as he keeps running out of Felix’s milk.

(I hope the name is a reference to Sir Clive, inventor of the ubiquitous Sinclair Spectrum home computers from the ’80s. They had rubber keyboards and had to be connected up to a tape recorder and the family’s spare portable telly. I know, just wait til I tell you about growing up with only three TV channels.) 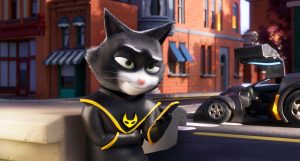 This is a chirpy movie about trusting your friends, and inclusiveness (Glenfield’s residents have been turned from animal lovers to intolerant, ahem, scaredy-cats).

The story is straightforward but not ridiculously simple; there’s some double-crossing thrown into the mix, and it does have a dark undercurrent. Even I wasn’t sure if David was the kind animal lover scientist who had meant what he said about searching for Buddy back in 1969, or if the dog was merely a tool in the space race. (I have a space-mad 10 year old though, who has told me all about the fate of the animals sent up in rockets for the furtherance of science in the ’50s and ’60s, so excuse my cynicism.)

Buddy and Felix make an engaging double act thanks to Frost and Evans’ energetic portrayals, though the other characters are more forgettable.

Still, while Stardog & Turbocat doesn’t have the ironic wit of some other children’s animations, this is perfectly enjoyable for parents and younger children if you’re after a cinematic refuge from Christmas chaos in the next few weeks.

Stardog & Turbocat is out in UK cinemas from 6 December.

Site info here.
Or email me on sarah[email protected]