You are here: Home / Film Reviews / Song Of Granite 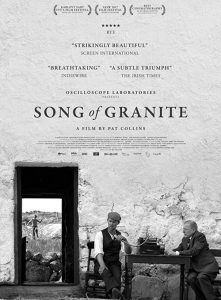 Ireland’s tradition of oral storytelling is well known, and the film starts with an elderly man regaling people of all ages with the tale of Sweeney and St. Rónán, as they sit round a fire. It’s a warm, cosy and in many ways melodic start to this part-drama, part-documentary film from director Pat Collins (Silence).

Though while it draws you in with its lyricism and beauty, ultimately I came away feeling I never really got to know its subject.

As the title suggests there’s always a stony distance between the shy Joe Heaney and the rest of the world, a gap bridged by his extraordinarily bold and uncompromising traditional Irish singing, or sean nós.

Filmed entirely in black and white, apart from a small amount of archive footage the style is actually very modern, even in scenes set in the 1920s or 30s. Heaney was born in 1919 and we start off in his childhood, but it could be yesterday, were it not for the long skirts and shawls on the women, and the too-short raggedy-legged trousers and darned jumper the young boy always wears.

It mostly follows a traditional linear narrative, particularly in the first half; though it comes pleasingly full circle in some ways. Yes there’s a meeting between old and young Joe, but that is its only conceit; and as I head through my 40s and realise how much I’d like to say to my younger self (including, sadly, “Sarah please don’t sing”) it’s not something that seems out of place.

Galway, where Joe grew up, is a Gaelic-speaking area (he was born in the village of Carna); though he and his classmates study English at school, where all the Catholic teaching is in English and they learn by rote how they can have no secrets from God. (Most of the dialogue is in Gaelic and is subtitled, though the songs are not subtitled, which is a shame.)

Joe as a boy (Colm Seoighe) is a sweetheart, putting his heart and soul into everything from singing to cutting peat to sowing potatoes. At school he’s asked to sing a song he’s learnt at home; it’s a beautiful impromptu performance, though he has a tendency, presumably because of his shyness, to let his chin sink down into his chest. “Imagine you had to get a hen’s egg into your mouth!” says the teacher, otherwise delighted with him.

Joe’s father is an amazing singer, and one of the delights of this film is that Collins is generous with time for the songs themselves, which we often hear in their entirety (not always a given, even in films about music and musicians). And Joe and his dad are happy to go slow, without the fear of being the only voice.

An old man visits the village to record traditional singing for posterity (something fellow folk singer Shirley Collins was involved in when she visited the American South) and Joe’s dad sings for his tape recorder. It’s a time-stopping performance, though Joe himself refuses to sing in public for years.

There’s a jump to adulthood. Middle-Aged Joe (played by the singer Michael O’Chonfhlaola) is rangy and taciturn. His style of singing is uncompromising, mournful, and starkly graceful.

In a pub, after a boisterous performance from another singer with an accordion and audience accompaniment, Joe sings on his own, eyes closed as he clutches the hand of the barman, as if he can’t not sing. When he finishes, a proffered beer is refused.

The title is apt, and not just because of his rather closed-off, solitary demeanour. Joe works as a labourer before moving to America, sometimes lugging huge rocks into place in dry stone walls. It’s a beautiful landscape and a physically hard life.

America is a different world though the same style of filmmaking is transplanted from rural Irish landscapes to a metropolis. Ladies and gentlemen in hats chat on street corners, though each scene still looks bare and remarkably uncluttered.

Employed as a concierge at the Langham Hotel, he’s smart in his uniform. The shot from the top of the hotel’s winding staircase may be nothing new but here the grey, textured steps look like they’re covered with thousands of tiny pebbles.

Joe doesn’t seek stardom in the US, though a performance at the famous Newport Folk Festival there brings him to a wider audience. We don’t see footage (is there any?) which is a shame.

My one criticism is that narratively Song Of Granite falls rather short. Watching this film, I took away a lot of why?s. Joe comes across as a shy boy and then a phlegmatic, private man, rather unconcerned with shedding lives along the way; and he admits too much water has gone under the bridge to go home (Older Joe is played by Macdara Ó Fátharta). But we never find out his reasons.

Some striking facts about his personal life are thrown into the mix then left. His abandonment of his wife and children is shocking without context. His son relates how Joe went off in 1955 and didn’t reappear until 1961; his daughter remembers asking one of the members of the folk group The Clancys to tell Joe “his wife’s dead and to contact his children. Which he didn’t do”. It would have been interesting to dig a little deeper here, from family and friends. Not to reduce Joe (we are all flawed and most of us can’t sing) but to add more depth and context.

If music is the only way to reach the man inside, the lack of subtitles for the songs themselves, while positioning Joe as an enigma, ultimately also make watching him more frustrating.

Song Of Granite is beautifully shot, a lyrical hymn to a country and a man – but it’s occasionally unsatisfying, like reading a brilliantly intriguing biography with a few key pages missing.

Buy the Song Of Granite DVD from Amazon UK now