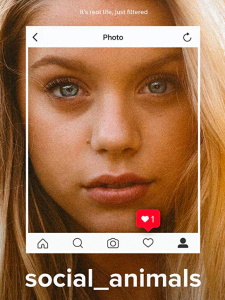 ***  Check out my interview with Jonathan Ignatius Green, director of Social Animals ***

There’s an arresting shot of 15 year old Kaylyn and her girlfriends on the beach, sitting in a row with their phones out. Someone has just noticed a whale in the surf, but it’s unclear whether they are all photographing the whale or themselves.

It’s a scene reflected across social media, where people miss something interesting because they’re taking a selfie, or see it but post of a picture of it rather than enjoying the moment.

This is a gripping documentary, so much so that I didn’t check my Instagram at all. Well maybe once, as I’d just posted about a Mads Mikkelsen movie trailer and wanted to see if it had any Likes. (A few. Certainly not the 600+ in two minutes which Kaylyn gets when she asks what colour she should paint her bedroom walls. Sorry, Mads.)

Watching Social Animals I felt glad to be old, until we got to the bikini montages at which point I wished I wasn’t. Even I, at 47 and more emotionally sorted than I’ve ever been, was affected by the perfect photos of people younger and more beautiful than me, who I’ll never meet.

I do use social media, including Instagram (which now has one billion active users). But being the age I am, I’m far less embedded in it than someone 30 years younger, which is a blessing and a drawback.

Mostly I use it for work, this work, though teenage Emma also sees it similarly. “It’s like a job. I don’t really like it. But I keep doing it. So…”

At times envy-inducing, but more often terrifying, Social Animals lets three teenagers, backed up by a chorus of teens and tweens, explain what social media means to them; how it works and how it impacts their lives, in good ways and bad (sometimes very, very bad).

Its ubiquity, and the pressures (personal and tribal) not to log off, mean it is teenage bitchiness cranked up to the nth degree; proceeding, in some cases, to a horrific conclusion.

He doesn’t need to as Humza and Emma – now always wary and sometimes weary – have been forced to become such experts on Instagram’s effects that they can tell us exactly what it does, how it moulds them, and how they try to navigate its rocky undercurrents.

Kaylyn too comes out with some zingers about life as a social media influencer, albeit unconsciously. After listing the kinds of comments left under her IG posts – hot, pretty – she states “I feel like that’s interesting that people think so highly of me but they don’t even know me.”

Green never mocks them – and it would be so easy to mock Kaylyn, sitting on her enormous four-poster bed, planning her move into fashion, while her dad, who made his first million by 20, marinades chicken and throws out advice.

She seems sweet, especially compared to the malign followers we hear about, though the promotion of a rich girl lifestyle inaccessible to all but a few may turn out to be just as malign an influence on society.

The chorus are cheery, self-deprecating and honest. Everyone is clued up when they shouldn’t have to be, forced to navigate the traps set by others – young girls sent requests for nudes, hours spent preparing for a selfie. One switched-on black girl sums it up perfectly: “you have to deal with the perverts, the disrespectful teenagers, the racists, and the family members!”

Emma, Humza and Kaylyn have all had to deal with the darker side of social media (I wonder if Green and his team had to go looking for people who had, or whether this dark side is now so ubiquitous everyone has a horrible story to tell about themselves or a close friend).

Humza, a remarkable and resilient young man who has built a career as an urban photographer after starting out with a cracked iPhone 4, literally risks his life as he climbs New York’s iconic bridges to show the city in a way that no one else has. The downside for him has been appalling though, as jealously drives members of his own artistic community to attack him for selling out.

Without Kaylyn’s cushion of privilege, his social media life – his life, really – has been a game of snakes and ladders, sending him almost back to the bottom again before he painstakingly works his way back up.

Emma, living in rural Ohio and a pupil at a Christian school, is knowing and self-aware, burnt by a horrendous and sustained IG pile-on. Her story is a cautionary tale of how hard it is to avoid social media unless you literally turn it off, for good.

Kaylyn has seen the dark side too, and though her family’s wealth is protective, what comes across is how easily social media bullying can dodge old-style safeguards.

Mostly Green films them at home, which should be a refuge but isn’t any longer. Comments and posts pop up on screen at speed; it’s an effective technique that illustrates the feeling of being under fire for kids on the wrong end of a social media bombardment or attack.

So why do they do it? Humza speaks eloquently about risk vs benefit. He’s climbing bridges in the dark for what he will get from it: not just acclaim, money and a way out, but for him a perfect shot.

It’s an equation that also sums up social media for young people and particularly selfies. The chorus teens talk about putting up a selfie and deleting it if it doesn’t prove popular; of contests for Likes on identical pictures. Simply putting up a selfie leaves you open to esteem-shredding put downs. The upside is affirmation, and that emotional boost from Likes and complimentary comments.

This is a thoughtful and non-judgemental film that never makes fun, and resolutely avoids bringing an older person’s jaundiced eye to opine on young people’s lives. It doesn’t need to as most of the kids interviewed are already jaundiced by it.

We’ve all heard most of it before, only for once the worst turns out to be true. There are times it feels repetitive; partly because the nature of social media is that the stories become so. Kaylyn is sweet but doesn’t grow – she doesn’t need to. Humza and Emma have been forced into repeating their social media climb-backs, that game of snakes and ladders again.

It is all a bit of a game, albeit a sometimes dangerous one, where bullies don’t feel like bullies because it’s not face to face, and the post with the most Likes wins. Ravi Vora, a photographer doing a photoshoot with Kaylyn, says it’s about using social media to harness opportunities. The Likes are, he says, “Monopoly money”.