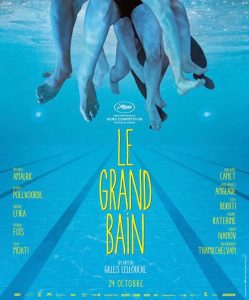 This comedy (its French title is Le Grand Bain) about a group of mostly middle-aged men joining a synchronised swimming team doesn’t dive that deep, and at times it’s as focussed as the random splashing when they first jump in the pool.

But it’s funny, and the issues it highlights are real and devastating: unemployment, depression, poor family relationships, bankruptcy, social isolation.

Bertrand (Mathieu Amalric) hasn’t worked for two years, and has depression – we first meet him mixing brightly coloured pills and capsules into his cereal, like a prescription version of Lucky Charms.

His wife is supportive, his teenage son hates him. Beset with lethargy, he can only just get of the sofa to take his young daughter to the pool; it’s there he finds out about a men’s synchronised swimming team.

His initial chat with Thierry (“call me Titi” implores Thierry, before realising that it means large boob and actually everyone always calls him Thierry) is very casual. Timekeeping is unnecessary, and they might try to get into a league though actually that would require writing letters.

His follow up grilling by coach Delphine, as she sits smoking on the end of the diving board, is much more probing; too much so, considering none of the existing team is graceful or balletic, and some can’t swim that well.

And it’s clear from the start that the team and their training lacks focus, despite Delphine’s well-meaning attempts.

Delphine (Virginie Efira) certainly has her guys’ interests at heart – she reads to them as they practice, and bigs them up to her fellow coach, the no-nonsense Amanda (Leïla Bekhti), but she knows they’re terrible. Delphine is as broken as they are, and doesn’t have the drive to push them to averageness, let alone greatness.

All of the men are struggling in some way. Marcus (Benoît Poelvoorde) is a bumptious but failing businessman – ironically he sells swimming pools but has no customers and owes thousands. Cutting corners everywhere, he torches his van for the insurance money before he’s reminded he’d cancelled the cover.

Laurent’s (Guillaume Canet) anger at himself, his son and his elderly mother has resulted in terrible relationships with his wife and child.

Thierry (Philip Katerine) is aimlessly drifting, cheery but desperate for a partner and a purpose. The world’s lack of need for him is perfectly illustrated working at the pool, where everything is automated and he’s only there to collect the floats.

Despite making 17 rock albums, Simon (Jean-Hugues Anglade) has had not a single hit, and lives in a campervan. Deep down he’s convinced of his talent, though his teenaged daughter is having none of it – “you’re not David Bowie”, she points out, brutally but necessarily.

Late arrival John (Félix Moati) is young, and anxious, but can hold his breath for long periods, a skill he puts down to working in an old people’s home. Rounding out the team are Basile (Alban Ivanov) and Avanish (Balasingham Thamilchelvan).

Their first gala, as the entertainment for a water polo competition, ends with applause that can only be described as sympathetic. But they’re (mostly) still buoyed up, so Thierry searches online for similar groups; and discovers that men’s synchronised swimming has its own World Championships taking place in Norway.

Signing up simply involves coming up with a team name (after much arguing they finally decide on Team France) but training is another matter.

Delphine has to withdraw, so Amanda takes over, almost literally whipping them into shape. First to go is their insistence that taking part is enough – under Amanda’s tutelage they’ll be training to win.

She’s in a wheelchair, but any ideas they have that she’s either easy to patronise or easy to ignore are soon dismissed. Happy to whack anyone who crosses her (completely unnecessarily, as the verbal bollockings she dishes out are terrifying enough) she is as determined to drill them in theory as she is to send them out jogging through their cries of pain.

Gilles Lellouche’s film is funny, though it’s more of an enjoyable romp – the humour is broad and sometimes I cringed. It doesn’t have the subtlety or pain of The Full Monty, the British classic about a group of unemployed men who form a troupe of male strippers. I wonder if that was an inspiration though, especially when team members are practising their dance moves away from the pool.

Team member Avanish, an immigrant, has hardly any lines and almost no back story, which is a loss. The character doesn’t speak French well, but his motivations to join the team, and what is happening in his home life, could have been fascinating and funny. I kept expecting to find out more about him but we never did.

Still, it’s good to have a story about men facing and coping with mental health and emotional issues; and without it being used to claim that women are somehow doing perfectly well now, all battles won. The men all face their own struggles, but their eventual successes aren’t at the expense of anyone else. And they genuinely find within themselves common purpose and camaraderie.

Some characters are over the top – Poelvoorde is initially believable (I’ve met a lot of Marcuses in my time!) but after a while I stopped caring and just wanted him to pay his employee and get back to training.

Efira is haunting and touching as Delphine’s life starts to fall apart. And Anglade is terrific as Simon connects with his daughter while working as a cleaner at her school – finally putting aside the unattainable, and aiming for lower-key glory in Norway. I also loved Bekhti, even though Amanda is completely over the top – she gives no ground.

Most of the team are overweight, but no one is self-conscious; their workouts are purely training-related.

The soundtrack is an 80s corker: starting with Tears For Fears’ Everyone Wants To Rule The World, as we start to meet a group of men who now simply want to enjoy a modicum of success in their own little worlds; Olivia Newton John’s Physical as they practice; and Easy Lover, their championship track.

The film does feel overlong in parts – I could have done with less Marcus and more Basile and Avanish. Luckily when they all head to the championships, the pace picks up. That change of scene does everyone, characters and viewers, a lot of good.

The ending will have you raising your eyebrows, though the competition is joyous. And as a Brit, it’s refreshing to watch a film about underdogs that doesn’t involve one of our own.