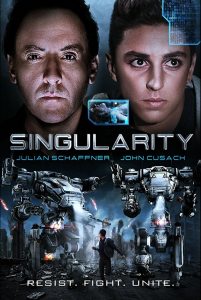 This is a story about mankind versus machine, as killer robots patrol the earth and the few human survivors dream of Aurora – a semi-mythical stronghold in the north, free of all robots. Yes, even those little Roombas which do the hoovering for you.

It’s 2020 and VA Industries, the world’s biggest robotics company, has developed Kronos, a super-computer to end all wars. What could possibly go wrong?

The company is headed up by Elias van Dorne (John Cusack), and just for once I’d like a typically working class Brit to helm such a business – maybe a Thelma Higginbottom, or a Darren Pickles.

Already three in four homes have a robot from Thelma’s, sorry Elias’s company, hopefully doing all the woman-ing like posting pictures of giant glasses of wine on Instagram so we have more time for cooking and cleaning.

VA has previously developed super-powerful military robots but humans have simply carried on with their violent behaviour. So Kronos has been developed to finally end war and maintain world peace.

I think you know what’s coming, don’t you. Humans may be awful but we’re not stupid, well not that stupid, which is why we don’t need the unnecessary voiceover which pops up 20 minutes in.

I did like the line from the VA employee as Elias’s super-computer finally goes live: “It’s activated, sir” followed chillingly with “…it’s asking for you”. And Kronos’s first meeting with his creator is rather fun. But then I love a bit of religious imagery about man playing god and his creation going rogue.

Kronos is now a god, taking over the bodies of both Elias and his brother Damien (Carmen Argenziano); a process which mostly involves giving Damien a funny eye and a glowing forehead.

And he doesn’t hang around; as soon as Elias announces the launch of his technological marvel across the globe, the super-computer starts its work. “The world is now infected, change is necessary if if is to survive” it announces as buildings burn and skyscrapers collapse.

To add insult to (fatal) injury, while destroying civilisation he simultaneously delivers a lecture on how awful we are. Which, you know, I can get from my kids at home.

“Elias what have you done” asks his brother, a rather timid approach considering eight billion people are being murdered.

Fast forward 97 years and the most important thing you need to know is that I am now 146, dribbling, and moaning about young people today. So just like now only dribbling. Actually, just like now.

Oh and a few raggle-taggle descendants of the few original survivors are dotted round the globe. Elias and his brother, robotised, if that is a word, are still going strong though they’re probably a bit lonely.

“This is the story of Kronos and the end of all things” says teenager Calia (Jeannine Wacker) in that voiceover, but we already knew that. She’s a Katniss clone, her arrows sheathed on her back. On her own and on the move, she’s heading to Aurora.

But Calia meets another teen, Andrew (Julian Schaffner), and lets her guard down enough to allow him to travel with her. Andrew is actually a robot, only he doesn’t know it. And Elias and Damien are using him – tracking him to lead them to Aurora.

Singularity is a term often used in sci fi films where they want to befuddle us with faux-physics. And this movie is certainly befuddling.

Things are mentioned then ignored. I’d actually have liked to have heard more about the cavern-dweller survivors – do they ever venture to the surface? Who are they?

The surroundings are far too well-kept, with wide neat paths even though they have apparently been unused for nearly a century.

Timings are confused; the youngsters walk along a railway track that apparently hasn’t been used in sixty years, which I suppose at least indicates the trains continued to run on time for a few decades after the Apocalypse.

These are not really budget-dependent issues, and could have been portrayed more accurately.

Sci fi is supposed to raise the biggest questions, but the biggest question Singularity raises is what the hell is John Cusack doing in it? Apparently the movie was filmed in Eastern Europe a couple of years ago, with scenes involving Cusack added much later. And it shows.

Elias only interacts with his brother Damien, somewhere in their tower block. With his slightly wayward curls and dark rimmed glasses, I originally thought he looked like a dapper, middle-aged Manchester record shop owner, and then I remembered High Fidelity and realised I was projecting onto all those excellent movies Cusack has been involved in over the years.

There’s no tension and the special effects are poor. Though bigger budgets do mean better effects, I’ve seen enough cut-price sci fi movies which manage to navigate the lack of resources by focussing on human interaction and the drama that such a situation would create.

Cusack is ropy as hell, and I’m being charitable. He could and should have added a sheen of professionalism and, frankly, star sparkle. Schaffer isn’t believable though to be fair he is young and he has an awful script. Wacker as Calia shows some promise.

It would actually have been much better not to have Cusack at all, as his presence simply raises expectations. Without him it would simply be a low-budget sci fi movie with echoes of 1970s post-apolcayptic kids’ TV dramas where a bunch of teens run around in a forest in Hampshire.

Singularity does at least have a message – keeping hope alive keeps humanity alive. Actually it probably doesn’t, I just made that up.

This is a very derivative movie. Besides The Hunger Games, I spotted the Blade Runners, the Terminators, Logan, plus numerous made-for-TV flicks. But don’t let that encourage you.

I actually don’t like trashing movies; it’s not easy getting a feature completed, and I’m aware that many people will have worked hard on a film without having much, if any, control over the finished product.

Singularity is a missed opportunity – it could have said something new about artificial intelligence, or alternatively gone over old ground but in a sparky, entertaining way; and it’s a shame for everyone involved that it doesn’t have more going for it.