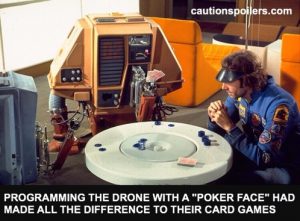 Scifi purists look away now, because the reason I didn’t watch Silent Running for years was because I kept getting it mixed up with Logan’s Run, where Jenny Agutter lives in a world where people are only allowed to live until they’re 30. It’s a fun film to watch in your youth but as you can imagine at my age it’s like the dinosaurs watching a David Attenborough documentary about *that* asteroid strike.

Anyway eventually I realised they were two VERY different films so I decide to give Silent Running a try. And it’s an odd mix. Unsurprisingly the look is very dated – whole banks of screens and keyboards and wall to wall grey boxes just to play Pacman with 48k of memory. Other bits look bang up to date – mainly because cantaloupe melons haven’t advanced as fast as computers or interior decor. But the film is excellent, the story (one of ecological disaster) is very current and Bruce Dern is terrific. (Dern has one of the best Wikipedia job descriptions I’ve read – “often playing supporting villainous characters of unstable nature”).

The Valley Forge is a spaceship just out of Saturn’s orbit, housing six domes attached to American Airlines space freighters. The domes contain animal and plant life, as back on Earth plants no longer grow. A crew of 4 manages the facility, with Freeman Lowell (Bruce Dern) the botanist who looks after the plants and animals. Eventually, they will be returned to earth to reforest it. Lowell can’t believe that after so long their project could be cancelled but that’s what happens – the men are told that the domes should be jettisoned into space and then blown up in controlled nuclear explosions. The crew will then return to Earth and the freighters will go back into service.

Lowell is furious at this and kills one crew member (injuring his own leg in the fight) before sending the other two off in one of the domes to their dome. I mean doom. As the globes are – one by one – fired off into space to be blown up, we get some shots of cute rabbits and squirrels. After the pet deaths in John Wick and the Babadook, I think I reached my limit on movie pet trauma, and in Silent Running I must admit I rather callously transferred my attentions from the fluffy bunnies to the dorky yet strangely loveable drones.

The drones, or robots, are just adorable. They look like triangles on legs, and are painted in those 70s tones used when the retina-breaking brightness of primary colours got a bit too much – sage green, petrol blue, and pale orange. Once he’s on his own Lowell names them Dewey, Louie, and Huey. They have a very sweet waddling gait (apparently this was from using amputee actors within the robots, who walked on their hands). The robots are cute but toughly made, and often venture outside of the spacecraft to make repairs.

With his leg injured Lowell programmes the drones to operate on him. He then sets course through Saturn’s rings, in an attempt to escape with the remaining dome, but during the bumpy ride Louie is lost, and soon after on the ship Huey is injured.

Lowell has taught the drones how to play poker, and it looks as if he would be quite happy spending the rest of his days drifting through space with his plants, animals and robots. But unfortunately another ship is coming for him and he realises he will be discovered. He therefore plots to jettison the last dome with the last fully working drone, Dewey, into deep space. Having done this successfully, he then blows up the Valley Forge with him and the injured Huey on it.

The last scene is – considering Dewey looks like something made out of a giant Dairylea cheese triangle, some poster paints and a slinky – rather moving, as he lifts up his child’s watering can and continues watering the plants, all alone in deep space. One hopes that since then he’s been rescued and now manages the kind of intergalactic farmers’ market that appears regularly on far flung planets in Star Wars films and Doctor Who.