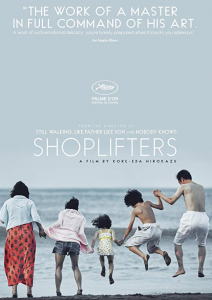 According to Osamu shoplifting is morally acceptable as “whatever’s in a store doesn’t belong to anyone yet”. Though it turns out that this family takes the “not belonging to anyone” reasoning into other areas too – decisions which actually seem in some ways less morally dubious, when they find themselves taking home a little girl called Yuri.

Shoplifters – which won the Palme d’Or at this year’s Cannes Film Festival – starts off a heart-warming though realistically pragmatic tale about a poor family crammed into a tiny bungalow in Tokyo, living off their wits, or more accurately, supermarkets.

In the last quarter, though, Hirokazu Kore-eda’s film offers an extraordinary denouement. Our assumptions, which have been slightly questioned as the drama has unfolded, are, if not turned on their heads, then given a damn good pummelling. (I would almost call it a thriller, though as the hints appear slowly and often from offside if it is then it’s a retrospective one.)

This is an extraordinary film, one overflowing with warmth without ever lurching into sentimentality, emotional but never manipulative, without bitterness but never letting us off the hook for the family’s situation. It’s a film that asks a lot of questions about what makes a family, and how an unorthodox one can survive long-term within the structures of society.

The Shibata family – grandma, dad, mum, son, and auntie – soon turn out to have rather more complex links than that brief family tree implies, and later it becomes more tangled still. Grandma’s husband had another family, auntie is mum’s half-sister, dad may or may not be dad. Even Yuri may not be Yuri.

But whether or not they’re linked by blood, marriage, or long-finished love affairs, they’re a family created by the everyday connections borne of affection, shared jokes, confined living spaces and lots of delicious food.

The practicalities of survival mean everyone, whatever their age, has to contribute to the family finances.

Osamu (Lily Franky) works on construction sites but supplements this insecure income by shoplifting with young Shota (Kairi Jyo); using the boy to pack his rucksack with groceries while Osamu pretends to fill his basket. They steal to eat and to sell on. Grandma Hatsui provides her pension, and the tiny house. Mum Nobuyo (Sakura Andô) works at a laundry, aunt Aki (Mayu Matsuoka) in a peep show.

Then, after finding a small girl on her own, Osamu brings her home for the night, even as family members grumble. Yuri loves gluten cakes and croquettes and she’s got scars on her arms.

The warmth of the family is often in conflict with the need to survive; initially some people aren’t keen on her staying, until they work out snippets of what she’s been through. They stop trying to return her to her abusive parents and she becomes one of the family, which means food, old wives’ tales parenting, and learning to shoplift.

As Yuri settles in, this close-knit group becomes even more so, with family members brought together and remembering why they love each other in the first place. Every situation feels entirely natural and entirely real.

It’s easy to assume Hatsui (the late Kirin Kiki in her last role) is the matriarch; she certainly provides some structure with her old-school remedies. And she knows everything: “did something happen?” she asks Aki after the young woman returns from a stint at the peep show and snuggles up. “Your feet are colder than usual”.

Yet Nobuyo seems to have the steelier core, and be the driver of past events. And although it appears to be Hatsui’s thawing that eventually means Yuri is welcomed in to the family, it’s really Nobuyo whose maternal feelings are gradually exposed from beneath that brittle exterior. It’s Nobuyo who, when they first try to return Yuri to her parents, clutches hold of the girl as she hears the child’s mum and dad screaming at each other that they don’t actually want their daughter.

Months go by and Yuri appears on local TV; her parents still haven’t reported her missing but Social Services eventually start looking for her, and the family know they’ll have to be more careful if they want to keep her.

The Shibatas are mostly off the radar, a situation that the wealthier residents of Tokyo presumably prefer. And it means while they can’t ever move up they can get by.

Eventually, though, one of them decides on a course of action that brings them into contact with the authorities. If their previous existence was financially insecure, this turn of events threatens to shatter the bedrock of their relationships. The confused blood and legal ties mean that the strong unit they’ve all created together turns out to have little in the way of official foundations, and the question arises whether their self-forged bonds will be enough.

Watching the Shibatas there a real sense that they’ve been pushed down by society and are just taking their fair dues; Grandma does the same, guilt tripping her husband’s second family by turning up on their doorstep and pocketing their proffered money. Even later as the story gets darker and their motives more questionable I still found myself on their side.

The performances are engrossing even as initially nothing much really seems to happen. Miyu Sasaki is quietly watchful, saying little as Yuri follows her new unofficial big brother around and learns how to get by. And Sakura Andô is superb as she moves from initially slightly brittle, very pragmatic mother figure to strongest player in the drama, as we learn she’s been the lynchpin of the family in every way since it came to be.

Please watch Shoplifters, though perhaps not on an empty stomach: the soup, the noodles and the croquettes are the one distraction.