You are here: Home / Film Reviews / Sheep And Wolves 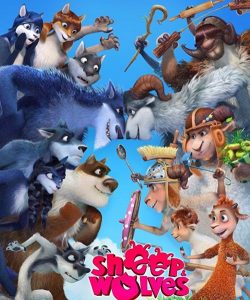 In a land far away, a wolf pack has pitched up in a canyon, eager to make camp and settle down for good.

Nearby is a village of happy sheep, but when the over-enthusiastic young wolves begin to plan the demise of their new woolly neighbours, their old and wise leader Magra holds them back – this wolf pack only hunts for what they need, not simply for the fun of it, as “every life is sacred”.

Once they’re settled in their new home, Magra (Jim Cummings) wants some changes – specifically, he feels it’s time to step aside for a younger wolf. And according to the ancient traditions which he holds dear, this means the strongest wolf in the pack must fight any challengers for the leadership.

Both Grey (daft and somewhat lacking in gravitas and experience) and Ragear (cunning and only out for himself) put themselves forward, and a duel is planned. A proper fight, despite Grey’s rather brilliant suggestion of a dance-off instead.

Grey (Tom Felton) has a girlfriend Bianca (Ruby Rose), and I hate to say this but at this stage he’s punching above his weight. His silliness eventually grates even on the long-suffering Bianca though, and she leaves him.

Realising he has to grow and change if he wants to both win her back and win the coveted role of the pack’s Top Dog, the young wolf visits Mami, a gypsy chipmunk whose family are passing through the area in their traditional caravan. I don’t believe in magic, and frankly I’m not convinced Mami does either, relying as she does on fortune teller props and trinkets. But she does agree to give Grey a potion to help him change.

It certainly does that, after spewing out clouds of bright pink smoke, though turning into a ram probably wasn’t what Grey had in mind. Like all good tricksters Mami then legs it, leaving the newly-horned, newly woolly Grey rather lost.

Luckily he’s found by Lira (China Anne McClain), a sweet sheep who takes him back to her village. She’s being wooed by the rather bashful (even by sheep standards) Moz, and we almost end up with a love triangle, as Grey – tall, dark and ever so slightly lupine – is quite a catch.

When poor Moz brings Lira a flower at a dance, he sees her with Grey and promptly eats the bloom in dismay, not unlike those disastrous dates which begin with being stood up and end with you scoffing that whole box of Black Magic you bought them on the way home.

But while Grey is settling into his new flock, back at the wolf pack danger lurks, as Ragear begins to make his mark; forcing Grey to act in surprising ways to keep his new friends safe and get back home himself.

But will it be enough for Bianca? And can the wolf pack and the flock of sheep survive the onslaught Ragear is planning when he takes over the pack?

Sheep And Wolves is mildly humorous and frenetic rather than laugh-out-loud, and my two children (6 and 8) weren’t massively engaged by it. The animation is nothing exceptional, though it is an exceptionally pretty film (possibly too garish for some). The grass is very green, the sky is very blue, the flowers and butterflies every colour of the rainbow.

Even the darker hues used when we visit the wolf pack in its stony camp have a richness, the blue-greys of the rocks muted but still with depth.

The story is simple and its moral spelled out, though for the age group Sheep And Wolves is aimed at, there’s nothing wrong with that.

This is a sweetly amiable film. it doesn’t stand up against the kind of Hollywood animated blockbusters we are used to, with their knowing parent-aimed humour among the pratfalls and bottom jokes, but it’s a charmingly diverting watch.

Amusing rather than funny, Sheep And Wolves does have a few good jokes. I liked the flock leader’s exclamation, when asked to show some bravery, that “we’re sheep not Navy Seals!” In fact he was one of my favourite characters, looking – with his huge  curly horns – like a cuddly Krampus. (We will leave to one side questions as to whether sheep by their very nature could ever have a leader.)

Its portrayal of female characters is unfortunately very old-fashioned; when the wolf pack are enjoying a firelit feast, the females dance alluringly or walk around with plates of meat on their shoulders, while the males sit around the fire. I’m all for realism, but not here.

Like all good fairy tales there’s a message among lupine and lamb chops. “Our strength is our unity” says Grey, which did rather remind me of the slogans on those Russian worker posters full of women in boiler suits that I used to put on my wall back in the 1980s in a bizarre hope that if the USSR incinerated us overnight I would somehow be protected.

Small children certainly need to learn about working together, empathy and how to think of others, and Sheep And Wolves is an agreeable way to encourage those feelings in the very young.

It’s also about friendship, and looking past difference to the character inside. A valid and necessary message of course, and one many adults  could do with re-learning. Though when it comes to sheep and wolves, it’s always worth reminding your woollier offspring that they should also keep their wits about them.

buy / rent sheep and wolves on vod or buy the dvd from amazon.com