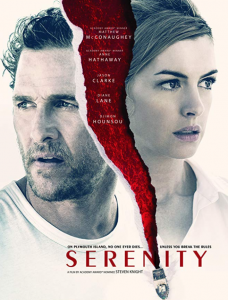 WARNING: Serenity has some big issues as a movie but most of them relate to the bonkers twist. And as I want to talk about those issues I’m going to have to spoiler it. Maybe watch the movie then come back afterwards!

Tuna and Dill. It could be a BBC Sunday night detective serial, about two young men running an organic farm café by day and solving hospitality industry-related murders by night.

Actually Dill is a fisherman and the tuna is a giant fish that eludes him. Its shadow lurks under and around his boat, but it always escapes. Man and fish, inextricably linked, as is often the way between two foes in a movie. Can one exist without the other?

He even gives the tuna a name, Justice, which is a bit like when my little sister got a kitten and we gave the eight week old, weeing bundle (the cat, not my sister) the rather ponderous monicker of Socrates.

Baker Dill (Matthew McConaughey) lives on the beautiful Plymouth Island. His life is certainly repetitive, from taking tourists out on his boat to catch big fish, to having sex with the sultry Constance (Diane Lane). But who wouldn’t like to do the same things each day in such a gorgeous place, all white sands, turquoise seas and brightly coloured town full of heart-of-gold locals?

Then his ex-wife Karen (Anne Hathaway) turns up in the island’s only bar. She wants Dill to murder her second husband Frank (Jason Clarke), a hugely rich and very violent construction magnate who she ran off with while Dill was fighting in Iraq – and she’ll pay him $10 million, in cash.

It’s clear Dill never sees Patrick (Rafael Sayegh), the tweenage son they had together, though father and son seem to be connected by their thoughts.

Her plan is for Dill to take Frank out on his boat for some big guy fishing, get him drunk and push him overboard, to be eaten by sharks. It’s a simple plot and one I’d have liked to see play out, with some soul searching by Dill, and some hot ex-sex, before watching evil Frank being literally eaten by sharks. How satisfying that would have been. Because Serenity isn’t satisfying, though it is overwhelming in its brightness, melodrama and many, many loose ends.

The movie arrives on these shores on a wave of, well, disbelief really. It’s had terrible reviews, and despite its stars agreeing to promote it, the big roll-out never came. Anne Hathaway even took to Instagram to defend it, while acknowledging the response it’s had, in a post which just made me love her even more (even if I can’t find it in me to love her film).

Writer-director Steven Knight’s movie is very odd. I’m a big fan of oddness; I actually like watching honourable failures that try to do something different, but fail wildly; or potential works of genius that go spectacularly off the rails.

Ignominious failures are a different matter though, and there’s certainly a question to be asked over whether Serenity is a stab at something different or simply self-indulgence. The former is welcome. The latter is not, considering how many would-be filmmakers never get a chance to make a movie, failure or otherwise.

It’s not a total disaster; it looks stunning. Plymouth Island is somewhere I’d happily be stuck, repeating the days over and over. It’s a brightly-coloured artificial world, the turquoise shipping container where Dill lives on the cliff, the scarlet village houses, Constance’s green interior decoration toning with her green-patterned robe that she keeps on every time she has sex, even the traffic light colours have an enhanced quality about them. Its natural world too is gorgeous, the morning sky a watercolour of mauve and pale blue.

The costumes work hard, particularly Karen’s; her red lipstick and thick, dyed blonde waves perfectly offset by her crisp white dress or silky nightie. Sometimes she looks as if she’s stepped out of a remake of Agatha Christie’s Evil Under The Sun. Other times it’s noir to the max, as she walks down a rain-drenched jetty in the dark, the bright lights behind her, wearing a black trench coat and a black hat. It’s obvious, too obvious really, and combined with the melodrama screams parody. But you can’t deny she looks amazing.

The big twist is revealed in its entirely at about the one hour mark, though you may have worked it out before hand. To paraphrase the strapline from another movie starring a big name actor which was utterly panned, they gave us all the clues.

Serenity is billed as a steamy thriller but the sex between Constance and Dill, sex she often pays him for, is always the same and is actually very coy: him on top, her still with her robe on, before he gets out of bed, pulling his trousers up over his naked bottom. The repetition goes beyond a merely routine lifestyle (there are shades of Groundhog Day and The Truman Show). And there’s clearly something other-worldly going on: at one point Dill literally can’t move out of bed until his alarm clock goes off at 5am.

Some of the acting is utterly over the top; Karen’s first words to her ex-husband sound laughable, like the start of a French and Saunders sketch mocking a wartime noir (to be fair the rest of the time she’s fine, considering her script, though I get the impression few of the actors knew what was wanted of them). And then there’s the tuna called Justice.

It all makes the film feel one-dimensional and unsteady, lurching from one half-finished idea to the next, as if from the mind of a child. And that’s because it is.

Plymouth Island has been created by Patrick inside his computer. It contains several games, including Dill’s ongoing attempts to catch the huge tuna. Dill himself died during the Iraq war; Frank, while still an abusive brute, is not rich but a construction worker.

For Patrick it’s a way of escaping the situation at home. In the game Frank is pulled overboard and dies; in real life Patrick kills him, then joins his father in the game.

So Serenity is a film about a story written by a child. Is that why it feels unfinished and derivative? If Knight has made it so one-dimensional and childlike deliberately, then maybe it could, with some tweaks, have been a work of genius.

You can see why he has Reid Miller (Jeremy Strong), a bait salesman who’s been chasing Dill down, divulge all the secrets just over half the way through. It does make you look at the film in a more forgiving light.

Or maybe it’s just unfinished and derivative. I honestly don’t know. And unfortunately at the end of the day (and another day, and another day), Serenity isn’t well-enough constructed to overcome its problems, no matter what the director’s aim.

Actually it would have made a good 35-minute short, with the twist only revealed at the end. They could’ve called it Me, You and the Mothefuckin’ Tuna, which is a direct quote from the film.

Serenity is available in the UK on Sky Cinema. Watch the trailer now: