You are here: Home / Film Reviews / Secret Of Marrowbone 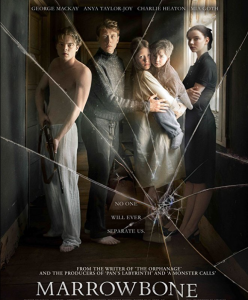 “He’ll never leave us. Not even dead” cries Jane (Mia Goth), about their evil father, a vicious brute who will try to kill anyone, even his children.

Their terror is palpable, which makes one wonder why their mother took them to the one place he’d look for them outside of England – her childhood home, the isolated, beautiful, and peaceful house called Marrowbone.

But she does her best to protect them, before she dies – warning her children to stay together, and create a safe place in the wardrobe. What children don’t hide in wardrobes, among the comforting scent of their mothers’ clothes? Well I did, anyway.

Still, every cloud has a silver lining – at least the paragraph above should help my SEO score. And as I’m going to talk about the twists and turns, the Secret of Marrowbone will soon be secret no more. So henceforth I shall call it simply Marrowbone, and yes, big spoilers ahead.

This is another of those films with parallels to my own upbringing: four siblings left alone in a dilapidated house, a ghost in the attic. I even recognised their mum’s dark brown wardrobe, just like the one full of my mother’s clothes: 70s paisley dresses, 50s ballgowns.

Though that’s where the similarities between our childhood and the Marrowbones’ end, thank goodness.

Marrowbone initially positions itself as a psychological ghost story, with three brothers (Jack 20, teenager Billy, Sam 5) and teenage sister Jane, living miles from the nearest town. With Jack not yet 21, if they want to stay together they have to hide her death. “We are one,” he announces, though often it’s more dictatorship than collective.

Jumping forward six months, there’s been a haunting, ending as quickly as it began. Windows are cracked, mirrors shrouded with dust sheets.

Jack (George MacKay) is the only one who ventures into town, buying groceries and selling Jane’s homemade cakes. He also visits his sweetheart Allie (Anya Taylor-Joy), who works in the town library.

I was sure this was set pre-war, the war being the First World one, though it’s actually 1960s – a grainy TV screen in the general store is showing the moon landings. But back at the house the air is timeless and heady with honeysuckle and lemonade.

Despite the ghostly goings-on it’s not a spooky house (nor was mine!). Which should have made me realise this wasn’t going to be a psychological horror with kids torturing themselves over clanky old water pipes and raccoons scratching around the attic.

But cracks are forming in their relationships. Billy (Charlie Heaton) is angry his brother always gets to go to town, and see Allie, while they have to stay at home.

Outsiders intrude. Tom Porter (Kyle Soller), a local lawyer also sweet on Allie, brings round documents for their mother. Jane forges her signature, and they pay the legal fees with English pounds from a tin box of notes taken from their criminal father. Later, Tom blackmails the siblings for the remaining cash.

They are chalk and cheese. Where Tom is refined and quite literally buttoned up, the children live in vests and baggy trousers, their faces sheeny with late summer heat.

Despite director Sergio G. Sánchez’s superhuman efforts to scare us with crashing music and jump-scares (it works, even as we know we are being mocked!) the story soon becomes a thriller.

The ghost was made up by the older children to explain away screams to 5 year old Sam – screams from their prison escapee father who found their American hiding place but was then walled up in the attic to die.

It’s a turning-the-tables on history moment. Old newspaper reports, revealing his awful crimes in lurid headlines, show Jane was abused by him; walling someone up is a technique we hear about in spooky tales from the Middle Ages, young women left to die behind stone castle walls.

He’s still haunting them – but is he alive or dead?

I’m not particularly renowned for guessing movie twists, but even I worked this out. Even before Allie finds a book handwritten and illustrated by Jack, explaining their lives. (British parents may feel the drawings of jaunty children up hills and on beaches remind them of that classic We’re Going On A Bear Hunt).

The last few minutes are an exhausting watch and by then it’s all a bit of a pudding. An unctuous pudding, with cream, but an overegged one.

So many ghosts, but not the ones you expect. Their father had already murdered Billy, Jane and little Sam up in the attic, before Jack alone blocked him in. But dad is still alive, living off rats and mice, drinking rainwater. It makes the earlier part of the film much scarier in retrospect, that he was up there all along.

Jack is ill, with multiple personality disorder and possibly epilepsy too – his siblings now live only in his head.

The performances are anything but overegged. George MacKay is a brilliant mess of adult and child, arrogance and fear, shoring up his lonely existence from within his prison-haven. Taylor-Joy is rather underused, for an actress who’s always (sorry) such a quiet joy to watch.

But my favourite was Matthew Stagg as little Sam. Cheerful one minute, crying over his dead mummy and sniffing her clothes the next; summoning all his bravery to walk down dark stairs to collect fallen dice from a game. And wrapping himself in a sheet, unutterably terrified, when he ventures into his mother’s locked bedroom.

I’ll admit I cried when he did, and again at the end when it turned out that bravery and grief was a creation of Jack’s mind. I’m embarrassed how easy it is for directors to manipulate me now I’m a mother.

Marrowbone runs from spookyish psycho-drama to florid, overcooked horror, with an increasing mood of almost gleeful melodrama. It doesn’t quite work but it’s certainly an enjoyable, if bumpy, ride.

Its mysteries eventually turn out to be rather straightforward – just exhaustingly, depressingly sad.