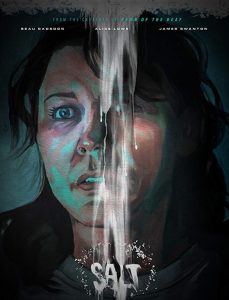 “Just stay inside the circle” says a mother to her dangerously sick daughter, as she has to leave the girl in their bedroom, the bed surrounded by a circle of salt, to go downstairs and find her medicines.

Made on a tiny budget and released just in time too scare your socks off at Halloween, Salt is a short film from award-winning director Rob Savage about a demon that can be temporarily held at bay – but for how long?

Alice Lowe plays the mother and Beau Gadson her daughter. Trapped in a home that’s littered with the evidence – both medicinal and religious – of her attempts to protect them, they’re already barely living.

This is a short, sharp shock of a film (it’s only two minutes long) – genuinely frightening and with several heart-sink moments. The house has a real sense of claustrophobia despite its size; the blue-grey light means we can see everything, or at least we think we can. The tension is relentless, the demon terrifying.

Lowe is excellent as the mother, willing to face anything to help her child. And I was never sure if this was a supernatural story or if it was all in the mother’s head, her fears for her daughter holding them captive.

Hats off too to James Swanton, somewhere in that demon costume, leaping and whacking like a murderously demented spider.

Savage is the BIFA Award-winning director of Dawn Of The Deaf, and he used the same crew to make Salt. The film has already won Best Horror Short at the Hollyshorts Film Festival, and was selected for this year’s London Film Festival, Fantastic Fest, Frightfest and the London Short Film Festival among others.