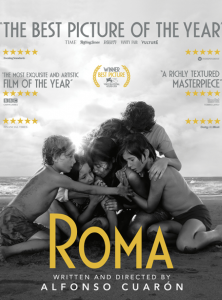 Roma is a very beautiful and a very sad film, and it’s a sadness drenched in the stoicism of those who hold little sway over their own lives.

Not frenetic (despite the family’s four children rushing everywhere and fighting all the time) and not languid, it’s a supremely evenly-paced and unromantic look back at director Alfonso Cuarón’s own childhood – through the eyes of one of his family’s live-in maids, Cleo.

It’s still an emotional journey though, not least because of what makes its characters deal with upset and tragedy in the way that they do.

Shot in black and white (Cuarón was also the film’s cinematographer), every scene has a clarity and a freshness that never looks moody or broody, and despite its 1970s styling also doesn’t look dated. He lingers over shots longer than you think possible as the action moves from home to streets, town to countryside, celebrations to potential disasters.

Roma is the area of Mexico City where Cuarón grew up (apparently he recreated his childhood home almost exactly as it was for the film shoot). This is a middle class district and a middle class, white household, which means two maids/housekeepers, both of whom are indigenous Mexicans: Cleo (Yalitza Aparicio) and Adela (Nancy García).

Mum Sofía (Marina de Tavira) is a biochemist; her husband Antonio (Fernando Grediaga) is a doctor, often away for weeks at a time, increasingly so now that their marriage is crumbling, and eventually he leaves for good.

The house is big but not huge. Upstairs there are open spaces among the bedrooms out onto the landing, so it looks like a dolls house with the front pulled back, as we observe life unfolding for them.

Cleo is one of the family when it suits them. But that status can be withdrawn at any time as Sofia vacillates between friend and employer. There’s a telling moment when Sofía, Cleo and the kids are piled on the sofa together snuggled up watching TV, until their mother sends Cleo off to make a pot of tea for Antonio.

Later when Cleo discovers she’s pregnant, Sofía is sympathetic and helpful, with no thought of making Cleo leave, but Cleo doesn’t know this before she tells her employer. It’s a gift for Sofía to bestow. (Thanks to de Tavira’s portrayal, Sofía is still a sympathetic character, if privileged and flawed – even before Antonio leaves she’s left to manage the relationship between woman employer and woman employee. She also has to face life as a single mother, while protecting the children from too much change. Before her husband leaves on one of his business trips, she clasps him from behind in a hug, a desperate act of a woman who knows she’s lost.)

Sofía and Antonio have four children: three boys and one girl, Sofi, who is always being warned not to get fat. And a doting granny who buys them treats to solve arguments. There’s a dog, too, who poos all over the tiled driveway, a walled entrance with big gates into the road, but not covered over.

Antonio loves his car and edges it slowly into the space, with equal minuscule gaps each side. Everyone watches his skilled manoeuvres and he seems to like it. Sofía is not nearly so adept, her rather brilliant solution being not to learn how to do it but to buy a smaller and nippier car.

I couldn’t work out if the dog muck was an allegory or a joke. The family pooch isn’t allowed out (every time the big gates open there are cries to someone, usually a maid, to hold onto the dog.) Each time we see the drive (which is a lot – it’s their route to the outside world and a barrier between the two) there are yet more deposits, and kids and adults dodge them almost with disinterest.

Antonio is cross about it, and about the general mess, though the house looks pretty tidy to me. Cleo hardly ever seems to just go out and clean it up, or maybe she does, constantly, and it’s one of those tasks where if you don’t do it, it’s a problem and if you do it nobody notices.

The city is busy and clean, though unrest is brewing. They’re in a furniture store buying a cot for Cleo’s unborn baby when paramilitaries outside attack protestors angry at the government’s repressive practices (1971’s real-life Corpus Christi massacre).

This is a woman-centred story and both main male characters (Antonio and Cleo’s boyfriend, Fermin) are unpleasant (the children don’t make much of a mark individually but they’d be noticeable by their absence, a bit like Cleo’s unremarked-upon constant cleaning and tidying.) No women seem to have much agency, least of all Cleo.

The jump from life to death seems also almost unremarked-upon even though the emotions are sometimes overwhelming. A baby dies; another, in its little clear plastic bassinet at the hospital during an earthquake, survives while the cot’s lid is covered in rubble.

Aparicio is excellent. There’s a passivity to her as she’s buffeted by personal relationships and dramas, ingrained misogyny and bigger national change, but her face has an extraordinary depth to it. Cleo is almost entirely dependent on other people’s reactions: her employer, and Fermin, who disappears when she tells him she’s pregnant.

There’s water everywhere in Roma from the enormous amounts of it sloshing down the drain in the opening scenes as Cleo mops the drive, to the hailstorm which sees the children rush to collect the frozen droplets, to the sea at the end. The waves are noisy, the beach so vast and empty, the children drawn to the water despite its dangers.

Near the end Cleo pulls two of the children out of the sea when the currents threaten to carry them away. She can’t swim but goes in anyway. Sofía and the children seem overwhelmed. She’s definitely, definitely one of the family now.

But then they get home and almost instantly she’s carrying washing downstairs for them as they settle back into their home. (You could argue that while this indicates low status within the family it doesn’t mean she’s not part of it. If the family couldn’t have maids, presumably it would be Sofía and the children’s grandmother who would be doing the washing, the tidying and cleaning up the dog muck.)

There’s really not much of a plot, as this is a slice of life, Cuarón’s remembrances and a gorgeous tribute to his nanny Liboria “Libo” Rodríguez (to whom the film is dedicated). It moves forward, directed by different forces, and maybe afterwards its protagonists could join the dots on some kind of story arc.

Roma is available to watch on Netflix