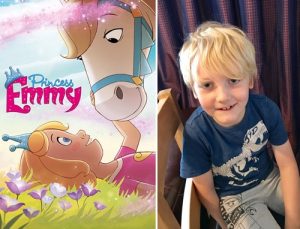 In Princess Emmy she has a gift because she can talk to her horses. Her favourite horse is called Ceasar. I talk to my cat but she doesn’t understand that many words.

In the film Princess Emmy lives in a castle with her family. Her cousin Gizana is mean to her. She comes to stay because they are having lessons in how to be a proper princess then they are going to the Princess Ball. It is in a few days and they are very excited.

The film reminds me of Horrid Henry when he goes to his cousin Steve’s house to sleep. His cousin is horrible to him all the time and then makes Henry get the blame.

Emmy has a special book and if she loses it she won’t be able to talk to her horses any more. The first princess who could talk to horses was Carlotta and she wants to test Princess Emmy even though Carlotta is dead.

I got mixed up with the tests for being a princess and for her gift.

I think I wanted this movie to be performed in real life instead of a cartoon.

I recognised Princess Emmy was the voice from the little girl in The BFG when she started speaking. Then when Princess Gizana came in I thought that’s Mildred Hubble from Worst Witch on TV! The actress is called Bella Ramsey so I asked Mum if she is Gordon Ramsay’s daughter and Mum said no.

Later on in the movie Emmy says “I wonder where she keeps her broomstick!” because she doesn’t like Princess Gizana and I thought “that’s a Worst Witch joke.”

When Emmy and Caesar get to Carlotta’s Tower to find out if Emmy is good enough to keep her gift there are stone arches and pink flowers growing up them which is a pretty nice detail. Then a pink tornado appears. There is quite a lot of pink.

I liked the exploding thermometer! The housekeeper has a stinky ointment and when she puts it on Emmy’s foot Mr Vincenzo falls over ill so they take his temperature.

It was also really funny when Princess Emmy skateboarded down the stairs by mistake and everything landed on Frau Zwickelmeier who has come to help them get ready for the Princess Ball.

The saddest bit is when Emmy has lost her gift and they’re going back to the castle on the horses and Gizana looks sorry for everything that she has done.

I think it is aimed at little kids younger than me (I am 7). It is quite short but it felt quite long. Princess Emmy is quite good but it’s not my favourite film this summer holidays which is Angry Birds 2.

Watch the Princess Emmy trailer and scroll down for images from the film: