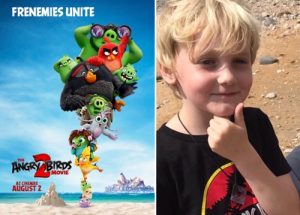 Today I went to see The Angry Birds Movie 2 with my mum and brother. I really didn’t want to go. I didn’t think it would be any good as I used to like Angry Birds but don’t any more but… IT WAS SUPER GOOD.

At the start the green pigs and the angry birds are having a prank war, they’re basically total enemies. Then they have to have a truce because a wicked eagle called Zeta from Eagle Island wants to kill them all so she can relax on their warm islands. (Her island is frozen.)

She has been firing big ice balls at Piggy Island and Bird Island and they have to sneak onto her island and shut down the superweapon.

Red (Jason Sudeikis) from Bird Island had no friends when he was little and he’s scared that if he isn’t protecting the island he won’t have any friends again. Silver is a very clever bird and Red has to learn to work in a team with Silver (Rachel Bloom) and the others to beat Zeta (Leslie Jones).

When they get to the island they all hide in a giant blue bird suit. They follow a guard to the toilet and then they have to pretend the blue bird is having a wee by spitting out water which was really funny.

Red was my favourite character and I also liked Chuck (Josh Gad) who is a yellow bird. The film looked pretty but I can’t remember any of the songs.

My favourite bit was at the end when the baby chicks floated off into the sea. There is a really sad bit too when a little dog who is Zeta’s pet is frozen in a block of ice. Then the ice melts and just when he is looking forward to having fun, it freezes again. Mum thought it was funny but I thought it was sad.

I thought the film was just right and not too long and not too short. It was very funny and I liked how some of the actors had to act like they were stupid.

Watch the trailer for Angry Birds The Movie 2 (scroll down for images):