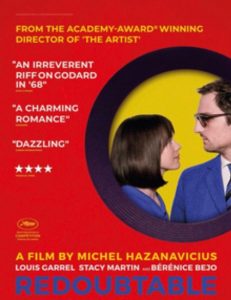 I wouldn’t exactly say that Redoubtable is set to the backdrop of the 1968 Paris unrest. The revolutionary fervour that swept the city in May that year is used more as a prop for Jean-Luc Godard in particular scenes, and like the director himself the film pops in and out of marches, stone throwing and fights with police.

Godard claims to love the workers but once out of the throng, his attention moves to getting dinner at a decent restaurant.

As the city simmers, Godard (Louis Garrel) is captivated by his younger girlfriend, the actress Anne Wiazemsky (Stacy Martin). She is 19 to his 36. Her latest role for him is in Le Chinoise, whose failure with critics and Chinese officials alike depresses him, though his witty mournfulness is initially rather winning (by the end of the film it’s like listening to a cineaste Eeyore).

After a much anticipated visit to the Chinese embassy, he returns bemoaning the fact that “the Chinese said my film was shit… they said it was the work of a reactionary imbecile”.

Anne and Jean-Luc do marry, though their relationship soon starts to crack. Still, they get a great press conference out of it, as they head to the Auvignon Film Festival with Le Chinoise, where the journalists constantly question him about his new bride and what her famous author grandfather (Francois Mauriac) must think of it. It’s a delightful scene, as they sit at trestle tables under a tree, rows of press in front of them, Godard teasing and rebuffing in equal measure.

Poor Godard. With revolutionary fervour offering the workers and students a voice, and Godard a way out of the stifling bourgeoisie, he’s determined to close the door on his past successful movies. The only movies that should be saved are “Jerry Lewis, the Marx Brothers. The rest can go in the bin”.

The problem is that the workers and students soon turn against even this great filmmaker. He’s his own worst enemy, and his contributions, though greeted with cheers, often proceed to jeers, then boos. One speech he gives to a hall full of revolting students turns horribly anti-semitic.

Godard is well aware of the frequency with which middle class intellectuals try to co-opt workers’ struggles, and is happy to talk about himself in derogatory ways. But this too seems like a conceit. He’s only a visitor, flitting between demos, political meetings, nice restaurants and literary salons, all on his terms. He never quite understands the disconnect between him and the revolutionaries, though everyone else sees it clearly.

As May unfolds, Anne stays with friends at a beautiful cliff-top house while Godard is in Cannes getting the famous film festival shut down – with help from François Truffaut. Unfortunately the general strikes paralysing France, which Godard claimed to want, turn out to be thoroughly inconvenient when he then wants to get back to Paris by car, and petrol cannot be found.

Eventually they manage the return trip, all 800km of it. But with several people crammed in to the tiny car, all of different political and cinematic leanings, it’s a hilariously dreadful journey for all concerned.

Fans’ demands that he return to making “funny films” is a constant source of irritation. Others want to show they understand him. One man, approaching him after writing a thesis on Godard, seems to be the 1960s version of that scourge of modern director Q&As, offering more of a (rather long) comment than a question. Godard’s comment on film to everyone is simply that cinema is dead now; and to Anne that he has sore feet from marching and running away from police.

Godard is a jealous husband, persuading Anne to turn down a starring role in The Seed Of Men because she’d be required to be naked in nearly every scene. He’s wrongfooted when the director writes into the script the discovery of a chest filled with women’s clothes, meaning Anne’s character is always dressed while her male fellow shipwreck victim is always nude. Meanwhile Godard is filming Pravda in Czechoslovakia.

There’s a terrific scene where he and Anne, both naked while brushing their teeth, discuss nudity in film. He is against, blaming his upbringing. She is in favour and says she would do it if the story requires it. It’s very funny, especially as of all scenes in the film featuring a naked Stacy Martin (Garrel is nude in just this one scene) this is the one that the story most requires.

Garrel is enjoyably dour as the arrogant, brilliant director. His battle to control Anne as she outgrows him and finally walks away is increasingly desperate, matching the desperation he feels earlier in the movie that the young revolutionaries will like him even as he sabotages his relationships with them.

Considering this film is adapted from Anne Wiazemsky’s own book (the actress died in 2017, aged 70 – Jean-Luc Godard is still alive), she very much takes a back seat. Sometimes Anne is little more than an appendage to the film, as she appears to have been to the man himself. She’s much more interesting when she sheds the wide-eyed ingenue persona and begins to care less and less for her husband’s feelings – suddenly it’s Martin commanding the screen beyond her chic outfits.

Redoubtable (the name comes from France’s first nuclear submarine, a programme about which they hear on the radio – in France the film is known as Le Redoutable and in the US Godard Mon Amour) is gorgeously styled. Anne wears short A line dresses, or little mini skirts with round-necked thin-knit jumpers. Her hair is a perfect shiny brown bob. All the other women have slightly lower hemlines, slightly messier hair.  Godard is balding, with those famous glasses – which seem to be, for Godard, the main casualty of the revolutionary fervour, as pair after pair are broken while running away from the police.

I’ll admit I don’t know enough of Godard to say if this is an accurate portrayal, though having seen Agnes Varda’s magnificently enjoyable documentary Faces, Places last year, in which her friend Godard features loomingly but in absentia, Garrel’s take on the man looks perfectly believable.

Director Michel Hazanavicius finds interest and humour in many different styles: subtitled thoughts, speaking to camera, a sardonic voiceover, and even the music (that excruciating car journey trundles on to the sounds of Magic Moments). Though the different and often temporary styles can leave it feeling very much a surface movie.

Redoubtable doesn’t dig very deep – into Godard, or the political scene at the time –  but it’s great fun as a lightweight comedy of ill manners, thoroughly mocking the great auteur.

Buy the DVD or Blu-ray from amazon uk