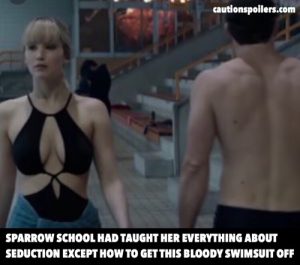 If you’re a fan of nostalgia, you may well appreciate Red Sparrow, a spy mystery filled with utilitarian buildings, grey skies, and kohl-rimmed eyes peaking out from beneath fur hats and huge fringes.

Starting off in Moscow, it then moves to Budapest, Vienna and London, playing out like a traditional Cold War thriller; complete with Seduction School for Spies, floppy disks and good old-fashioned torture.

Only it’s not set in the Cold War, but in the present, something I only realised when Matron, who runs Sparrow School, snootily dismisses the West as “drunk on shopping and social media”.

There’s nothing wrong with a solid espionage drama that isn’t in thrall to smartphones and the internet. But here the sexual assaults feel exploitative, the torture scenes go on and on, and it’s so long if you started watching it when the Iron Curtain came down in 1945 by the time you left the cinema you’d be expecting to bump into Mikhail Gorbachev.

We first see Dominika on the Bolshoi stage in a brilliant scarlet tutu, before a horrific accident mid-dance leaves her leg permanently damaged. (Don’t look if you’re squeamish, though if you are squeamish the torture scenes later may make you long for the simple shock of a broken and twisted leg.)

It’s a situation made even more painful with the realisation that as the ballet company own her apartment and pay for her sick mother’s helper, she needs to find a new career.

Luckily she has a powerful uncle in Vanya (Matthias Schoenaerts), though unluckily he is second in command of the SVR, the Russian intelligence agency. And family doesn’t mean much to Vanya, with every favour coming at a price which just increases over time.

Vanya sends her off as bait to entrap a politician, and then when she witnesses the man’s unexpected bloody demise uses that as leverage to force her to attend Sparrow School, or as Dominika herself calls it later, Whore School. Though to be fair as well as learning (in front of other students) how to use their feminine and masculine wiles for their nation’s gain, they also get to fiddle with electronics and shoot guns.

Matron (Charlotte Rampling, proving her brilliance by keeping a straight face) is in charge of teaching her creme-de-la-creme class one thing: “learn how to be the missing piece… and they will give you everything”. Find out what your prey wants and make sure they get it, whatever it is; learning this lesson at Sparrow School can mean being commanded to give a political prisoner a blow job in the classroom.

Dominika is a very bad student, as she tries to act on the advice her mother gave her: “you hold something back, that’s how you survive.” But despite this, she’s soon being sent abroad by uncles in high places to befriend Nate Nash (Joel Edgerton), a CIA agent who has been working with a Russian mole in Moscow but is now in Budapest.

Everyone is an enemy to Dominika, whichever country they claim to work for, though she vacillates between playing her cards close to her chest and revealing information about herself. For a long time she and Nate circle each other; Dominika is certainly a mistress of knowing when to walk away leaving a man wanting more.

It’s a dance in a way, as she uses cliched techniques (bleaching her hair, wiggling along the side of the swimming baths in an eye popping swimsuit as he walks past) which she knows he sees right through. Yet he’s still determined to bring her onside. And just because he knows what she’s doing doesn’t mean he can’t be entrapped by it.

Even with her impressively impassive exterior, Dominika’s motivations develop realistically over time and experience: from rage and love to revenge and even ideology. But her supposed relationship with Nash seems so passionless I couldn’t work out if that was a plot twist or simple lack of chemistry. Edgerton just looks blankly confused a lot of the time (as did I).

Schoenaerts is horribly creepy as the Vladimir Putin lookalike who has always taken too much of an interest in his late brother’s daughter.

Thin and wiry, Jeremy Irons’ General Korchnoi flits in and out, terrifying in public and stoic in private. In his creepy 70s spectacles he’s always the scariest presence in the room, even when up against Hinds’ more physically imposing Colonel Zachary.

I loved Mary-Louise Parker, an alcoholic mother who tries to sell American secrets to the Russians. Her character Stephanie is beautifully, brilliantly out of her depth despite her high-powered career; her daytime drinking providing a dangerous sense of invincibility. Stephanie’s few appearances contrast perfectly with the all-male meetings in ornate Russian offices between the medal-draped sociopaths of the SVR.

Cliches abound, though to be fair maybe that illustrates how predictable we are as a sex-loving species. In fact everyone seems so desperate for a shag I’m amazed any secrets have been kept at all over the last few decades.

But ultimately it’s a film that feels exploitative and dated; Dominika is raped, assaulted, and victim-blamed. And while torture has its place in certain stories (god knows there are times I’ve felt my skin was being slowly peeled off while watching a particularly turgid cinematic masterpiece), less is more.

Francis Lawrence also directed Constantine, one of my favourite films and an extraordinary mix of fire, rain and nihilism; Red Sparrow doesn’t have the style of that movie or of its most recent rival, Atomic Blonde – which while it didn’t entirely work at least had enough shock and awe to break up the silliness (or possibly it was the other way around).

But while Lawrence’s bleak European capitals and chilly off-white skies are a spy movie staple, I rather liked Sparrow School’s twisted aesthetic of utilitarian uniforms, with rows of gilded youth shedding their own skins as they learn the art of seduction for the benefit of the state.