You are here: Home / Film Reviews / Racer And The Jailbird 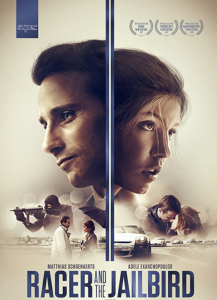 When a man tells you what he is, listen, especially if he’s admitting to serious crime.

Her wealthy father (Eric De Staercke) is more wary and tries to catch him out with smiling questions, and a warning. But that doesn’t stop the two of them – she the racer, he the, well you can see where this is going, can’t you.

While in some ways that English language title is self-explanatory – she is a racer, he is indeed an on-off jailbird – in other ways it’s very misleading. It sounds like a 1970s comedy, probably starring Burt Reynolds. And while there are funny moments this is actually a drama that, despite the sex-filled fizziness of their relationship, becomes very downbeat, with a last act that feels both melodramatic and rather manipulative.

They both start off free and both end up imprisoned in some way; though their relationship, built from the kind of suffocating interdependence that can easily become a prison itself, stays remarkably true to its fizzy beginnings.

But overall this is an odd film, with a last act that doesn’t fit; and tonally it’s a very mixed bag. Luckily the performances, particularly Exarchopoulos, keep it watchable, along with the big set-piece action scene.

Bibi and Gigi – it sounds like a designer clothing line set up by two rich girls who can afford to move straight into a shop on Marylebone High Street doesn’t it – have a relationship that from the first is witty and equal, or it would be if it were based on honestly. She knows something is up, and wants to know why they never go to his apartment.

They are a couple from across the class divide – she had a wealthy, cosseted childhood, he was in a juvenile home. But while those are common themes, I liked that Bibi and Gigi’s character traits occasionally subvert each other; in a way that is typical in real, ordinarily complex people, but less common in film.

She’s a racing driver, but she also wants to take care of everyone, like her absent mother did (I assume she died). He is a gun-toting criminal, but he’s also scared of dogs (something I can completely relate to having been terrified of them growing up. And yes I know I have a dog but I also have children and I’m not overkeen on other people’s kids either).

They meet at the race track and he’s very upfront about liking her; they agree to go on a date, after one of his shady business trips, though she stipulates “no flowers” (something I can totally relate to unless they come with their own vase and already cut into a nice arrangement which frankly only women seem to be able to order).

Like many criminals who fall in love, he decides to settle down with Bibi after that one last job. And it’s one hell of a job, including a stupendous action sequence (the best in the film) involving a giant shipping container and a motorway bridge.

But like every cinematic “one last job” it goes horrible wrong. Soon Gigi is ratting on his friends (all of whom actually took like Burt Reynolds in a 1970s comedy) for a shorter prison sentence. Though considering Belgian prisons are apparently happy to allow conjugal visits, and day release into the outside world, to be honest it doesn’t sound like it should be that unbearable.

Soon they’re trying for a baby, in prison. (The scene where their post-coital cuddles are replaced by him lifting her legs up as high as they can go, while it might look to some as another sexual position, will actually be familiar to many women trying to get pregnant post-40, or indeed with a Belgian prisoner partner.)

But things take a turn for the worse, and that’s when the film becomes desperately bleak and frankly very odd. It also becomes much more of a two-hander, as in the outside world Bibi responds to some shattering news by putting herself into a sort of solitary confinement, and Gigi is seen mostly on the end of a prison payphone.

Their worlds become much greyer, and much more violent, their love for each other the only bright spot.

She tries to do something huge for him, but it seems to hinge on a throwaway comment of his (ironic as his first confession to her was treated as a throwaway line and shouldn’t have been). It acts as a mini tremor, as their relationship has been the solidity on which they, and the movie, sit. It makes you wonder how much they really knew each other – he lied about his criminality; and their bubbly, sex-filled existence seems to have had no foundations after all.

The original title, Le Fideles, refers to trust. There are two big double-crossings, both of which affect Bibi in different ways though she’s not the instigator of either. Their love for each other is never in doubt though, and it’s all-consuming. But ultimately you have to ask, can a relationship survive if it is initially based on lies? His dishonestly hangs over their relationship like a shadow.

Exarchopoulos exudes the relaxed confidence money can buy as the independent and sexy Bibi, yet still manages to infuse her with a wariness that makes it look as if she knows she is somehow doomed (I’d have loved to have heard more about Bibi’s mother and how much Bibi is, like many heroines before her, almost embracing shocking life events that could lead to history repeating itself).

Schoenaerts is great as a juvie kid who can never quite leave that behind; he still has a boyish impulsiveness that gets him into trouble, though it’s tinged with caution. He’s always holding something back. His options become fewer when he falls in love with Bibi as he loses the freedom he had before, as a boy from nothing with nothing to lose.

But overall this is a very up and down movie and I came out as much bemused as deflated. It seems almost nihilistic though I don’t think it’s meant to be.

Despite the two central performances – they are totally believable as a young couple in love and lust, with an impressively long-term level of commitment to each other – I was left with the feeling of opportunities wasted, and not just Gigi and Bibi’s.

buy / rent on vod from amazon.com