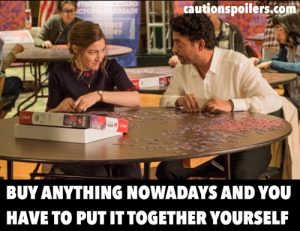 It turns out there’s more than one way to complete a jigsaw, and my own tried and tested technique – corners then edges then screaming in frustration – won’t win you a Best Puzzler cup.

Initially Agnes (Kelly Macdonald) just turns over the pieces and dives in. Her new and experienced champion puzzler partner Robert (Irrfan Khan) teaches her to take time to walk around the table to get the bigger picture from the piles of tiny pieces, then divide by colour.

Puzzle’s director Marc Turtletaub (this is a remake of Argentinian director Natalia Smirnoff’s 2009 film Rompecazbesas) unfolds Agnes’s story without resorting to cliche, and in return I promise to avoid all puzzle-related puns. This is a movie rich in allegory though, so expect some metaphorical jigsaws.

I used to think jigsaws were dull, and I didn’t have the patience. Then I had children and discovered they were something we could do together. Soon I was finishing them even after my kids had wandered off, while I continued, eager for that feeling of triumph as the last giant piece of Peppa Pig slotted gratifyingly into place.

Agnes only discovers her love of puzzles when she’s given a 1000-piece jigsaw for her birthday, though she’s been finding patterns and putting things back together for years. The night of her party, her husband Louis (David Denman) breaks a pretty plate; while she searches under a chair for the missing piece it’s clear she needs to find it to complete the puzzle rather than, as she claims, to stop someone standing on it and hurting themselves.

Soon she’s travelling to the New York puzzle shop where her Aunt Emily brought her the jigsaw; then, after seeing a note there from expert puzzler Robert asking for a new puzzle partner, uses Aunt Emily’s broken foot as an excuse to travel to the city to train with him for the national championships.

An avid watcher of bad news from around the world, Robert does puzzles to bring order to the chaos of existence, from exploding volcanos to his own one-off invention that has accidentally made him millions. He doesn’t even believe in pattern; to Robert, his life has proved it’s all coincidence. Agnes’s new hobby does the opposite, plunging her family into chaos as they find themselves unable to cope without her to cook dinner at the right time.

Puzzle is about several people (but mainly Agnes) finding the right place in the world where they can slot in. Something which increasingly disrupts life for those (especially her husband Louis) who already think they and everyone else are in the correctly allotted spaces (even if they too would be happier doing something else).

And there are puzzles, patterns and sequences everywhere, including some I probably invented. I did recognise the perfectly put-together rhythm of the everyday life of a homemaker: tiring tasks, that must be done in a particular order, but the same pattern as any other day, and sometimes providing genuine satisfaction on completion. As her love for puzzles grows Agnes has to slot her metaphorical jigsaw of tasks round it (a jigsaw around a jigsaw sounds very meta and they should probably invent an app game for it).

I liked how on her first train trip into New York everyone else on the platform is engrossed in their mobile phones, something which is taking people out of one space (real life), you could argue to our detriment. But the same phones may also be depositing them in just the right place for them online with likeminded people who finally understand them.

Agnes has spent her life sacrificing her own needs to those of men: her father after her mother died when she was young, then her husband and her two (now teenage) sons. You could probably also add to that Jesus and her priest, who has a circle of women keeping all the church events and outreach going.

This is a slow-burn movie and at times I was desperate for us to get back to the buzz of another puzzle, which though a criticism is only a slight one – these puzzlers are fast. (There’s also a comfortingly expected scene when a nearly completed jigsaw is angrily swiped from table to floor.)

Khan and Denman are first rate, but it’s Macdonald as the blossoming Agnes who blows everyone out of the water, in a performance of subtle intensity and often humour.

She’s a timeless character in many ways but also one initially difficult to place in a particular decade. At first I thought the film must be set in the 40s or 50s, but really it’s just Agnes’s old fashioned life.

Her break out, as she starts moving forward and pushing back, is believable; many of her responses to Louis’s alternate anger, tears and bewilderment were not what I expected, even though the movie moves in an expected direction. And Agnes’s flashes of passion when faced with both the slightly dishevelled Robert and a particularly fiendish section of jigsaw are a delight.

It doesn’t all ring true. We’re expected to believe that Agnes would travel to New York to buy jigsaws from a special jigsaw shop. While it’s made clear she wouldn’t instantly know how to google on the new iPhone she got for her birthday, she could surely have popped down to the nearest department store or toy shop to buy one – unless this is meant to be seen as an early attempt to escape the confines of her life which even she doesn’t fully realise yet?

As she blossoms so do her outfits. Granted, she finishes up in what can be best described as Mum at Marks and Spencer. But the gradual move from plain, dark-coloured shapeless tops to those with slightly more fit, then on to colour and complementary patterns, is a pretty encapsulation of her growing freedom. First a baggy navy shirt, then a gently skimming cream sweater with sea-blue stripes. Then a t-shirt with pretty green floral detailing, worn with a loose-fitting short-sleeved green and white spotted jacket; by the end a cream dress with red flowers and green leaves is matched with a vibrant red cardigan.

The ending is what could best be described as finishing a complicated jigsaw and finding the last few pieces missing. We know pretty much what the whole picture will be, but there’s no need to show us.

ENDING (and spoiler…) BELOW

Agnes does something entirely for herself – she goes to Montreal alone on the train, rather than to Brussels with Robert for the jigsaw championship.