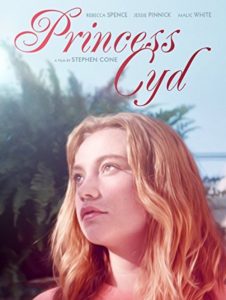 Once upon a time, aged 17, I went for an interview at one of our better redbrick universities – to study English, no less – and confidently told the don in front of me that I didn’t really rate Shakespeare. Reader, they rejected me.

But if 16 year old Cyd were real, I hope it would make her feel better, when she’s older, knowing that she’s not the only one to display an at times insufferably super-confident worldiness about a world she still has much to explore, and understand.

Cyd (Jessie Pinnick) has no problem making her beliefs known and she certainly doesn’t defer to her elders. “The chair in the corner makes for a really nice reading nook,” says her aunt Miranda (Rebecca Spence), a well known novelist, looking for common ground as she shows her niece her bedroom, a room that was Cyd’s mother’s. “Oh, I don’t really read,” replies Cyd airily.

Cyd is a high school soccer player who lost her mom in a tragedy nine years earlier. Her father suggests she spend a couple of weeks in Chicago with her mother’s sister, writer Miranda Ruth.

Both Cyd and 40-something Miranda are lovely people, but the disconnect between the two women is hilariously wince-inducing at times. Sporty Cyd versus cerebral Miranda, the physical versus the metaphysical, as Cyd goes out running and Miranda writes novels with themes of religion and spirituality.

Ultimately both women learn from each other, though part of that is accepting when to stop pushing. Although we see Miranda standing naked and slightly unnerved in front of a mirror, after an interrogation from Cyd about her non-existent sex life, ultimately she simply gets more from snuggling up with a book than with a man. Whereas in some films sex is everywhere, here it’s books that fill the physical and emotional space in Miranda’s life. Cyd’s request for wifi is met with “Ralph Waldo is the name of it and the password is all caps HAWTHORNE with an e, 1850, that’s the year that The Scarlet Letter was… okay…”

When it comes to love Cyd is more tentative, though that lack of experience is mixed with a life-affirming willingness to seize the moment. And it is love that looms largest in Princess Cyd – both as Cyd finds out more of the incidental details of her mother’s early life, those details that make a person come alive again, and as she falls in love with Katie (a touchingly vulnerable performance from Malic White as a young woman prepared to expose her soul in order to find a love worth having).

It’s when Cyd gets lost while running that she wanders into a coffee shop and meets Katie, serving behind the counter. Katie is tiny, like Cyd confident in herself and her look (half-shaved head, piercings), but gauchely determined when the potential for love appears. They meet again, and an undeniable spark overcomes their initial awkwardness as Katie enthusiastically asks Cyd questions about her life and home as if it’s a job interview.

Miranda spends her time writing, reading, teaching and helping writer friends with their work. One such friend is Anthony, who is sort of single (“he’s married, technically”), but Miranda claims she’s not interested. Her circle spans all ages though, and regular soirees bring together friends and fellow writers to eat, drink, and read aloud from favourite authors and their own work.

It’s while clearing up after the latest soiree that Cyd and Miranda come closest to a full-blown argument, when the younger woman’s directness tips into rudeness, and she knows she’s overstepped the mark even before Miranda snaps back. “You know, maybe if you had sex you wouldn’t want to eat all the time” says Cyd. “It’s not a handicap to have one thing but not another” she’s told.

But Cyd’s brusqueness means the religious Miranda has to face some thoughts she’d probably rather leave hidden. “You really think we’re going to see my mom again? … She didn’t believe that. Did she.” says Cyd, more ruthlessly than she probably realises.

Pinnick is pitch-perfect as Cyd, desperate to explore the world, yet still trying to anchor herself after a devastating childhood. With Miranda, Cyd has been given a place and space to blossom from teen to young woman while holding tight to her self-confidence and without making an idiot of herself. Well not much, anyway. Every teenage girl should have a Miranda in her family to do the same for them. I wish I had.

The dialogue is natural and realistic with its interruptions, as both can’t help but try to nudge the other. It’s a jagged process rather than a smooth one, as family relationships in real life usually are.

Miranda has spent so long alone she doesn’t even know if doing things differently might make her happier, bolder, or even a better writer; and Pence offers a quietly remarkable performance as the responsible older woman trying to understand and protect someone whose interests are so different to her own, but just as valuable.

There’s an old-time feel to Princess Cyd, which all coming-of-age dramas should have really. Not only from Cyd’s glorious orangey-red vintage bikini as she sunbathes in Miranda’s garden, and her borrowed bedroom with its white bedstead, duck egg walls and pretty patchwork coverlet. But also beachside scenes where the girls run around shrieking with laughter amid a washed out colour palette (sand, sky, sea) that seems straight out of a 1960s home movie.

The soundtrack is perfect, its changes matching the tonal shifts of the film: softly melodic when the newly-arrived Cyd is discovering the back garden, regal as an 18th century ball as aunt and niece descend the staircase to sunbathe, and more raucous when Cyd is with Katie.

“I wanna not rush things. That’s what I wanna do” says Katie about her life plans, though their story moves forward at just the right speed, and it never declines to that enervating slowness that these summer-set dramas often do. The relationships that Cyd has with Katie and Miranda develop at a perfect pace when time is short but the days are long.

It’s rare to find a male director who understands older and younger women so well. Princess Cyd is a mix of timelessness and modernity, as three women who are so different find the common ground that allows love to flourish.

It’s a film that is lush rather than languorous: “School starts, end of summer bliss” says an elderly woman reading a poem at Miranda’s soiree, and this is a film I was genuinely sad to see come to a close.

Watch the trailer for Princess Cyd: