You are here: Home / Film Reviews / Pirates Of The Caribbean: Salazar’s Revenge 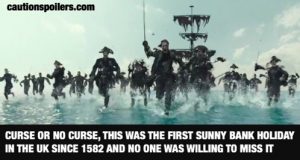 Pirates Of The Caribbean 5 is confusing enough without the two different titles (in the UK it’s known as Salazar’s Revenge but in the US it’s Dead Men Tell No Tales) – with an indecipherable plot and vast numbers of pirates, some already dead but fighting gamely on.

The film is set in the 18th century, so I can’t accuse Johnny Depp of phoning in his performance as Jack Sparrow, but maybe he wrote a message, stuck it in a bottle and threw it into the sea as he really doesn’t do much here but raise his eyebrows and make bad jokes. Which I do too (well not the eyebrow thing, not since I had that botox anyway) but no one pays me millions for it.

Depp can be very engaging in these movies, even with a weak script (and apparently he had a hand in this one) but charm only takes you so far and after four films this should have been a performance that reinvigorated an ageing franchise.

Click here for the Pirates Of The Caribbean: Salazar’s Revenge 1 minute video review

This isn’t a terrible film – it’s a romp which is fun in parts and has lots of blockbuster essentials – set pieces, romance, unexpected family links, and of course a (completely unnecessary in this case) sacrifice. But it’s ultimately disappointing, with weak jokes and an over-complicated story.

Out of the set pieces there is one that really stands out, a joyous scene in the town square involving a double execution – and yes that’s a sentence I never thought I’d write. But it is great fun, as Jack and amateur scientist Carina aim to stay alive as mayhem swirls around them and they try not to let their rescuers kill them by mistake.

At one point Jack (Johnny Depp), already fastened into the guillotine, is being whirled around in the air while the platform collapses round him, and as he spins the blade moves ominously towards him then away, always missing the Sparrow neck by mere inches. It is a genuinely funny scene and if only the rest of the film was as enjoyable.

Carina Smyth (Kaya Scodelario) is an orphan whose father has left her a map that no man can read, a map of the stars, that she is sure can lead them to the Trident of Poseidon – a mythical fork that can remove all the curses of the sea like a paranormal oceanic clean-up operation. She teams up with Henry Turner (Brenton Thwaites), who wants to use it to bring back his father Will Turner (Orlando Bloom) from the ocean floor where he resides in watery gloom on the ship the Flying Dutchman.

Jack Sparrow, so down on his luck that he swaps his magic compass for a bottle (an action which frees Spanish pirate Salazar from his deathly home in the Devil’s Triangle, so he can come after Jack who previously sent him there), is arrested and due to be executed the same day as Carina.

She has been accused of witchcraft due to her interests in astronomy and horology (they try to make every mention of horology – the study of timepieces – some kind of double entendre but I can’t think what on earth they meant, and I’ve not led that sheltered a life).

There are quite a lot of witch jokes which are unfortunately always hard to get right once anyone has seen Monty Python and The Holy Grail (“She turned me into a newt!… I got better”), as most of them simply don’t compare.

Jack’s crew help (or accidentally hinder) in their rescue from their scheduled executions, and all of them sail away on Jack’s ship – the rather fabulously named Dying Gull (his old ship, the Black Pearl, is still in a bottle in his pocket, a great idea and one that would solve all my parking problems. If only we could, ahem, bottle it).

Carina is a forthright woman of science, and the stereotypically feisty young woman that we get in lots of mostly male films. She is let down by weak dialogue and cliches but Scodelario works well with what she is given. And I think most men watching will be as delighted as Henry at the glimpse of her ankle (if her fabulous bosom, always on the point of popping out of her dress, is rather too much for them).

But it’s not as easy as working out the intricacies of the map by looking at the stars then sailing off to find the Trident – well it is, but first they have to fight off the British Royal Navy, and various pirate ships.

Don’t ask me who they all were, I was completely confused by this point how and why some of them were even there. Though they did include Salazar (Javier Bardem), cursed to spend eternity looking like a rotting and waterlogged Edward Scissorhands.

While the plot is confusing, there are some twists that are so well signposted it’s like an 18th century Google maps. And some of the characters seem at times rather enervated, bored even. The movie does look pretty good though – there’s an undead crew, firefights and even zombie sharks. Paul McCartney has a cameo and while his accent is all over the place it is a lot of fun.

It’s an incredibly male film – I’ve seen so many like this recently and in a fantasy movie there’s really no excuse. I get that most pirates were men but let’s face it, this isn’t a film striving for historical accuracy  – they have zombie sharks for goodness sake! – so they could easily have included more women in many different roles. And think of the consumer interest in the heaving bosoms. The women are few and far between: Carina; someone I won’t mention but you can probably guess; Shansa (Golshifteh Farahani – playing a genuine witch, an interesting but underdeveloped character who looks amazing); and an overweight, scabies-ridden prospective bride for Jack whose appearance is played for laughs.

This is certainly a film that feels past its prime. And with Sparrow too a man whose best years are behind him, there is the odd moment of pathos (and the parallels with Depp himself are impossible to ignore even if they are unintentional). No one is that bothered about Jack Sparrow, or inspired by him, and his promises have too often come to nothing.

Ultimately this is a film that promises far more than it delivers in terms of story, humour and most importantly, excitement – in fact one of the few jolts I got was finding out that Jack Sparrow isn’t actually his real name.