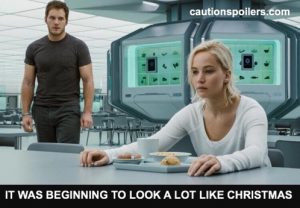 Poor Jim. Waking up 90 years early on a space flight to a new planet, with only a third class ticket. Third class means no frills. Which means Jim is not even allowed a latte, just an ordinary coffee, FOR 90 LONG YEARS.

I know, Instagram posts would drop by a third.

Chris Pratt is Nice Jim Preston, a mechanic heading to a colony planet so he can fix things rather than just replace them, on a cheap ticket with nearly a century of horrible hessian-like meals ahead of him.

Jennifer Lawrence is Posh Aurora, a journalist and daughter of a Pulitzer-prize winning author. She’s got an access-all-nice-bits ticket which means delicious breakfasts and as much hipster coffee flavours as she can drink, were she awake.

Imagine Titanic in a spaceship without the fancy hats and the terrible oirish accents. That would sum up Passengers very well, with added peeping Tom stalkerishness.

5000 passengers and crew are in hibernation for 120 years, en route to Homestead 2, a planet offering a new start for everyone.

But 30 years into the voyage, as everyone sleeps, the ship starts malfunctioning. Nice Jim’s pod opens, leaving him awake and alone, and despite a touching friendship with an Android (Michael Sheen) and never having to do any housework thanks to those little robot hoovers that whizz around everywhere, he’s very lonely.

Nice Jim then has a year of trying out all the facilities, and taking the ship apart then trying put it back together in a vain attempt to get his pod working.

But then he finds Posh Aurora in her hibernation pod, a woman who does what I do when I’ve got an early start and still want to look nice, and goes to sleep in great make-up and with perfect hair, then lies dead still, arms by her sides.

As the months go by, Nice Jim metamorphosises into Stalker Jim as his obsession with her grows and he wrestles with whether to wake her up. He watches her, sitting by her pod while she sleeps, looking her up on the ship’s computer, watching videos of her, and laughing at her not-very-funny jokes. It’s positioned as a moral dilemma, but it isn’t as it’s blinding obvious which is the moral choice.

Stalker Jim does wake her, and luckily for him Posh Aurora falls in love it him. I know, what are the chances? Finding out what he’s done, she’s is understandably devastated. Despite this, Aurora then falls in love with him all over again. Even though Stalker Jim WOKE HER UP, 30 years into a 90 year voyage.

Talk about tone deaf script writing. And it’s not even an oversight, one of those movie situations where something isn’t picked up until an audience sees it. The script addresses the fact that Stalker Jim  woke her up and basically condemns her to death – the problem is that then she falls for him again.

There are also plenty of black holes into which the plot is dragged before it laboriously pulls itself out, covered in space dust. It’s funny when Nice Jim tries to send a message back to earth explaining his predicament, only to discover it’ll take 19 years to get there and he can expect a reply in 56 years. Oh and he’ll be charged $6000. But you would think that after designing a spaceship that can transport 5000 people asleep in pods for over a hundred years, he’d be able to send a quick email.

Passengers has a very small cast. Michael Sheen’s Arthur the android bartender is fabulous: bland, platitude-programmed, always polishing a glass because it unnerves customers to see a barman doing nothing, but ultimately responsible for destroying Jim and Aurora’s cute, loved up game. And Laurence Fishburne is great as a crewman who’s own wake-up process doesn’t go according to plan.

Stalker relationship aside, the ship is incredible; who wouldn’t want to swim in an infinity pool which looks out over, well, infinity? At one point gravity malfunctions while Aurora is swimming, so she and the water start rolling to the ceiling, like a horrifyingly beautiful underwater ballet.

But there’s only so much swimming you can do, and ultimately there they are, together for the next 90 years. And no housework. They must get bored learning to streetdance with holograms much cooler than them, or Jim taking apart and fixing things that don’t need fixing, or trying every type of coffee available on Aurura’s ticket.

Passengers was originally meant to be a $35 million scifi film for Keanu Reeves and Emily Blunt. Just imagine, Keanu happy on his own for 90 years playing Scrabble against the ship’s computer and drinking beer, riding his motorbike around the deserted corridors and reprogramming Arthur with Bill & Ted dude-speak, while Emily, who is a mother, has what all mothers want which is a 90 year snooze.

Then I heard that he actually had a lot of input into the script which, as I love Reeves, leaves me with something of a moral dilemma…

buy / rent passengers on vod or buy the dvd / blu-ray 4k from amazon.com