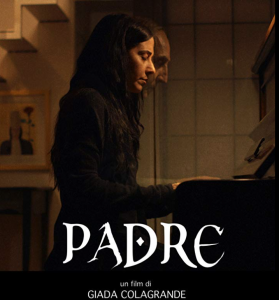 “The space behind you is as important as the one in front of you” says James (Willem Dafoe), guiding his female performers as they rehearse his new play. It’s a good analogy for grief and death as journeys.

I’ve found that when it comes to grief, once that initial crushing of the ribs has lessened, there’s something to be said for enjoying an occasional wallow in sadness and memories – like an enjoyably over-hot bath that you can stand only occasionally and then for just a few minutes.

The paradox with deeply personal films about life events of course, is that when they strike a chord with someone watching, they cease to be about the creator and become drenched in the emotions of the viewer.

Epigenetic movie-making we could call it, a piece of work with its DNA transformed by the audience’s experiences.

The film is based on a series of dreams that Colagrande had after the death of her own father. And it does feel as if she is actually working through her own grief while making the film, that we are on an actual journey with her; rather than sorting one’s thoughts and then creating something from them. It means that watching Padre I felt like both a voyeur and a friend.

There’s a collage-like quality to it, as we switch tones and aesthetics between everyday life, dreams, memories and supernatural visitations. It’s an approach that’s perfect for grief, one minute numbly coping with tasks, the next sunk in old photographs, then seeing them alive again in your dreams.

Giulia’s father Giulio, a famous musician and composer, has died (he’s played by Franco Battiato, a well-known Italian singer and musician). But soon he’s back, visiting her in the house they shared. Visits that are desperately welcomed even if she’s not sure where he’s come from. Sometimes he’s solidly present; other times he seems to be shade or shadow.

He plays the piano for her; despite being unable to play herself she later performs the piece for her friend James. He points out it was something her father had composed for his show. We see James and Giulia (Colagrande) at the rehearsals, as James’s performers draw on the experiences of female artists, women from history or in their own families – that collage-like feeling is reflected in the performances too.

“Distinguishing between true and false seems impossible” says Giulia, but I’m not sure she wants to. It’s an empty house she craves, a house imbued with his memory, as she walks around his ordered study, their home a solitary space for her from which well-meaning friends are excluded.

Death is often a process rather than an instant event; it’s a process too for those left behind. How much do we hold them back, desperate for one more visit or memory?

I enjoyed Padre, though it doesn’t have quite the clarity it could, and for a slow-moving film there’s a bit too much going on at times – long quotes on screen, letters, memories, books, though as losing someone can leave us feeling our heads are a bundle of cotton wool and barbed wire, in some ways that’s part of its movingly chaotic charm.

When I saw the film it was followed by a Q&A with Colagrande and Willem Dafoe (they are married). Dafoe commented that the film is amateur, in the sense of being created quickly and on a shoestring, outside the system.

I wouldn’t say it looks particularly polished, but it is beautiful and Tommaso Borgstrom, the cinematographer (he died after the film was made), highlights the contradictory feelings and beliefs death brings to the fore. Giulia’s father walks across the sand, the film looking old and crinkly like a 1970s home movie. A young, black-clad Giulio turns to the camera. Sometimes colours are washed out, bleached by the sun and by time. Sometimes he’s a solid presence, other times a wraith.

There are moments of unexpected humour too – take a bow, if you can from under all that fluff, star cat Colombo – who lies around, his creamy and pale brown fur perfectly toning with the decor, whether kitchen units or a tapestry chair, as quiet emotions bubble. Colombo looks at the world with enervated disdain. He seems to notice Giulio but as a living presence, not as a ghost as pets are supposed to.

The idea that there is a “correct” way to cope with grief is a popular one, that we must go through the stages on the right order. But that can simply add to more pressure (“Am I doing this right? Am I coping too well? Am I falling apart? Why am I not falling apart?”). This is a piece of art that offers one woman’s journey through grief. Sometimes it’s hard to clarify how we feel, but we can recognise ourselves in other people’s meditations and coping mechanisms.

Padre is as much a celebration of a well-lived life as a meditation on a death, of the joy of memory combined with the growing understanding that a loved one is gone for good. It’s an essential process, though I sometimes think how much easier life would be if grief simply worked itself through without us, a computer program running in the background of our minds.