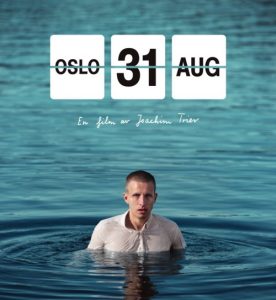 This is a beautiful film. Following 34 year old Anders, a drug addict venturing into the world towards the end of a live-in treatment programme outside Oslo, the dialogue is extraordinarily realistic – not because characters’ comments and responses fit together so well, but because they don’t.

But it is one of those films where you know exactly how it’s going to end.

That’s absolutely not a criticism. But director Joachim Trier sets in motion a progression of events and conversations that is simply inexorable, and can only ever lead to one destination. The question is, does Anders know where he’s going? Is he nihilistic or simply lost?

It’s two weeks til the end of his treatment programme, and he’s been clean for months – he hasn’t even had a beer. So he’s finally allowed some privileges: evening leave, which he spends with Malin, a young woman he has just met, then a day in the city visiting old friends and family before a job interview for an editorial post.

It’s hard to know why he’s making these visits. To kill time before the interview? To try to work out how he will integrate himself back into society once he’s out, or who, from his old life, he might need to avoid? To say goodbye? We’ve already seen him try and fail to drown himself, surely one of the hardest ways to commit suicide as the process must leave every cell screaming for breath, for life. It’s almost as if he wants to do it, but is deliberately setting himself up for failure.

In his group therapy sessions other addicts talk about the void that is no longer filled with drugs, and how can they possibly move forward without another hit. Anders professes to feel nothing, no void, and later admits to having no desire for the beautiful Malin.

Anders looks younger than 34, and reminds me of a youthful Chris Eccleston. He has that quizzical look as if he never quite understands how he has ended up in this position. He has had the same family support and share of talents that of his friends did, friends who dabbled, and may look back on that chaos and fun with nostalgia, but who have now moved on.

Once in Oslo, Anders’ old friends are actually genuinely welcoming, though there’s a sort of mismatch in their conversations. With nearly every meeting everyone is trying to say something else, and never quite gets the other’s meaning. It’s like when someone is walking confidently towards you then veers to the side at the last minute. When Anders is chatting to Thomas, an academic who speaks in quotes and is now stuck in a low-sex, low-fun marriage, it’s Thomas’s wife, who doesn’t know Anders as well, who really understands what he is going through.

If one’s 20s should be about exploration and fun, one’s 30s can so easily feel like endurance and duty. Some of his friends have children and never go out, except to meet up with people whose children their children like. Those men who have stayed single now have much younger girlfriends.

Childless women aren’t enamoured of either option: “My flat’s full of girls I don’t know. 20 year olds with perky tits” says Mirjam at her crowded birthday party, explaining to Anders how ageing is even more challenging and boring for women.

Everyone has a litany of minor wrongs life has dealt them, the kinds of navel-gazing that is incredibly important to those of us going through them, but mind-numbingly dull for everyone else.

And all this as society constantly ramps up our expectations. After his job interview, as Anders is listening in to snatches of conversations in a cafe, he hears a young girl listing what she wants to achieve in her life – a list so long, she could have ticked off much of what she wanted to do in the time it must have taken to write it.

They’re a mix of the sweet, the brave, and the expected, plus those things that means so much at 18 (“reaching and maintaining my ideal weight” made me laugh, I so remember that being a life goal, along with cracking world peace). Those tasks on her list that seem most straightforward, Anders’ friends are finding the toughest (staying married to the same person til they die).

Anders Danielsen Lie is phenomenal as a man gradually realising that the thoughts he has carried most carefully in his head, and the friendships behind them, are probably worth the least. (Reminding Thomas that years ago the academic had claimed that if someone wants to destroy themselves society should let them, Thomas replies “Sounds like something I’d say. I was probably thinking about promoting junk food”).

Thomas never turns up at Mirjam’s party though he’s supposed to meet Anders there. An ex-girlfriend refuses to answer his calls. His sister, angry at his behaviour, stands him up at lunch. Even the family home is being sold, a huge deal for many adult children even if they haven’t lived there in years, but for Anders it’s one more concrete support cracking beneath him.

People’s expectations of life have grown exponentially, and how do we all cope with the mismatch, as jarring as the mismatch between Anders and his friends’ conversations? Why does Anders end up an addict, always at risk of falling back into that life no matter how long he’s been clean, while someone else gets drunk in a bar with a sexy 20 year old or simply whinges about his exhausted wife not putting out enough?

So often parents are seen as good or evil rather than simply blundering through as best they can. Anders’ parents sound like typical benevolent liberal dictators: “She held a tolerant view on drugs. He wanted to ban barbecuing in parks”. But crucially they have left him floundering with relationships: “they never told me how friendship dissolves, until you’re strangers, friends in name only”.

Ultimately once he realises this he seems remarkably clear-sighted. It’s as if he sees the world as it really is rather than how we want it to be, cocooning ourselves in the fluffy comfort of white lies. He realises that though people like him, no one really needs him.