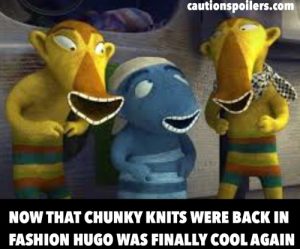 In the interests of full disclosure, I should admit to a prior interest here. I love socks, new socks anyway, and there are few things more pleasurable (that I can put in a review of a family film) than putting on a new pair of soft stretchy socks, to be enjoyed only once before they turn into cardboard during the laundry process. Well one of them does, the other one just goes missing.

Living on their wits and our wool, Oddsockeaters steal our socks. Only one sock from each pair though, leaving all of us scratching our heads, and our one cold foot – the un-Raptured, Left Behind single socks stored for all eternity in the airing cupboard, just in case the missing sock should eventually turn up.

These are Czech Oddsockeaters but presumably French ones have a stolen stash of single ply cashmere; Californian Oddsockeaters living among sun-kissed fitness freaks end up with those annoying trainer socks that fall off after three seconds; and Oddsockeaters from Wandsworth get to chew on organic, hand-woven baby socks that cost £20 each.

The one sock rule allows Oddsockeater leader Big Boss (Gregg Weiner) to claim that he’s a sort of Robin Hood character: “I share with people; one for them and one for me”.

This is a simple tale of good vs evil, clean vs stinky socks, and is gently humorous rather than rip-roaringly funny; it doesn’t come close to the different levels of verbal humour that, say, the Lego movies offer. My six year old loved it, and thought poor Hugo spinning round a rapidly filling-up launderette washing machine was one of the funniest things he’d ever seen (though he was very upset when – spoiler – Grandpa Sock died).

It’s as Big Boss and his clan break into a shopping centre via the TV shop downstairs that we first spy the Professor (Avi Hoffman) across the bank of TV screens. He’s one of the few people who can see Oddsockeaters and tries in vain to get the interviewer to take him seriously.

Shimmying up and down ropes, presumably searching for Sock Shop, the Oddsockeaters always obey the Number 1 rule, except for the rebellious Spike. Big Boss is gruff and demanding: “we are Oddsockeaters and rule number 1 for Oddsockeaters is…” he remonstrates with Spike (Rainer Garrranchan), who likes to take both socks. “I don’t give a fluff!” is the tootsie traitor’s reply.

Meanwhile across town, poor Hugo (Christian Vandepass) has stolen a pair of baby socks for his ailing grandpa: “baby socks give you the best nutrition” the boy says, when asked why he took both, before his aged relative flies away on a current of air, his time up – Oddsockeaters don’t die, they simply fade away. But before he pops his sock-filled clogs, grandpa tells Hugo to go and find Big Boss, his uncle.

Hugo does make it to Big Boss, who fortunately/unfortunately resides, with his team, in the attics of the aforementioned professor. The Professor is desperate to win the Nobel Prize for, I don’t know, laundry? and continues to try to prove the existence of Oddsockeaters, which only he and a few others can see. Oddsockeaters are invisible to most humans, as only the lonely (Oddballs, they’re called) can see them. His house is therefore choc-full of traps set for the little sock-stealers.

Hugo’s long-lost family don’t take kindly to this intrusion, particularly his cousins, identical twins Rameses and Tulamor. But Hugo is just starting to be accepted when they face a new trauma; Tulamor (Clay Cartland) is kidnapped by a rival group of Oddsockeaters (and I think you can guess who the ringleader is).

Soon Big Boss is faced with a demand for an odd sock ransom if he wants to avoid the remaining twin, Rameses (Eric Anderson), becoming an odd sock himself.

The animation in Oddsockeaters is clean and unfussy; the knitted textures of the Oddsockeaters reminding me of updated versions of The Clangers, those 1970s pink-knitted, long snouted creatures who lived on another planet. Big Boss’s family are brightly coloured; Spike’s Blades are mostly darker and grubbier, safety pins poked through their knitted-and-purled rows, though Bladette is bright pink and clean.

It’s a very male movie, with only one female Oddsockeater, Bladette (Paula Barros), from what I could tell. Really, children’s movies should aim to include as many female characters as male unless there’s a good reason not to.

In other ways though, Oddsockeaters is slightly subversive. I liked that Big Boss – who rationalises to himself throughout the movie that he’s one of the good guys, encouraging sharing by only ever stealing one sock – doesn’t have much of a moral awakening, and by the end of the movie is almost as gruff and unsympathetic as at the start.

The film is based on a bestselling series of books from the Czech Republic, and has been dubbed into English, which works well – I guess sock mouths aren’t too specific in their pronunciation, so it never looks false. Though there are one or two songs that, while they may fit with the original Czech dialogue, seem out of place tonally here.

I have no idea if they’ve ever thought of making an Oddsockeaters sequel, though if they do it must surely involve my personal nightmare – the mysterious reappearance of the missing sock once its pair has finally been removed from the airing cupboard and thrown in the bin.