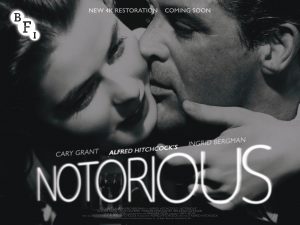 Alfred Hitchcock’s Notorious (rereleased by the BFI in a stunning 4K restoration) pairs Cary Grant with Ingrid Bergman in a nail-biting thriller where an investigation into South American Nazi enclaves becomes entangled with the messiness of human relationships – as both the chilly Devlin and urbane Nazi Alex Sebastian fall in love with Alicia, the German-American daughter of a traitor.

Devlin (Cary Grant) is an American intelligence handler; Alicia (Ingrid Bergman) is his spy, with Alex (Claud Rains) the man she’s sent to investigate in Brazil. It was particularly topical at the time – Notorious was made in 1946, the year after WW2 ended, when Nazis were fleeing Europe, particularly to South America.

This is a simple story with no extraneous scenes or much on the way of subplots. The cast is small but the film’s clarity and simplicity paradoxically add to its dazzle and weight. Bergman and Grant spark off each other perfectly, their chemistry sizzling even as Devlin’s chilly exterior drives Alicia into marriage with another man.

The film opens with Alicia’s father being sentenced to 20 years in prison for treason. It’s a big case, and the Florida press swarm over her as she leaves the Miami courthouse.

Still, her background gives her the perfect cover story when Devlin needs someone to infiltrate a suspected Nazi bolthole in Rio, where Alex lives in palatial splendour with his mother, Mme Sebastian (Leopoldine Konstantine).

Alex has long held a torch for Alicia, and when Devlin arranges for him to bump into her again in Rio he falls for her all over again. Despite she and Devlin enjoying an affair while they wait in the city for the details of her posting, his mistrust of her means when she is reintroduced to Alex, she quickly accepts his offer of marriage.

All Alicia wants is for Devlin to tell her that he loves her. He is often rude to her, brittle, snippy and spiky, and becomes more so when his lack of affection means she agrees to marry Alex.

At times Notorious is bleakly humorous, as the tension mounts (Hitchcock’s direction is like a taut elastic band). After their wedding, a party thrown by Alex to introduce Alicia to other expats in Rio is the perfect time for she and Devlin, who has invited himself, to search the wine cellar – which has become a focus of the investigate after one of Alex’s friends became visibly concerned about a bottle being served at a previous dinner in the house, and then disappeared under mysterious circumstances.

The elegance of their party is like any social situation but heightened to extremes: calm serenity and smiling conversations above, a flurry of activity below. As the two prowl in the basement among the bottles, from upstairs at the party we get repeated shots of the ever decreasing numbers of champagne bottles on ice, waiting to be served. When will the waiters, or Alex, head downstairs for more fizz?

Something I love about American postwar films is that combination of complex characters (particularly women) and how much fun life looks compared to postwar life in the UK, even when lives are at stake. Glamorous parties, flying down to Rio, dressing up to go to the shops (to be fair, I do that now). Alicia is always the epitome of elegance, but always modest, with long sleeved evening dresses in silk and velvet, her neck weighted down with enormous dazzling diamonds. Her outfits contrast with Alex’s over-stuffed, luxuriously opulent home, all marble pillars and gold carvings.

Notorious too is elegantly understated. There are no super-heroics, just humans fighting for high stakes, sometimes making errors, their emotions at times getting in the way of their tasks. There are occasional melodramatic leanings: Devlin and Alicia’s escape, after she’s discovered, is painfully slow with no sense of urgency. Though later speed is less of the essence, at that stage they don’t really know that. Stop talking and get out!

There are no extraneous characters to get in the way. Devlin, Alex, Alicia, US spy boss Paul Prescott (Louis Calhern), and most enjoyably Alex’s mother, who is clearly the brains behind the Rio Nazi operation. She’s awful, but damn clever, and utterly ruthless. Tough and able to think of her feet, she isn’t sparing with her criticisms when Alex realises his wife is a spy. “Stop wallowing in your foul memories” she orders him, and then “we’re protected by the enormity of your stupidity. For a time”, as Alex worries he’ll go the same way as Emil, the man who questioned the wine and hasn’t been seen since.

I’ll admit that, to my shame, I haven’t seen nearly enough Hitchcock, but it’s interesting seeing this overbearing mother / weak son dynamic fourteen years before Psycho. Mme Sebastian is a minor character in terms of screen time but her influence hangs heavy, and when she does appear on screen she commands it. She’s a perfect foil for Alicia as they face off throughout the movie; Alicia is a disruptive influence on Alex who can’t be controlled by Mme Sebastian, or her husband.

Alicia is a complex character, and Bergman shows us every layer: her toughness and resilience, bumping up against her emotional neediness and reliance on alcohol to see her through the pain in her life. Both are stubborn. Devlin won’t let himself unconditionally love Alicia because he’s aware of her past and her family background, though ironically it’s that holding back that means he nearly loses her for good when she marries Alex and her new husband then finds out about her betrayal.

Rains’ Alex is rather a pitiable figure, used by everyone, ruled by his mother, letting his love for Alicia blind himself to the need for discretion (Rains was nominated for a Best Supporting Actor Oscar). Both men allow their love for a woman to affect their work.

This is a 4K restoration, released by the BFI on 9 August – watch it on the big screen if you can. Check out dates and venues on the BFI website.