You are here: Home / Film Reviews / North By Northwest 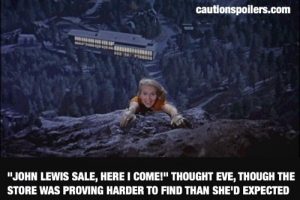 North By Northwest is nearly 60 years old, and is one of those films that demonstrates how much classic storytelling has been narrowed with new technology – I spent the first few minutes of this mistaken identity thriller thinking “Townsend could just google Roger Thornhill, then he’ll know it’s not really George Kaplan!”.

But some things never change in Hollywood, and while Roger (Cary Grant) is grey-haired and probably mid-50s, his co-star and love interest, Eve (Eva Marie Saint) is meant to be 26.

It also shines a light on how acting styles develop over the decades; at times the film sounds almost like melodrama, as characters trade quips and barbs, and an innocent man is literally stabbed in the back before falling to the ground like an overacting footballer. But that’s partly because we are now so used to naturalistic mumbling that beautifully enunciated dialogue can sound false to us.

We only find out well into the film that Roger is an advertising executive, but he already comes across as someone heavy on quips and charm and perhaps a little lighter on substance. “Put a note on my desk in the morning. Think thin!” he tells his secretary in those first hectic moments. And he doesn’t really deepen as a character throughout the film – his journey is purely a physical one. He’s just one of life’s funny, sexy, charmers, and he knows it.

Initially, Thornhill is off to the Oak Bar at the Plaza in New York for a meeting. He’s only been there a few minutes when he’s ushered out at gunpoint by two men who take him to see the mysterious Lester Townsend, who apparently lives in a detached house out of town, and is convinced Thornill is actually a Mr Kaplan.

On finding out that Roger is refusing to cooperate, Townsend sends him off with his henchmen to be killed, pausing only to ensure most of a bottle of bourbon is poured down his throat, but Thornhill escapes and ends up drunk and in a police cell. No one believes what has happened to him, least of all his mother, and when they and the police return to the imposing house of Mr Townsend the next day, the inhabitants’ cover story convinces everyone except the still-hungover Roger.

Soon after there’s a particularly clunky, but rather wonderful round table discussion in the “United States Intelligence Agency” where several men and one woman discuss the case while helpfully providing lots of exposition very quickly, and for that I thank them.

This is a twisty thriller of double crossings and double agents, where no one is what they seem and often don’t know someone else is them. Roger Thornhill is definitely not George Kaplan, though try telling anyone else that. And Lester Townsend is actually Vandamm (James Mason), though the real Lester Townsend comes to a bloodily sticky end in the United Nations building, with a knife stuck in his back. Naturally Roger is accused of the crime, and his startled, guilty-as-hell photo starts appearing on every newspaper in every city.

It’s while fleeing the police and seemingly everyone else that Roger jumps on a sleeper train, where he meets the not remotely enigmatic Eve Kendall, a young and glamorous woman in her late 20s. She takes a shine to Roger, a man old enough to be her father; and after their dinner table talk turns saucy very quickly, she hides him in her cabin, where they indulge in some good old fashioned flirting without taking off any clothes.

But soon Roger is off on another wild goose chase in search of the surprisingly camera shy Mr Kaplan, who books an impressive selection of upmarket hotel rooms in various cities but is apparently never seen in them.

Meanwhile it turns out that Eve is somehow connected to Vandamm; and there’s some microfilm being smuggled out of the country in a particularly ugly objet d’art.

But more importantly, the scene is set for a showdown among, if not all the president’s men, then all the men presidents.

The finale at Mount Rushmore is still genuinely scary, though I should confess I am terrified of heights. And I cannot tell you how impressed I was as Eve started climbing down the rock face, proving that women in films really do it all but backwards and in heels.

North By Northwest is an entertaining, rip-roaring ride, peppered with quips and dotted with scenes of genuine peril, plus the occasional moment that has since become unintentionally funny as times have changed. And speaking of peril, it doesn’t get more perilous than being alone in a flat, dusty and bare landscape, with almost nowhere to hide and a crop duster plane after you.

Despite the vast geographical area the movie covers, there’s a focus on the personal stories of Roger and Eve which means the wider picture (who is Vandamm? Is he an economic criminal only out for himself, or a spy for East Germany or the USSR?) is rather ignored.

Though I did find the dialogue between Thornhill and Vandamm sparkier and more interesting that that between Thornhill and Kendall. The two men sound like equals, and won’t let anything like murder get in the way of a well chosen comment, compliment or threat; Vandamm may be a criminal and a killer but he’s an intelligent one and he isn’t a thug. By contrast the flirting between Roger and Eve does sound cheesy (though not sleazy) to a modern ear. Vandamm’s henchman Leonard is also bright – and played by Martin Landau, his eyes are so terrifying it’s like peering into an abyss of death.

Appropriately enough, Eve’s outfits are to die for, with nipped in waists and beautifully luxuriant rich fabrics. In fact everyone looks so darn elegant. Women are smart in neat dresses and pillbox hats and gloves. Men’s suits are well-cut and pressed with perfect ties.

The movie doesn’t feel long, though the length (it is well over two hours) does mean that some beautifully judged performances from the beginning are almost forgotten amid the later excitement. In particular, Jessie Royce Landis is deliciously disdainful as the mother of Roger, who she still treats as a recaltritant child. I suppose that’s the side effect of a film that really is an embarrassment of riches.