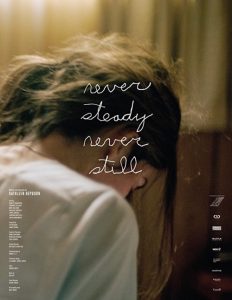 I’m all for seeing your life reflected in a movie, but sometimes it can be a little too close for comfort.

I watched the Canadian film Never Steady, Never Still – about Judy, a middle aged woman living with Parkinson’s disease whose husband Ed dies – four days after my mum passed away.

She was in her 80s but she’d been ill throughout much of my childhood, with one of those conditions where the roles of parent and child come perilously close to being reversed.

Judy refuses to be infantilised, but is also determined almost to the point of danger – of course I worried for her constantly.

She’s been living with her illness for 20 years, nearly as long as she and Ed (a protectively warm and wonderfully bear-like Nicholas Campbell) have been together. Now she trembles all the time and little by little straightforward tasks are becoming unmanageable.

Ed jokes about her illness but lets her hold a wobbling cup of hot tea to his lips when he’s working outside. When she’s upset that she can’t do up her jeans, he does it for her without comment. Imposing, white haired and bearded, his light touch makes him a more effective safety barrier between Judy and her illness.

Kathleen Hepburn’s film is spellbindingly beautiful, though its vistas are desolate; a visual strain of unsentimentality which weaves its way into the story. By winter there’s thick snow everywhere, the lake in front of the house frozen solid.

The enduring grey pebbles on the beach, chilly pale skies, and sober, dark trees contrast with the spare, controlled beauty of the tall gas pump on the fields. The colours seem much richer just before darkness falls, from her son’s blue and yellow work overalls to Judy’s beautiful shiny chestnut hair.

Jamie (Théodore Pellerin), Judy and Ed’s 20 year old son, goes back to work on the oil fields not long after his father’s death; despite it meaning she and their pet dog are left alone to cope in the isolated lakeshore cabin.

Immersed in her condition since childhood, he’s accepting of her suggestion that he leave and live his own life, though the space he craves is more for untangling his own feelings.

When he’s gone she drives to town for supplies, and to attend her support group. The camera focuses on her back wheel, moving erratically over the line in the middle of the road, and back again.

Despite Judy and Jamie’s love for Ed, the two of them seem so used to coping that his death is just part of the difficult flow of their lives, though that’s not to say he isn’t missed.

They’d previously lost a baby. “Death is a gift from god, just as life is”, soothed Judy’s mother at the time, which I can’t see having helped much. But Judy and her husband don’t seem to have been held together by tragedy, or necessity; but by mutual love, affection, and – that rarity – still liking each other.

Jamie is struggling too, emotionally and sexually. The oil and gas fields are a brutal working environment for anyone who doesn’t fit the approved mould, and Pellerin is excellent as a young man whose brain seems to be firing in so many directions at once that title must surely apply to him as much as his mother’s physical problems.

Unsure whether he’s gay, he talks about sex a lot, and has a couple of furtive fumblings, claiming an expertise which only highlights his inexperience.

He gets angry too, but despite the toxic masculinity on show around the oilfields it is a strand which at times can be overwhelmed by Judy’s more visible and more urgent story.

It’s on her trip into town that Judy meets Kaly (Mary Galloway), sweet 17, who works at the grocery store and offers to deliver Judy’s weekly groceries by skidoo. She’s fostered, and pregnant, and a sweetheart, and sees Judy – in their short interactions – not as a disabled woman but as an experienced mother who can give her advice.

Galloway is a delight as the awkward young woman forced to grow up too soon, but retaining that mixture of confidence and diffidence. She and Pellerin have an obvious connection that makes their characters’ relationship feel realistic from the off; Kayly’s conversations with Jamie are very natural, overflowing with the push-pull stilted chatter, pauses, and interruptions that self-conscious teens who fancy each other excel in.

Never Steady, Never Still is quite slow and quite long, and for some the ending will be frustrating. But any bleakness is held at bay by Henderson who shines as Judy, a woman whose determination to see the year’s seasons out in the home she shared with Ed is a genuine triumph.