You are here: Home / Film Reviews / My Life As A Courgette (English Language Version) 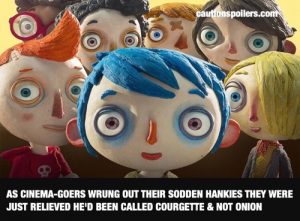 “I’m here as I think I killed my mum” says Courgette (Erick Abbate), a nine year old boy who is newly arrived at a children’s home.

Rewind a short time and Courgette’s mother does nothing but drink beer and scream at him. His father is long gone, so Courgette makes a kite which he decorates with a picture of his father as a superhero. But the kite, although it flies out of his bedroom window in the breeze, is kept firmly tethered, so his dad can’t disappear again.

Courgette has no toys, beyond a stack of beer cans left empty by his alcoholic mother.

Later, explaining his mostly awful home life to Raymond (Nick Offerman), a caring policeman (“The mashed potatoes were always good and sometimes we had fun” he tells the man, desperate to find something to love about his mother) Courgette is told he will be taken somewhere safe. The journey in the police car is perfect. Raymond is a man who understands small children so he puts on the police car siren while allowing Courgette to fly his kite out of the car window – a small moment of utter joy for the boy in a life of turmoil.

When they get to the children’s home the little residents’ faces pressed against the window to watch this new arrival look like those ghostly families of kids you get in horror films set in gothic mansions, but actually it turns out to be friendly and welcoming – with the adults who work there a benign and caring, if sometimes distant, presence.

The children all have issues and ways of coping with what they have seen, and they have all come from heartbreaking backgrounds, with parents who are abusive, ill or absent. Simon (Romy Beckman) is a bully whose parents were both drug users. Alice’s dad was a “real creep” who is now in prison. New girl Camille (Ness Krell), a ten year old who has seen unimaginable horrors, arrives shortly after Courgette and becomes firm friends with him. She’s funny and stands up to Simon’s aggression and mockery. Taught to shoot by her father, she also loves teddies.

But these adults are just shadows now. Every story needs a visible villain and here it’s Camille’s aunt, a vicious young woman who only wants Camille because of the allowances she brings with her. Camille is desperate not to be sent back to live with her, but her aunt can be persuasive and acceptably maternal when the need arises and she’s in front of a social worker or a judge.

It’s fascinating to see power move around the children like a current in the sea, as new arrivals appear to alter the dynamic of who is in charge among them, and previously successful insults are upturned and lose their power. But the children really do manage to navigate their way through their own relationships within the home, instinctively understanding why their friends act as they do.

Lots of people will cry at My Life As A Courgette – I didn’t for once (though I should warn you I still might), as I rarely find animated films as affecting as live action movies. But it is hugely poignant and very moving. It’s also witty – Courgette adds a picture of a fluffy baby hen to the back of his kite as his mum told him his dad loved chicks; when the children discuss their half-formed understanding of sex they describe kisses and exploding willies. But mainly it’s hugely poignant and very moving.

The animation conveys subtle emotions with the smallest of movements. The children’s faces are quite basic with huge colour-rimmed eyes and orange noses, yet the emotional range they can still convey, with just a tiny head tilt, or a quiet handhold, is astonishing.

None of them understands normal family relationships and watching them in a group, bafflement but also longing on their faces as they try to work out what might be happening as a loving mother nearby talks to her small son, is heartbreaking. They are like little sociologists trying to decode what is going on without having the tools to do so. “His mum’s so pretty” says one. “Maybe she’s not his mum” says another.

My Life As A Courgette is very short at about 66 minutes, and unsurprisingly it never drags. It’s a deceptively simple tale as the children deal with circumstances adults would be thrown by, but their childish ways of coping are actually very powerful. It’s also good to see such positive portrayals of police and care workers, though there is certainly a gulf between the children and their carers – several times injustices almost prevail because the children are either too afraid or too accepting to say what really happened.

Raymond the policeman is wonderful, once you get over the fact that he looks like late-career Tom Selleck. A quiet man bearing his own sadness about his family, he has endless time and patience for these abandoned kids and sees something in Courgette that resonates with him.

Any why Courgette? Well it’s what his mother called him, and maybe he remembers it with affection from when the mashed potatoes were good.

If the film sounds quite depressing, weirdly it isn’t. It is matter of fact. It’s upsetting to think about what the children have gone through but and they still retain their childlike love of the world (building snowmen, disco dancing) despite what the world has put them through. Children are brilliant at seeing the joy in a tiny moment and they certainly do this here.

But it is also, at times, devastating. “There’s no one left to love us” says Simon, explaining to Courgette why they are all there when he first arrives, although luckily that turns out not to be true. Because there is a happy ending: “Sometimes we cry when we’re happy, isn’t that right?” says Camille to Raymond, which really sums up everything about this movie.