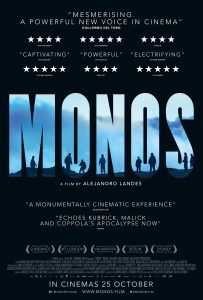 In the midst of Monos‘s scenes of ritual, fighting and bacchanalia, we get to see a clip from a TV show about the making of gummy bears: soft enough to chew but hard enough to hold their shape. It’s a perfect allegory for its child soldiers.

A film that by turns is almost hypnotically somnolent and edge-of-your-seat gripping, the unsentimental yet moving Monos actually feels longer than it is.

Set in Latin America, at first glance this is about the kidnap of a doctor (known throughout most of the film simply as the Doctora). Really she’s more of a linchpin, though watching her as she tries to cope with the privations of captivity and work out how to read the teens guarding her, vacillating between trying to connect with them and plotting her escape, is certainly a key part of the drama.

Initially these girls and boys (mostly teens though the youngest looks about 10) are camped at the top of a wet, boggy mountain in utilitarian concrete buildings, half-underground and half-exposed. The whole set-up looks like a communist castle, its shape rising square from the natural asymmetrical rocks.

They go by nicknames that add a childlike cartoonish quality to their adult soldiering: Wolf, Swede, Bigfoot, Leidi, Rambo, Dog, Smurf, Boom-Boom. (Monos translates as monkeys, highlighting the childish, teenage mischief they should be getting into.)

Much of the time they are outside, bored, playing football, or as night falls leaning into rituals around coupling up.

Some of these are encouraged by the occasionally-present Mensajero, or Messenger (Wilson Salazar), a very short, very muscular middle-aged man who trains them in the ways of soldiers. It’s as much a cult as a troop, as they ask permission to ask permission to partner with someone they fancy.

These are children in the ownership of men, given enough space and isolation to be themselves without pointless rules as long as nothing they do contradicts the Organization’s aims. Even birthday celebrations mean a beating for 15 year old Rambo, given by the other kids while shrieking and whooping. (Rambo, portrayed by Sofia Buenaventura, appears to be gender-nonconforming though it isn’t addressed; something which fits in with the characters’ ignoring of gender and other norms when they’re left alone to be themselves.)

There’s a layer of mist between them and the world below, cutting them off and heightening the sense of isolation. The Messenger reappears occasionally like a 1970s parent to restore order. One time he brings them a cow, Shakira, for milk, on loan from a supporter and to be returned healthy after this incident is over.

But Shakira is accidentally killed by one of the children, and even though we know life is cheap from the start, seeing these teens discuss artlessly among themselves whether the kid in charge of the cow, or the kid who accidentally killed the cow, is most likely to be shot as punishment, is utterly chilling.

An attack by government soldiers means the kids are told to take Doctora (Julianne Nicholson) to a new camp, which means travelling through the jungle along the river in the valley below.

The change of scene tilts the dynamic, as Bigfoot (Moisés Arias), the oldest teen, decides to take charge. It becomes more feral, the younger kids more afraid, the older ones trying to work out who to help or whether to just look after themselves. The Doctora looks to use the this wobbly, disruptive state to escape; the fast flowing river is both a trap and a potential escape route.

This trip along the valley is the making of some of them, though for others it merely puts their vulnerability into stark relief: some become tougher by the day, more steely as each situation becomes more trying, while others are out of their depth.

It’s very Lord Of The Flies as children smear their bodies with mud and blue dye, while trying to throw off the yoke of the Organization, and brings to mind Apocalypse Now as the sweat-drenched mini soldiers make their way to the new camp. (Even early on, the bonfire-lit rituals and dancing on top of the chilly mountain made me wonder if poor Shakira was going to go the same way as the water buffalo in Coppola’s classic.)

Monos highlights the effects of war on children who have to become adults to survive, even though that makes them more legitimate targets from every adult they come into contact with (including the Doctora). They are pawns in a much larger game, used and expendable.

It’s always a fascinating dynamic to witness, as they move from child to adult: their aggression and waywardness is channelled by the Organization, training them with guns. But when they’re on their own the youngsters become less malleable, their volatility given free rein, fighting among themselves.

Everyone has two sides to them, even the Doctora. With no possessions apart from a double compact mirror, looking into it one day, she moves the two halves until instead of two faces she only sees two sides of one.

It’s stunningly shot by cinematographer Jasper Wolf. The dismal mountaintop is damp and misty, yet like kids everywhere, none of the children mind. The skies are sometimes beautiful, blue, pink and yellow. Down in the valley industry bumps up against them, as the river, polluted bright orange, courses past children painting themselves with muddy symbols. Tiny bubbles underwater are shot to look like ice-clear blood. As the rest of the children come together and move apart, Rambo’s red shorts always identify the outsider.

Mica Levi’s score is extraordinary, sometimes ear-splitting, a sound that fills your head, pushing out everything else.

Pre-order the dvd or blu-ray from amazon uk

in the US? rent/buy MONOS on digital now

buy the blu-ray from amazon.com