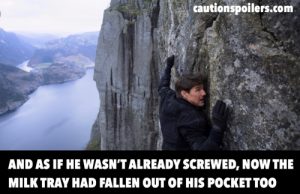 Facing off villains, middle age and broken bones, The Man From A.N.K.L.E is back and better than ever.

This is (mostly) a total blast from start to finish. It only dips when the plot gets in the way; a plot which is is initially understandable but ends up with so much double-crossing I struggled to remember who among the wider cast I should be cheering for, who was a newly-unmasked villain and who had simply been taken in by them. (Note: I’ve added some big spoilers at the very end of this review, below the trailer, in case that’s what you’re here for)

I love the rubber masks, ripped off to reveal someone else entirely underneath, though I was also secretly hoping they would keep ripping mask after mask off each other until all that was left was a collection of tiny pinhead people.

The masks also added a Scooby Doo ambience, and faced with a perfectly innocent character at the end I was fully expecting someone to rip off the guy’s face and the revealed villain to declare he would’ve gotten away with it if it wasn’t for those pesky kids.

I say kids, the team (Cruise as Ethan Hunt, Ving Rhames as Luther, Simon Pegg as Benji) are all getting on a bit. Cruise is, after all, 56 now. That other American trademark, the Giant Redwood, is only 3444 years older. It would be understandable if he occasionally felt a little creaky jumping out of a window, or let out an involuntary “aaahhh!” or “ooohhh!” as he manauvered his way into the pilot’s seat of an in-flight helicopter, after climbing up a long swinging rope mid-air.

But he keeps going, driving the action forward. Mission Impossible: Fallout is relentless, its action scenes going on longer than you think possible while still being knuckle-chewingly exciting. Cruise is its beating heart – amiably taking the piss out of himself while throwing himself into literally death-defying stunts.

Cruise has been around for so long that I’ve adored him, then gone off him, then adored him again about 15 times. I even remember him in Risky Business, the film that sent sales of tooth veneers and London Underground season tickets rocketing (I might as well also admit that to me, Alec Baldwin will always be the blue-eyed sexpot from Knots Landing).

Not only is the action believably human (in a truly unbelievable way, obviously), and fallible – it’s also funny. There’s a terrific extended chase sequence with Hunt running across the London skyline – along the tops of buildings, through offices and sliding down tiled roofs – while Benji, directing him left right, left right, in his pursuit from the ground, doesn’t realise he’s up in the air. It’s only when Ethan pauses and Benji questions it – presumably he thought Ethan was waiting for a pelican crossing to turn green – and Ethan barks he’s waiting to jump out of a window, that he twigs.

The plot, as far as I could understand before it got too muddy, centres on some missing containers of plutonium, which Hunt previously failed to rescue after choosing the lives of his team instead (and if that’s not on the next philosophy A’Level paper in a discussion of rule utilitarianism then it should be). This idea that Hunt feels himself forced to continue his work because he can is a big theme here and as near as it gets to real thoughtfulness; not so much arrogance as the belief that he’s personally letting down individuals and the world if chooses a quiet life.

And despite its many threads, director Christopher McQuarrie has ensured you don’t have to have seen the series to enjoy this one. There’s quite a lot of explanation, even if I didn’t always understand it all. The unremitting action needs no prior knowledge; and the warm relationships among his team, while they may have been built up during previous films, are easy to appreciate and enjoy.

The plutonium search takes in first the White Widow (Vanessa Kirby) a fake philanthropist and genuine arms dealer; if Hunt can spring imprisoned American agent turned anarchist Solomon Lane (Sean Harris), who is about to be transported across Paris in a prison van, he can then swap him for the plutonium via her contacts. (Or not swap him, as of course he and Lane have History; but get the plutonium back anyway.)

Oh and Hunt is pretending to be John Lark, another terrorist, and later he’s framed to make the CIA think he really is Lark, gone rogue. Isla Faust is in Paris too, just to add to the merry reunions.

Keeping an eye on Hunt for the CIA is August Walker (Henry Cavill, perfectly cast!). He spends the first half of the film always slightly behind Hunt and the second half slightly in front. He’s ruthless, and extremely snarky (I’ve just checked my cinema notes and I actually wrote “Walker is a cocky bugger” so you can rest assured that was my first impression). He’s funny and fit during that already-famous restroom fight scene between him, Hunt and He Who May Or May Not Be Lark (Liang Yang), as sparkly glass shatters, silver pipes are ripped from walls and the pristine shiny-white cubicles become drenched in blood.

There’s a puppyish keenness too. “Hope is not a strategy” Walker says pompously, to which Ilsa replies dryly “you must be new”. (A feature of Fallout is how much of the action is not just seat-of-pants, but made-on-the-hoof, as planning goes out of the window and instinct and ever-reducing options take precedence.)

I’m not going to lie, I rather liked Lane (until I discovered he’d gassed whole villages and shot down a passenger plane to kill one person), almost as much as I liked moustachioed Walker in “Victorian gentleman about to challenge one to a duel” mode.

Even though the mad-eyed Lane has terrible things planned for us, because “the greater the suffering the greater the peace”. (I do love movie villains with Big Ideas and Big Speeches to match. I know I moan about long films, but don’t cut them if doing so means chopping their narcissistic, impassioned world annihilation-justifying gibberish. Eventually even the most megalomaniacal of them mentions the compromised nature of most governments and I start thinking “Hmm, a stopped clock is right twice a day!”).

The terrible things include two nuclear weapons linked together which can only be deffused (wait for it…) once the countdown has started, and which are hidden in a medical outpost at the base of a huge and rocky glacier in Kashmir, by a water source which supplies some of the most populous nations on Earth.

And someone has gone off in a helicopter with the detonator which needs to be switched off, but luckily there’s another helicopter just taking off too, and a black-clad hero in pursuit.

[NB – I know some of you visit this site for spoilers on the big blockbusters – when I supply them I give you appropriate warnings. This has a plot so convoluted it’s hard to spoiler in the actual review without using a trillion words, but look away now if you don’t want to know anything: Ilsa is in Paris to kill Lane for MI6 (though he survives the movie, ending up in custody again). Hunley (Alec Baldwin) is killed. August Walker is also John Lark, in cahoots with Lane. Walker has ensured that Hunt’s ex-wife Julia is working as a doctor at a vaccination post in Kashmir, where the bombs are hidden. It’s Lark / Walker who Hunt is pursuing in the brilliantly exciting helicopter chase at the end (Walker dies, though it takes some doing). You’ll also be delighted to know the nuclear bombs are defused with literally one second to spare and the world is saved! Happy viewing…]