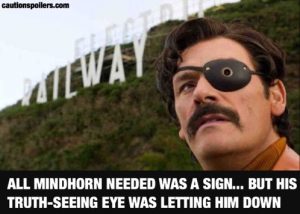 2017 has been full of films about family but sadly Mindhorn isn’t really an advert for the enduring bonds of blood and friendship – his TV “family” seem to have got used to his absence after he popped out to the shops and never returned all those years ago, and aren’t overjoyed to see him back; and his potentially long-lost child is desperate not to be his.

Richard Thorncroft (Julian Barratt) is a washed up actor whose glory days are far behind him. His heyday was playing Bruce P Mindhorn, a biologically enhanced TV detective whose eye could *literally* see the truth. (And I really hope it could as I’m an editor and hearing literally misused can *literally* make me want to commit crimes.)

In the quarter of a century since his TV show ended, Thorncroft has been chewed up and spat out by Hollywood, minus all his self-respect and most of his hair – and is now reduced to living in a flat in Walthamstow with only a Mindhorn doll, a 90 piece Mindhorn jigsaw and all the other Mindhorn merchandise that unsurprisingly never sold.

With no work on the horizon (Bergerac actor John Nettles keeps taking his jobs) – and reflecting the old proverb that it’s an ill wind that blows nobody any good – a suspected killer on the loose on the Isle of Man offers Thorncroft a chance of redemption and possibly a return to the public eye.

The alleged killer, who styles himself The Kestrel, is convinced Mindhorn is a real detective and tells police that he will only speak to the man himself. So Thorncroft heads back to his old stomping ground, to help the investigation and in the process deal with the demons from his own past.

Ex-girlfriend Pat (The Babadook’s Essie Davis), who used to play his love interest on the show, is now a serious journalist and living with Thorncroft’s old stunt double Parnavik (Simon Farnaby, who co-wrote the script with Barratt), who wanders his impressive gardens in tiny denim shorts, and on seeing Thorncroft spends the whole time drawing attention to his old colleague’s large gut. But most galling of all – for a man who almost certainly lives by Gore Vidal’s famous comment that “every time a friend succeeds something inside me dies” –  his old co-star Peter Eastman (Steve Coogan), has a spin off TV series, Windjammer, which is now in its 16th season. And of course no one on the island has forgotten or forgiven Thorncroft’s insult-filled drunken appearance on Wogan many years before.

There is a plot, one that is it is certainly less complex than Mindhorn’s 90-piece jigsaw. But it’s not about that, it’s about the jokes, which come thick and fast and (mostly) hit the spot. When waiting to speak to the suspect on the phone, Thorncroft leaves it ringing and ringing and ringing because “Mindhorn would make them wait” as he states confidently to DC Baines (Andrea Riseborough), before picking up the receiver and finding The Kestrel has rung off. And the dialogue can be both sparkling and soul-destroying at the same time: “My mum loved it!” says a young policeman to Thorncroft, when he is asked about Mindhorn. “Is she single?” asks Thorncroft, still convinced he can leverage past fame for love, or at least lust. “She’s dead” replies the copper.

Like lots of British comedies the humour is rather uneven, though this movie is considerably funnier and tighter than many of the BritComs I’ve sat or snoozed through over the years. It’s clearly destined for cult and cosplay status as it is so quotable and also Mindhorn never seems to change his outfit of orangey-tan polo neck and matching leather jacket. But while most of the actors don’t resort to hamminess, the last third of the film is a bit too manic and extreme.

Though the cast is A+, some of the characters lurch into caricature. Ex-stuntman Parnavik is completely over the top and some of his plot-device actions are unbelievable. But while seeing The Kestrel (the wonderful Russell Tovey) lurch towards them squawking and flapping his pretend wings, would probably leave any potential murder victims dying of laughter before he could kill them himself, his story is movingly portrayed.

Thorncroft himself reminds me of both Alan Partridge and David Brent, British failures whose lack of talent prevents any long term success and whose vanity and fear mean they can’t understand why that is. All three characters can be super-annoying but they also bring an element of pathos to funny films that still manage to rather touchingly shed light on lives badly lived, opportunities wasted, and life lessons remained resolutely unlearned.

Thorncroft is nothing if not irrepressible – “the Benedict Cumberbatch backlash has begun!” he announces – and he has a bumptiousness that is surely armour against all the evidence that he is not and never was cool or popular. At times it is uncomfortable watching, as we’re laughing with him and at him.

Like the original TV show, Mindhorn the movie is resolutely parochial in its scope and its references. John Nettles (who played Bergerac), Wogan, it’s all very British and very small scale. And as a fellow middle-aged Brit whose glory days (what there were of them anyway) are in the past, I really felt for Thorncroft, the man behind the TV show. Plus we both drink our coffee the same way (I’ll have an Americano with hot milk please).

By the way don’t assume that after the five at the end of Guardians of the Galaxy vol 2, the film world’s allocation of post-credits scenes has been used up. There is one here too which you will not want to miss.