You are here: Home / Film Reviews / Mickey And The Bear 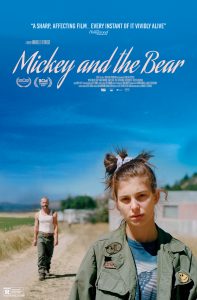 Hank, a veteran of the Iraq War, now spend his days looking for ways to dull the pain of PTSD and his painkiller addiction. His daughter Mickey, nearly 18, looks after him, their parent-child relationship turned on its head in too many ways.

A coming-of-age drama about trying to escape when others are trying to pull you back in, this is an incredibly assured and sensitive film from first-time feature director (and writer) Annabelle Attanasio.

And while it covers well-trodden ground, the performances, and Attanasio’s refusal to make supporting characters simply one-note chess pieces in Mickey’s story, gives Mickey And The Bear a definite edge.

Mickey’s self-created strengths means the movie is hopeful even at its bleakest, yet it never loses sight of how much of society has abandoned damaged people like Hank. Both are complex individuals, tangled together in a mess of co-dependency, fear, manipulation and love. It’s Mickey’s increasingly obvious attempts to find a path out through the mess, and Hank’s terror at the prospect of losing her, that drives their story.

They live in a run-down trailer just outside the town of Anaconda, in Montana – Mickey’s mum Vanessa is dead, and it’s telling that we don’t learn anything concrete about her for a long time; when we do it’s from a stranger. Hank (James Badge Dale) hates talking about her, yet her memory persists, confusing him further about what is now and what was then.

Mickey (Camila Morrone) searches for tangible remnants of her mother; she wears Vanessa’s floral dress on her own birthday, a change from the baggy sweatshirts, baggy t-shirts and baggy jeans she wears the rest of the time. Later, breaking into an office in a desperate attempt to help Hank, she’s distracted by the perfume she finds in a drawer, the exact scent her mum wore.

Mickey saves money from her part-time job in a taxidermy shop, and manages their home life and her dad’s medication. Hank veers between angry, listless and friendly, partly because he can’t cope with life and partly because he’s trying to clumsily manipulate her into staying. We get glimpses of the crowd-pleasing Old Hank, but increasingly the jokes are either designed to put her down or help him hide his failures from himself. Plus being able to hold the attention of the room depends in part on the admiration of your audience, and not many people admire Hank any more.

About to turn 18, Mickey has two potential ways out of her current life. Settle down with her boyfriend Aron (Ben Rosenfield), another frightened, drowning man who wants to stay in the town, get married and have a family; or escape to college.

Friends push her this way and that; her best friend at school is already pregnant, fears about telling her Christian parents outweighed by her delight at being able to settle instantly into the life she wants. Then a new boy in town, Londoner Wyatt (Calvin Demba), shows Mickey that there could be a route to a bigger world – a talented musician, he’s heading off after high school graduation to the Conservatory in San Francisco.

Wyatt is more like Mickey than she realises at first, and not just that he turns out to be sort of local, his mum having been born in the state. Their similarities give her hope and also have the potential to drive a wedge between them. She probably gives their burgeoning friendship more weight because of what he represents than who he really is. Her escape is self-protection and eventually his reaction is the same.

He’s also the biggest threat Hank has seen in years. Tiny incidents, which previously would have drifted away unremarked before melting into nothing, like snow when the ground isn’t yet cold enough, now begin to build as the reality that Mickey can leave hits home. A bear hunt with Hank, Mickey and Wyatt is the last ditch attempt by Hank to reassert his authority on his own territory.

Attanasio holds back from gifting Mickey a mother figure (as a director she turns away from triteness at every stage). A psychiatrist, Leslee Watkins (Rebecca Henderson), is probably the best person to get through to Mickey; battle-hardened after years working in underfunded mental health services trying to help people who probably won’t get better, she’s unsentimental and doesn’t try to be a saviour. Their scenes together are really strong, the guarded Mickey and the doctor who wants to help her because for once it might actually make a difference.

Mickey And The Bear boasts an exemplary cast, and Morrone and Dale are simply superb; their relationship, too close in some ways and too distant in others, is perfectly judged in every scene.

Her face is beautiful and open, with constant hints of what lies beneath that perceived openness. Dale’s portrayal of Hank invites both anger, pity and guilt; Morrone’s portrayal of a girl forced to be an adult when she should have had the space to be an annoying, stroppy teen, is heartbreaking.

The town and the space around it are more than a jaded backdrop to the unfolding drama. Anaconda, nestling beneath the mountains, feels hemmed in. Once night falls it almost has a retro aesthetic, garish pink and green light spilling out onto the pavement as Hank stumbles from its bars. The countryside around about is beautiful, filled with lakes and trees.

While most people are wrapped up in their own lives – Hank is probably unsavable, Mickey just more collateral damage – it still feels like nature is watching her, waiting for her decision, from the grasses in the fields to the animals in the taxidermy shop, staring unblinkingly ahead.

Find out about the (ambiguous!) ending below…

On the hunting trip Hank punches Wyatt, who walks home wanting nothing more to do with them. Mickey tries to take the money out of her savings account, set up with her mum’s social security cheques; she discovers Hank has taken all the money. She goes to see Dr Watkins who admits to her that Hank will never recover; Mickey meanwhile tells her that the money would, with the scholarship she’s been awarded, have paid for college. Dr Watkins encourages her to go anyway, but Mickey says she can’t.

Hank is hurt after a night in town drinking. She takes him home and next night he thinks she’s his late wife and tries to kiss her – Mickey, angry and frightened, pushes him away. After that as it moves to Hank asleep in bed, and Mickey leaving – though we don’t know if she’s leaving for good, or where she’s going. She runs away down the road, faster and faster, and then the film stops.