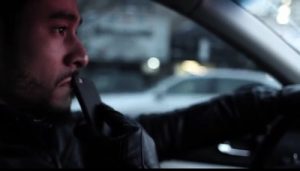 Sometimes, keeping your friends close and your enemies closer may not be up to you.

You know how I love to start a review with a pithy quote from the film? That’s a bit tricky with short film Message Received as there is almost no spoken dialogue in it (literally about two words). But somehow that really works and it’s certainly not a quiet film, with its soundtrack of background noise working overtime to develop a real sense of menace.

Message Received, a short film from New York based Broken Box Inc, is only 11 minutes, but that’s long enough for a decent story arc and for us to build up a vested interest in the main character, particularly impressive as he’s not actually very nice.

Made for less than $100 over four days with no additional crew – and with a script written in a day – Message Received won the Best Director prize for Stephen Herman at the 2017 CUNY Film Festival, a short films showcase and competition for current and past students from the schools that make up the City University of New York.

David Chin plays James, a young married man who has a secret (possibly more than one if some of my exes are anything to go by, but that’s my problem and this is only 11 minutes long) that he’s hiding from his wife. And now he’s being blackmailed by someone who is threatening to tell her what he’s been up to.

Lured away from his home to meet the blackmailer, and complete on a deal to to have the evidence returned, things start to go very wrong.

A few things really grabbed me about Message Received. It looks very professional, especially for a film made so quickly and on such a minuscule budget. David Chin is terrific as the husband – his rising stress levels are evident as the minutes tick by but he holds back and never lets his portrayal of the errant husband trip over into melodrama. The warehouse location in particular works really well – there’s a definite feeling of isolation and vulnerability as James arrives, compounded by the enjoyment his tormentor seems to be deriving from their exchanges.

I did work out what was likely to happen but plenty of films follow a familiar story. I also wasn’t sure I’d pay up for some pictures which could be copied anyway (unless I looked really awful in them in which case here, have all my worldly goods). But Chin is very believable as his already bad situation gets even worse.

You can view Message Received below.