You are here: Home / Film Reviews / Louder Than Bombs 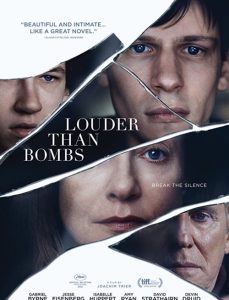 I’ve met a few men like Jonah. First telling his wife not to swear in front of their just-delivered baby daughter in case she hears, later sleeping with an ex he has accidentally left with the impression that his wife has cancer. Jonah doesn’t have a problem misdirecting people, accidentally or deliberately, to create a narrative he wants.

I know that sounds like I’m dissing him but I’m not (well maybe a bit – he seems to become less likeable but more vulnerable the more we get to know him, with his sometimes brittle joking, or trying to persuade his younger brother not to take a risk for love). But he’s dealing with emotions that he can only really cope with by suppressing them.

Families’ reactions to life events big and small often follow the same trajectory. And I’m still not sure, watching films like this, whether I’m looking for insight or just confirmation that other people are worse at relationships than me.

Louder than Bombs is about truth and the avoidance of it. The mother is dead but she features frequently: in flashbacks, dreams, drawings and conversations with and about her.

This is Joachim Trier’s first English language film. Isabelle (Isabelle Huppert) is a photographer, often away in war zones, who dies in much more prosaic circumstances – a car crash near her home. It’s three years on now, and her husband Gene (Gabriel Byrne) is tentatively dating a fellow teacher at their younger son Conrad’s high school, while their eldest son Jonah is married with a new baby daughter named after his mum.

Then a colleague of Isabelle’s, Richard, informs Gene that he’s going to write a wide-ranging article for the New York Times about her, including that she actually killed herself in that crash. Richard doesn’t ask if he could or should, he just tells Gene that he will. Which, when it’s about a woman who busted boundaries and searched of truth, tackling those crucial questions about how much a photographer should be involved or be a bystander, how much she should affect the outcome or simply record it, is entirely appropriate. A photographer shouldn’t  sanitise war and likewise shouldn’t have their own story sanitised.

But for the people left behind with only memories and mementos, controlling her portrait is key, whether done deliberately or unconsciously. Jonah curates her life and their recollections of her, changing the story of someone who was scrupulous in ensuring her photos told the truth. He takes it on himself to go through his mother’s pictures, to ensure nothing falls into what he considers the wrong hands: “Mom was so protective of her stuff, we wouldn’t know what we would be giving them” and it’s all happy-sad until he finds pictures indicating she was having an affair. And he won’t return home to his wife and baby, lying to his wife about where he is and what he is doing – first sleeping with his ex-girlfriend, then hiding under the covers of his childhood bed.

Conrad is a typical struggling teen: avoiding talking to his dad, playing video games in his room, crushing on Melanie, a girl at school, and writing strange things. He wonders about setting fire to a female classmate’s hair. The most times he’s jerked off in one day. And just how long do bodies take to decompose?

And anyway Gene still won’t tell Conrad the truth about his mother’s death even thought Conrad clearly knows he hasn’t been told the whole story.

Dreams surround Isabelle. Conrad fantasises about his mother and her death, imagining her falling asleep at the wheel, glass shattering around her. At one point in a flashback Isabelle herself talks to her husband about a dream she had where she was on location and was raped in the street, while Gene just sat in the car watching and smoking.

Isabelle questioned herself constantly about her responsibilities to her subjects and their lives, but her family seem to always be in avoidance mode. “I’m faced with this every time. Can I take a photo that tells their story? The way they would if they could tell it? And is that my job? Or shouldn’t I instead use this family to tell something bigger and in some ways more important, at the risk of reducing them to an example, to victims?” she says. You could argue that she’s hiding herself behind those pictures but I don’t think she is. If anything she seems to be working hard to ensure it’s not she who is front of stage.

Huppert’s face is nakedly revealing. Her job has long been a mixture of matter-of-factness and expression, and her face conveys that in extraordinary ways. Byrne is craggy and stoic, and Gene actually comes across as rather weak, avoiding the difficult issues. Both are beautiful with lines of worry and grief and simple age, and the camera lingers, focussed fiercely on their faces.

It’s an interesting film, though a very insular one, as characters try to bring a traveller home.

As is often the case the troubled teen turns out to be the most sorted of all of them, the one most likely to be able to cope long-term. Devin’s performance as Conrad is eye-opening in its teenage mix of clear-sightedness combined with the anger and frustration that has no real outlet, plus of course a massive dose of teenage hormones. Conrad’s is a silent scream (most of the time), as he hasn’t got many outlets available to him.

But he does have an ability to live in the present and derive his victories from that. His grin when he leaves an envelope of his writings on Melanie’s doorstep is wonderfully triumphant, as the act of leaving it is what is important to him, not her reaction. Later she agrees to meet him for lunch and he enjoys the moment knowing she will change her mind.

Gene does seem to understand that he’s let down his sons, perhaps treating Jonah more as an equal when losing your mother at any age can send anyone careering back to childhood.

But more than that they finally realise that they all remember her as a slightly different person, and not just because of what they have withheld from each other, albeit with the best of intentions. Most of us tend to assume that our memories are the “real” ones and this family is no different: experiences and recollections with and about her when she was home, and how they coped when she was away.