You are here: Home / Film Reviews / The Lost City of Z 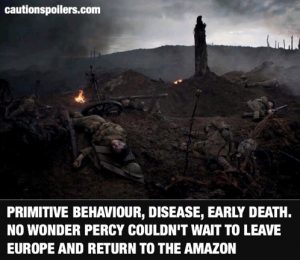 “This search for Z – I can no longer bear the cost” explains an emotionally weary Henry Costin, Percy Fawcett’s long time travelling companion on hearing news of Fawcett’s latest exploratory trip. Because by then, after 20 years of travels, for Fawcett no cost is too high.

James Gray’s film is beautiful, stately, but overlong; its themes of obsession and escape from the West’s own barbarism – particularly WW1 – playing out against an epic backdrop.

Click here for the Lost City Of Z video review

Percy Fawcett was a real life explorer who, in the film, is sent by London’s Royal Geographical Society at the turn of the 20th century to Bolivia, ostensibly to map part of the terrain but with the hope that in so doing the British can help prevent war between Brazil and Bolivia, who are squabbling over borders.

Fawcett (Charlie Hunnam, impressively all-consumed) is an Army Major with further movement up the ranks alluding him, apparently due to some unacceptable behaviour of his forefathers (“He’s been rather unfortunate in his choice of ancestors” warns one old fogey about him after Fawcett has felled a stag with a perfect shot and a bigwig wants to invite him to dinner).

Despite the area being full of “terrible diseases, murderous savages” Percy agrees to go even though it means months if not years away from his wife Nina and small son Jack.

It is some days into the sea voyage to Bolivia that Fawcett finally meets Henry Costin (a very good and unrecognisably bearded Robert Pattinson), a man who starts off an unreliable drunk but becomes Fawcett’s closest travelling companion and confidant over the years.

The Amazon is effectively run by rubber plantation owners, and Fawcett is told on his first venture, when enquiring of a British official, “Government sir? I’m afraid you left government behind a long time ago”. Nonetheless businessmen want peace as war is disruptive, so after being provided with an Indian slave and some provisions the group starts to travel up river, hoping to find its source.

Fighting off arrow attacks and worse en route, Fawcett is then staggered to find what he believes is evidence of a lost city, with pottery and intricate carvings. They have to return home but the rest of the film follows his attempts to return interspersed with intrusions from the rest of the world (family life, seeing action in the first world war).

The Lost City of Z is good but it is long – too long in fact. It’s 2 hours 20 minutes and actually feels even longer. (That “Oooh!” sound I made at the end was partly in recognition of its quality and partly me trying to get out of my cinema seat after atrophy had set in.) The problem is there is no huge set piece for the film to build up to. The film is not uneven – it maintains its pace, but that pace is stately, with the passage of time illustrated by his ever growing family (he seems to be presented with a new child each time he arrives home) and his increasingly salt and pepper hair.

Visually The Lost City of Z is stunning, from the boat sailing slowly up the river to the locals’ villages (cannibalism scenes included). And the difference between Percy at home in starched collars and uniform, with Nina in intricate lace confections and decorated hats, is in marked contrast to the grubby sweaty messes Percy and his companions become when travelling. But I’d be lying if I said I hadn’t been enjoying the cinematography while simultaneously wishing they’d hurry up a bit and maybe talk faster.

The film is very male, but then so is the story, and its era. Men exploring, men having meetings of varying levels of frostiness or friendliness in mahogany panelled rooms back at the Royal Geographic Society, public meetings to discuss Percy’s findings where the main area is men-only. The only female character of note is Percy’s wife Nina (Sienna Miller, who is very good and reminded me of Geta Scacchi). She’s loving but frustrated, both at society and – eventually – at her husband as it becomes clear that in their equal marriage one is more equal than the other (“please try to be reasonable” he says, echoing men down the centuries as their wives dare ask for more). To be fair in the film Fawcett becomes more forward thinking about the communities he meets in South America, having started from a more progressive base than most men of the time.

Hunnam is excellent as Percy, and he completely embodies the man’s growing obsession over the decades; Fawcett as a character is both complex and frustrating to watch. Though after the traumas of the Front in WW1 it is no surprise that the Amazon – with its tribes following centuries-old traditions that place such importance on community and wisdom – feels to Percy like a haven, an escape from the barbarity of his supposedly civilised nation.

The Lost city of z is available on vod, blu-ray and dvd from amazon.com

the lost city of z is available on vod, blu-ray and dvd from amazon uk

Watch the trailer for The Lost City Of Z: