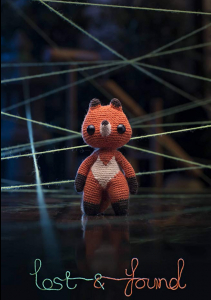 Of course I’m not crying, I’ve just stabbed myself in the eye with a crochet hook.

But you may be more emotional than me, in which case I would recommend you find something to dab your eyes with (not wool, you know how that gets when it’s wet) before watching the gorgeous, witty and heartbreaking Oscar-shortlisted short film Lost & Found. (See it in full at the bottom of the page, along with a behind the scenes video.)

I think back to the number of times I’ve mentioned in a review about a plan unravelling, and it’s never been more true than in Lost & Found, as a green knitted dinosaur and an orange knitted fox are forced to face the greatest challenges of their lives.

This is a little slice of filmmaking perfection. And yet director Andrew Goldsmith and writer-director Bradley Slabe have done it by taking classic blockbuster love story tropes – love, danger, and self-sacrifice – stripping them down into seven minutes, and producing a story that will tug at your heartstrings as hard as a nail pulls back Dinosaur from his rescue attempt, when Fox falls into a water barrel.

Fox is playing on the edge of a water feature in the garden, throwing pebbles into the depths, when the constantly refilling water chute suddenly tips her in.

Wool, stuffing, water, and a big dose of shock means she can’t climb back out, weighted down as she desperately tries to scramble upwards.

Dinoasaur’s rescue attempt is almost instantly hampered though, as he catches himself on a sticking-out nail. Every step he takes towards rescuing his beloved now takes him one step nearer to his own demise, his progress marked by a string of ever-lengthening green wool as he struggles to reach her.

(See how I’ve assumed Fox is a girl and Dinosaur a boy. That’s Hollywood love story conditioning for you. It can’t even be the colour, Gamora is green in the Avengers.)

The story is sad but uplifting, funny yet brutal; their motivations believable and realistic, emotions dancing across their snuggly faces.

It’s beautiful to look at too, from the dark night sky to the contrasting orange and green animals, their waffle-like texture against the smooth pebbles in the water barrel and the coarse balls of white stuffing that soon litter the floor.

I love how traditional movie metaphors are made real – blowing kisses to each other that literally hit them with such force, Dinosaur falls over; then desperate plans unravelling.

Cuddly toys are a clever idea in a film about unwavering, eternal love. How many 30 year olds have a tatty stuffed toy in the corner of their bedroom, hidden from new partners until they finally admit that PandaPanda is a permanent fixture? As new parents we read notices stuck in shop windows, or posts on forums, about lost toys – placed by a desperate mother whose child is inconsolable. “I’ll buy two” we tell ourselves so if it ever happens to us we can instantly bring out its too clean, un-chewed replacement, which rather misses the point of what they mean to us.

If there’s one thing Lost & Found – one of the best films I’ve seen in a long time – highlights is that if you love someone and they love you, neither of you is replaceable.

That, and learn to knit. You never know when you’ll need to.

Watch the behind the scenes video (preferably after you’ve watched the film, not before!):