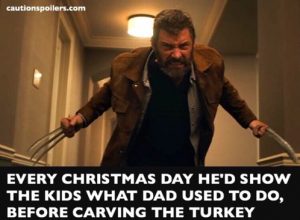 Logan isn’t really about superheroes. It’s about ageing and its accompanying vulnerabilities and failing bodies; the fear of death masked as obstinacy and intransigence; about what makes a family, and how families pull you back in whether you want them to or not; about the loss of the old and sacrifice for the young, and also of finally feeling able to let go.

The year is 2029 and no mutant has been born in a generation. Logan (Hugh Jackman) is working as a per-trip chauffeur, mentally exhausted and physically scarred as he sits behind the wheel in his suit, while giggling girls on bachelorette parties flash their breasts at him from the back seat.

90 year old Charles Xavier (Patrick Stewart) is also fading – “you’re waiting for me to die” he tells Logan – his body so weak he has to be carried and his extraordinary brain now prone to producing terrible pulses that leave people nearby suspended in agony. Charles is living in a giant container with a single bedstead in the centre and a few plants scattered around to make it homely, while Logan visits with drugs he’s procured that can suppress the pulses, and albino mutant Caliban brings his meals.

Caliban (Stephen Merchant), who can track other mutants when there are actually any to track, now tackles the domestic chores – his grey face, vast height and fear of the sun making him look like a butler from the Addams Family. The three of them are a little unit, living in an abandoned smelting plant in the desert near the Mexican border.

The effects of age are ever present, with Logan, and even Charles in his more lucid moments, well aware that time dwindles in tandem with their seeping-away powers. Logan’s healing abilities are slowing so while his body still recovers from stabbing and bullets, it is now marked with scars that map his descent into old age.

But even beyond fading superpowers he also needs reading glasses. Charles requires help going to the toilet and with washing and dressing. Many times Logan simply picks him up and carries him, the type of scene that is replicated everywhere when the child becomes father of the man.

The land is tired and dusty, the people are broken or hedonistic, and the world itself seems to be simply limping along. But Caliban isn’t the only one who can track down a mutant and people start to find Logan, having heard that someone who looks like Wolverine is in town. Despite trying to rebuff them with much metaphorical claw-bearing, soon Logan is unwillingly pulled back into a world of conflict and violence after he’s approached by a nurse desperate to get her young charge, 11 year old Laura, to safety.

Laura (Dafne Keen), also known as X-23, has been created from X-Men DNA along with other mutant children at research facility Transigen under the auspices of Zander Rice (a rather orange and oily Richard E Grant). But soon, as mutant technology rapidly advances, she and the others are of no further use to their creator. She needs to get to a place called Eden near the Canadian border, where she and the other children can be safe. Logan, though, is initially determined not to get involved.

Under attack at their hideaway after being tracked there by Donald Pierce (Boyd Holbrook) and his bunch of Reavers, Logan takes Charles and leaves the young girl – though before they can get away she emerges nonchalantly from one of the buildings to launch a ferocious attack on the Reavers. Not only has she got hand claws she’s got foot claws too, perfect weapons for a small child as she jumps and rolls and cartwheels through the black-clad cyborgs.

The film is a road trip, interspersed with scenes of incredible violence, as they head towards an Eden that almost certainly doesn’t exist but which can almost certainly be created, in a circularity that only children with their black and white belief in what they are told can ever achieve.

Charles, in pointing out that Laura’s reliance on Eden’s existence is reason enough to take the trip, turns out to be right after all.

The film isn’t depressing as such, more worldweary, and there are flashes of humour particularly from Caliban. At the start of the film Logan wants nothing more than to live out his days on a Sunseeker yacht, safe on the seas. Obviously this is not much of an option for albino Caliban who asks if his role would be to hide “below decks like Nosferatu, folding your underpants and making him spotted dick”.

There are good meta moments when Logan reads Laura’s X-Men comics and blusters in annoyance over the stories – where writers, like tabloid reporters, have taken a tiny snippet of truth and built a world of lies and excess around it.

But Logan isn’t lighthearted or for the fainthearted. It is super-violent (heads literally roll, claws enter then instantly exit bodies in frenzied scenes that make Freddy Kruger and his glove look positively restrained) though the violence seems appropriate to me.

The theme of family is everywhere. Charles, Logan and Caliban, all of them damaged, but still supporting each other while bickering in the way of families who know they can never be fully separated. The group of mutant children, and their nurse who risks her life to send them to safety and can’t bear to see even one of them left behind. Even Zander Rice is a father figure of sorts to his enhanced mutants-as-weapons, distant but delighted as mutant X-24, his pride and joy, only responds to the doctor’s pleas. And of course Logan, Charles and Laura – father, son and daughter as he describes their unit to a family they meet and help on their journey.

Logan and Laura’s relationship is complex – Father Of The Year he is not, and despite Charles’s pleas to “go back for the girl” after she joins them, he initially simply leaves her. He’s unwilling to get involved, and even once they are travelling together her silence makes it hard for them to establish a relationship. She and Logan are so similar but maybe it’s the caregivers at Transigen, who against all orders (“think of them as things with patents and copyrights” they are admonished) tried to provide some semblance of childhood with names and birthday parties who initially gave her back some humanity, something he could make a connection with beyond claws. Maybe he’s just enjoying the fruits of other women’s hard work as he’s gifted a final chance by Laura?

Like many families, the young and the old find most common ground, and it is with her ostensible grandfather figure Charles that Laura develops the easiest bond. With Charles she is also still a child – in one scene she happily whizzes around a bedroom in his wheelchair.

Dafne Keen in her first film role does an incredible job as the quiet, watchful, yet potentially super-violent Laura who has never been given a moral compass but still somehow manages to fashion something approximating that. Greying, wrinkled old Logan works so well as an aching and crumbling ex-superhero that it’s a surprise when X-24 appears showing us what a younger, fitter, Hugh Jackman looked like.

Patrick Stewart is perfect as the frail old man always needing assistance, but like most older people hating having to ask for and receive it. Richard E Grant is suitably unpleasant with that dryly British sense of humour appearing at moments of great peril.

And while this is ostensibly about a few outsiders, America is also cocooning itself. The family they meet en route are facing down a corporation which wants to oust them from their home, a corporation taking over farm after farm to grow corn syrup, the new opiate for the people – as the father says wearily “it used to be when a bad day was just a bad day”.

Logan the man may be creaky, Charles losing his mind and Caliban a latter day Mrs Mop, but the film itself is anything but tired and broken. Paradoxically Logan has new life breathed into him as he discovers what it is to be a father, even if it’s a role he hasn’t chosen and mostly doesn’t want. Charles continually pushes Logan towards Laura, urging him to go back for her, as if he knows – like any patriarch aware that his own story is almost at an end – that there must be continuity of the line. This is their chance to make sense of their lives that isn’t just about remembrance of superheroes past.