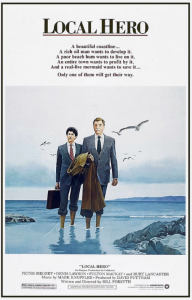 A Scottish fishing village. An American oil company. Bullied locals vs thoughtless big business. Local Hero looks as if it’s going to be a story about heavy-handed billionaires forcing idiosyncratic Northern villagers in chunky sweaters out of their birthright.

Or it probably did in 1983, when it came out. Now the film has become part of British cinematic DNA, and if you’re over 40 you’ll probably have a decent idea of what it’s about, and how it by turns inverts expectations and works with them.

American oilman Felix Happer (Burt Lancaster, great fun) is quite nice actually, and only really wants to be an astronomer. And the Scottish residents of the fishing village in Ferness Bay are delighted at the idea of being paid millions to leave their hardworking lives behind, when Happer’s oil company offers to buy the village so they can build an oil refinery there.

There’s so much to do to keep Ferness going that the “you had one job!” joke would only work until about 11am. Gordon Urquhart (a hilariously determined Denis Lawson) is typical: village hotelier, village accountant, and on occasion village taxi driver; he’s also tasked with negotiating with the Americans on behalf of the villagers.

Gordon is determined to get them a great deal and enjoy the negotiations, demanding his opposite number Mac MacIntyre at least pretend to haggle over the huge sums. “He’s got a bag full off money so stay calm and let me handle it!” he implores from the pulpit of the local church to the congregation of locals, many of whom want to take the largesse offered rather than hold back and wait for a better offer.

Mac (Peter Riegert) works for Happer’s company, Knox Oil & Gas, in Houston, but is sent over to negotiate the deal because everyone assumes he’s Scottish, even though in reality his parents picked the name when they arrived from Hungary because they thought it sounded American.

Despite repeated reassurances to everyone else and eventually himself that he is in fact “a Telex man” who could sort this whole deal from Houston, once in Ferness Bay Mac succumbs to its charms – befriending the villagers, falling for Gordon’s beautiful wife Stella (Jennifer Black) and studying the stars in the clear night sky so he can phone his findings through to Happer.

He’s assisted by the gauche Danny Oldsen (a hilarious Peter Capaldi), Knox’s representative in Scotland; his collection of MacIntyre from the airport Arrivals hall, asking the laden and weary traveller “can I give you a wee hand” before taking only Mac’s mac, sets the tone.

Scotland looks even more gorgeous than usual. It’s sparklingly clean, from the shortbread-coloured sand to the glass-like rock pool water. Evening skies are shades of blue and pink, candyfloss colours layered like a geological diagram. Daylight scenes have none of that chilly dourness you can get with Northern vistas (I can say that as I’m Northern, and indeed am often a chilly dour vista myself).

Ferness is a straight-talking sort of place and yet it is gently bathed in low-key weirdness. Director Bill Forsyth deliberately leaves some questions unanswered.

The two women are named Marina and Stella, in a film about the sea and the sky. (The only problem with watching Local Hero in 2019 and as a parent was finding myself humming “the sea the sky the sea the sky”, a song performed by Grampy Rabbit in Peppa Pig, over and over.)

And is Marina (Jenny Seagrove, with a Scottish accent that ebbs and flows like the tide), a scientist at Knox’s nearby facility, actually a mermaid? She drops enough hints to the lovestruck Danny, who falls for her at first sight; later she appears in a sea-blue satin dress that brings to mind shimmering scales.

Who is the father of the cute toddler in a bobble hat, who is always being wheeled around the village by a group of men? When asked by Mac who the dad is, they look at each other nonplussed. Forsyth leaves it up to us to decide whether no one is sure so they’ve decided to share baby duties, or whether it’s cheery Russian fishing boat captain and regular visitor Victor (Christopher Rozycki), dropped off on the quayside in a motor dinghy by a very angry woman.

The down-to-earth wit and magical realism in Ferness contrasts with the wacky comedy back in Houston, where Happer’s therapist continues to live up to the “crazy psychoanalyst-obsessed Americans!” trope so common in the 80s. His job, even after Happer has fired him, appears to be making Happer feel as bad about himself as possible, even appearing outside Happer’s office windows to paper them with insults.

Meanwhile a terrible crime has, finally, been committed in Ferness: “Is that my rabbit?” asks Mac, presented with the animal simmered in white wine for lunch by the multi-talented Stella, having left his new pet, a rabbit they accidentally hit and stunned with Danny’s car en route to he village, upstairs in his bedroom. Gordon’s reasoning for cooking it is straightforward: no pets are allowed in the rooms.

The only other real drama is when they discover that the beachcomber Ben (Fulton Mackay) actually owns the whole shoreline, a gift from the Lord of the Isles several hundred years ago. He doesn’t want to sell, but in a story where characters often have a near-matching counterpart (Mac asks Gordon if he can stay in Ferness with Stella, suggesting Gordon take over his life in Houston) Ben and Happer, when they meet, get on like a house on fire.

Forsyth utilises tropes and turns them on their head from start to finish. The dreaminess may be designed to hark back to Brigadoon, the film about a Scottish village that only appears once a century. Yet Ferness certainly isn’t the stuck in a timewarp. When Ben offers him a tasty-looking orange from a washed-up consignment, Gordon’s response is resolutely 1980s: “Shit, it’s South African”, he mutters.

Buy local hero on blu-ray or dvd from amazon uk

buy the blu-ray or dvd from amazon.com

Watch the trailer for Local Hero: