You are here: Home / Film Reviews / Live By Night 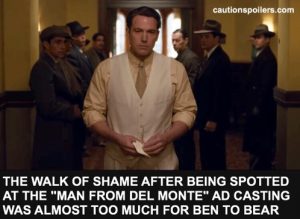 To say Live By Night drags is an understatement. Which is a real shame as so many of the ingredients needed to make an entertaining, sumptuous, exciting and romantic film are there, or almost there – they just seem to have been lost in a turgid morass as lots of men in hats drive around in old cars debating gambling laws, and gangsters go round shooting and bombing people to the evident surprise of opposing gangsters who  presumably could just shoot and bomb the shooting and bombing gangsters and the film could end a lot earlier.

Live By Night really is a film of two halves. It starts in Boston with Affleck’s character, Joe Coughlin, an Irish American with a police captain for a father, back from the war (“I left a soldier and came home an outlaw” as no one else said, ever), settling into a life of crime aided and abetted by close friend Dion while having a long term affair with Emma (Sienna Miller), an irish moll and girlfriend of Boston’s Irish gang boss Albert White (Brendan Gleeson).

Emma is painfully aware that other people look down on her because of her poor, rough background and she attacks in kind, with foul-mouthed responses that give no ground to the assumption that women should be nice and pleasing. Prickly and brittle, she does seem to have found some kind of temporary soulmate in Joe. (She also spends all her time either wearing gorgeous flapper dresses and smoking, or, during their sex scenes, wearing stockings and a giant bedspread and smoking. Joe for some reason manages to keep his clothes on for sex throughout the film.)

White is in permanent battle with Maso Pescatore (Remo Girone) Boston’s mafia boss. It’s the era of Prohibition and the two men are fighting over the rum trade in the city. Eventually Joe decides to do one last bank job but it goes badly wrong.

After three years in prison Joe is out and working for Pescatore, sent down to Tampa in Florida to manage the rum trade there, taking Dion with him. Which he does, very successfully, also falling in love with Cuban Graciela Corrales, who works in the rum business with her brother. White also has a rival team in the state, and though Joe takes them out he then has to deal with the KKK, who may be “inbred with a 4th grade education”  but who have everyone from working men to judges in their pockets.

Meanwhile innocent young Loretta, the daughter of the Tampa head of police (a man so beholden to cognitive dissonance he allows numerous warring factions to set up on his turf yet considers himself incorruptible) heads to Hollywood and a film career which goes horribly wrong. Returning home, and faced with her father’s rage and shame, she becomes a preacher – turning local people against Joe and the gambling establishment he is planning as Prohibition looks to be coming to an end.

Affleck seems to be on autopilot in this, and it looks as if he’s spreading himself too thin writing, directing, producing and starring in Live By Night with so many other projects on the go. He is very solid in his truly enormous suit, and when he rouses himself he is very funny. But a lot of the time, particularly in the second half of the film, he simply lacks charisma, and the pace of the film is too slow to draw him along with it. He looks like his mind is elsewhere (presumably debating with himself whether to direct The Batman or not). His character seems to flipflop between lovely kind family man Joe and shoot ’em up unsympathetic gangster, and it doesn’t really feel like he’s having any kind of internal debate within himself about what he wants to be.

Zoe Saldana as Graciela is wonderful – intelligent, elegant, and a full and equal partner in their relationship despite the racism of the time. (She also deserves a much better ending than she got.)

Elle Fanning is excellent as Loretta, who has seen terrible things and who despite redefining herself as an all-white wearing bride of the Lord still retains the quick wit, hustle and self-preservation instinct she needed in LA. (There’s a lovely scene where Joe is trying to persuade Loretta to stop criticising the proposed casino and they’re talking about sin, and within a couple of sentences the conversation has somehow turned to “people laying down with beasts” and neither of them is really sure how – but they’re clearly enjoying the verbal sparring even though neither seems to believe what they’re saying). I also liked Sienna Miller’s performance as Emma, a woman who has closed herself off so much to protect herself she now can’t let anyone in.

The film looks fabulous, with a stark contrast between the gritty Boston streets and its gangland life, and the hot and dreamy lifestyle down in Florida. The outfits are sublime, the speakeasies are a riot, and the script, when it’s not meandering along like the slowest-moving bayou, is sharp and snappy (Affleck wrote the screenplay and to his credit he didn’t keep absolutely all the best lines for himself) but there are only so many 1920s gangland shootings I can take. The ending is just a massive cliche though, and really does the character of Graciela a huge disservice.