You are here: Home / Film Reviews / Light Between Oceans 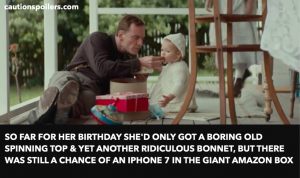 Guilt. That’s what they could have called Light Between Oceans, though it wouldn’t have conveyed the light-drenched sunrises that the gorgeous cinematography scatters through this film. And I was already feeling guilty at hardly having reviewed any Fassbender films despite him being officially trademarked as one of the Best Actors of his Generation. I have been rectifying this lately, with this and with Shame, another Fassbender film about guilt. In Shame, Fassbender spends the time mostly naked, but in Light Between Oceans his outfits – trousers, shirt, tie and jacket, even when there is no one for hundreds of miles – are one more indicator of his enclosed, stoic uptightness.

I’m going to say straight off that I really enjoyed The Light Between Oceans. A lot of films nowadays are too long. Light Between Oceans is 135 minutes, but it never seems overlong. Rather it develops its own speed (admittedly slow and stately) and gradually, relentlessly, guides you to the story’s increasingly inevitable guilt-induced final section.

Fassbender is terrific as Tom Sherbourne, a man overcome with, yes, guilt at surviving the first world war when so many others – including his future wife’s two brothers – did not. He is offered a lighthouse keeper’s job at Janus Rock, a tiny island off Western Australia. Usually they only send family men, but Tom admits he seeks the solitude Janus would offer. Before he leaves he meets Isabel, the sparky daughter of a local couple. He heads to Janus alone but Isabel’s letters encourage him to marry her and he’s soon returning to Janus from the mainland with his new bride.

Isabel seems to be trying to bring order to her life now that her family has been torn apart, but once on Janus it becomes apparent that some things are not controllable. Over the space of two years she loses two babies well into her pregnancies and unsurprisingly she and Tom are left heartbroken.

So when – two days after she loses her second child – a small dinghy washes up on the rocks containing a dead man and a well-wrapped up, crying baby girl, it’s not surprising that in her desolate state, on their desolate island far from more reasoned voices, Isabel demands that they keep her and raise her as their own.

Unwilling at first (rules are rules and everything that happens has to be noted down in the diary for his employers) Tom soon complies, and they even construct scenarios between themselves that assume the baby is an orphan though there was no sign of a mother in the boat. They bring up the renamed Lucy on Janus as their own for several years, despite Tom finding out about the still-alive mother well before that. Then while trying to put right – at least a little bit – what they’ve done he manages to simultaneously make the real mother’s life worse and jeopardise their own.

Tom’s guilt at surviving the war colours everything, and drives the last third of the film when he seems determined to punish himself for something that wasn’t his idea in the first place. He’s protecting his wife but also pushing for what he sees as the inevitable conclusion. He isn’t a rule breaker. Indeed his father’s treatment of him meant that the rules of trench life were not arduous for him. But he breaks the law and transgresses our notions of morality when he agrees with Isabel to keep someone else’s baby, to protect his wife from her grief. Then he does so again when he has been arrested, to protect her from the consequences of her decision.

Alicia Vikander is fabulous as Isabel. She seems so young and at times he is almost a father figure, but actually she is the driving force behind everything they do. From their first date (when she announces as a fait accompli at the lunch table that he has asked her on a picnic, even though he has done no such thing), to their marriage, to the doomed decision to keep the baby, she forces through all the decisions. Baby Grace’s father was German and believed that you only have to forgive once, as resentment takes too much work. Grace’s mother Hannah (a very good Rachel Weisz) attempts to act as her husband would have done towards the end of the film. But sometimes people need to know that they have done wrong and it’s not clear Isabel ever truly believes she has.

The film certainly asks a lot of pertinent questions, possibly too many. And at the end I was slightly overwhelmed by them. Questions about loss and about family, and who belongs in a family. And whether those relationships still exist when people are gone (early in the film Isabel asks is she still a sister now her brothers are dead? Later on we wonder if her parents are still grandparents now their “grandchild” has been taken from them). Are Tom and Iz still Lucy’s parents in any way? In the last third, the script repeats key themes in a rather sledgehammerish way, when the lead actors are easily good enough convey those feelings.

The cinematography is sumptuous and the storms that batter the lighthouse terrifying. It shows how tight a family unit they are that they create an idyllic existence on what is essentially a windswept bit of rock sticking out of the sea.

The very end of the film had me sobbing into my tissues, I’ll admit. I do love a proper resolution to a film (probably one of the reasons I don’t really enjoy many horror films – as you know that the surviving blood-soaked heroine will either die in the opening scenes of the sequel or will have to go through the whole thing again). Light Between Oceans certainly has that though I can see why it might promote those accusations of melodrama.

For me it was a fitting ending though, especially when an hour earlier I’d been wondering if anyone could come out of the whole unhappy situation with any sense of contentment and acceptance.