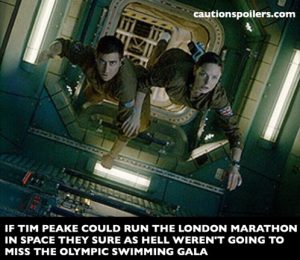 When it comes to single-cell organisms that can lie dormant for what seems like hundreds of years before being reanimated with some sugar and then causing complete havoc, I’m something of an expert – but they were at school today so I thought I’d go and watch Life instead.

With the action taking place on the International Space Station, there are six crew members and for the first time in years none of them is Matt Damon. Two Brits (biologist Hugh Derry, and quarantine officer Dr Miranda North), two Americans (medical officer Dr David Jordan and ISS pilot Rory Adams), Japanese system engineer Sho Murakami, and Russian ISS commander Katerina Golovkina make up the team, thrown together but also friends, as they gear up to deal with one of the most important discoveries mankind has tackled.

Click here for the Life one minute video review

A probe is bringing a soil sample back to the space station from Mars – a sample that includes a single celled lifeform. Initially Hugh, stuck in his little lab with the rest of the crew outside, their noses practically pressed to the window, manages to reanimate and grow the organism with glucose. It rapidly develops from a tiny microscopic entity to a piece of damp tissue to a dancing beansprout, to one of those really ugly, veiny grey houseplants that rich people give each other as they can’t think of anything else to buy.

The lifeform is named Calvin by schoolchildren back on Earth which at least stops us calling it an alien with its memories of, well, Alien. Naturally Calvin isn’t happy remaining petri-dish bound, and, still growing, he manages to escape (seriously, surely it’s possible to build a secure lab to house an unknown and possibly hostile lifeform that is actually secure with no “oh my god what about that hole it might escape out of” moments?). In fact he keeps growing fast even after his ugly houseplant incarnation, and while I’m not going to spoiler to for you, suffice to say as he develops you’ll probably identify different bits of existing aliens within him and also you probably won’t want to eat calamari for a while.

The rest of the film is all about trying to find and kill Calvin before he finds and kills them. There are lots of chases which are basically zero-gravity races through tunnels trying to dodge deceased crew members, still hanging where they died, like climbers who have perished on dangerous mountainsides and been left where they fell, for reasons of practicality but also acting as a warning.

There are some nice touches. Some crew members have more invested in the potential of Calvin to help humanity – as Hugh (Ariyon Bakare), who back on Earth is disabled, says to Miranda (Rebecca Ferguson), what if Calvin could “cure the incurable, reverse the irreversible?” And there is a pleasing twist on the “smuggling the alien home to weaponise it” trope. We also see things from Calvin’s point of view (don’t worry, it’s not all about how misunderstood he is). There aren’t many comic moments unless you are American and enjoy telling us Brits how stinky we are (we are “an under-bathed nation” according to Ryan Reynolds’ pilot Rory, and apparently everyone knows it), though I did like that finally a Marigold rubber glove got a starring role in a movie. Those things are massively under-appreciated and it’s about time they got their double-strength moment in the limelight.

The performances are excellent and I was also genuinely invested in who would survive, and how. The friendships between the crew members are really very well-drawn considering how quickly the action has to get going. There appears to be genuine affection between the crew, and while all of them are still breathing they seem to have pretty much equal screen time which makes a change. I liked that both Hugh and David (Jake Gyllenhaal) are happier in space than on earth, and their reasons. I also really warmed to Sho (Hiroyuki Sanada), the Japanese engineer. He watches his baby’s birth via his iPad and that provides one of the few links with the outside world.

The main problem with Life is the lack of tension, although to be fair that does improve towards the end. Despite the familiar premise, a space station should – with its functional decor, limited space and hostile external environment – be the perfect claustrophobic setting. There are only six people and one lab mouse, being picked off one by one by a creature whose limits and capabilities are initially unknown then change as fast as the crew learn about him, but there just isn’t that sense of menace or dread.

What there is, is a real sense that we have seen all of this before, and the set pieces all seem (methods of death excluded) very familiar. On a space station there are only so many ways you can try to kill an alien and you just know there’s going to be a scene with people clinging on for dear life to a random ladder while a malevolent creature tries not to be blown out of an airlock.

Ah yes, the deaths. They are inventive and if they’ve been done before they’re certainly not common sci fi tropes. With only six crew members and Daisy the mouse (she’s not really called Daisy, I just like my John Wick references) every death has to count, you can’t just blow a couple up. It is also impossible to predict the order of death which makes a refreshing change, and helps create what tension there is.

Weirdly, the ending is both “argh!” and “yeah”. I saw it coming a light-year off and I am usually the one left going “er what happened there?” at the end of any film more complex that Mary Poppins.

I do like a punning or ironic film title though so in that sense Life is perfect, though it does mean we get some rather portentous comments such as “Calvin doesn’t hate us but he has to kill us in order to survive” which is the most accurate if the most boring elevator pitch for a sci fi movie I’ve ever heard, and “life requires destruction!” (yes! cries every woman when looking at themselves naked in the mirror after having a baby).

Ever since first hearing about Life I’ve wondered how they could have originally pitched it without mentioning Alien. The initial premise has already been done, brilliantly, and when watching this I kept waiting for some big reveal that would prove the Alien similarities had just been the producers winding us up. But it never comes. The main difference seems to be to show that we are set in the present, hence the well-trailed “cue Instagram!” shout, and echoes with history – “tell the Committee the pilgrims have landed on Plymouth Rock” says Katerina (Olga Dihovichnaya) in a dispatch, when the probe and its precious cargo are finally retrieved.

Life isn’t a bad movie. It’s actually quite good overall and the performances from all six cast members are terrific. The problem is the derivative nature of the story (it always seems like they were thinking “how can we make this Not-Alien” rather than starting with an original take on the premise) and the lack of tension. Life is something of a missed opportunity, a situation that at my age I try to avoid.