You are here: Home / Film Reviews / Life And The Art Of Lying (Short Film) 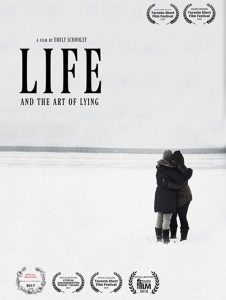 “Fuck you Charlie, fuck you!” screams Mara, a young woman finally able to admit her feelings for Charlie, but who has just been blindsided by a huge secret Charlie has been keeping from her.

Our first sympathies are always with Charlie of course, who has found out her cancer has turned, an illness she has spent three years lying about to family and friends.

Finally admitting that she had cancer and now has it again, she is determined to manage her own treatment and if necessary her own death; but because she hasn’t told anyone she was ill none of her friends are able to give her the unconditional support she needs and is asking for.

It’s a shocking dilemma. Who wouldn’t want to support someone whose chances of survival are slim, with conventional medicine offering only a few more months paid for by chemotherapy and invasive surgery?

But Charlie (Angela Martin) decides to follow non-conventional treatments, which also may not work, while Mara (Ariana Leask) may have to watch the women she’s fallen in love with die.

It’s easy to look at Mara and her raging – a previously straight woman who may well have seen her initial flirtations with Charlie as something cool and fun, but is now truly in love and faced with losing her friend – and see selfishness, and they do have a conversation about that.

But if there’s one time you can be as selfish as you like it’s when you are seriously ill. (And women are so often expected to put other people before themselves that I now see selfishness as something to be applauded.)

Charlie’s doctor (Kelly-Marie Murtha) becomes a more visible and important presence as the film moves forward (it’s about 26 minutes long). She moves from someone empathic but well used to presenting bad news to an active participant in Charlie’s decision to move away from the clinical white walls and scrubs of the hospital where we first see them together.

Writer-director Emily Schooley shows great conviction in handling her themes, which though they seem small scale are actually anything but: love, health, selfishness vs selflessness, queer relationships, truth. But all of these feed into one overriding theme, that of taking control where you can. Without some semblance of control we’re all floundering, in situations major and minor.

Charlie has already taken what control she could by keeping quiet about her illness first time around, while she had to leave treatments to the professionals and outcomes to science and luck. 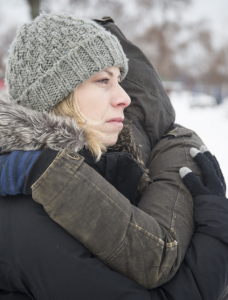 Angela Martin’s performance as Charlie is really impressive – particularly that first time we see her Doctor Simone’s consulting room, as the young woman tries to joke her way out of her death sentence: “I thought everyone beat cancer these days. It’s like Botox, everyone gets it, right?”

The doctor’s responses are concerned but reflexive, said a thousand times before: Charlie doesn’t need to make a decision about ongoing treatment right now, her calm voice retreating into muffled sounds as Charlie’s brain struggles to process the news.

Late, Charlie’s conversations and arguments with Mara are entirely believable as Charlie tries to keep to her chosen path and Mara flails and rages at the woman who has had the temerity not to fit into Mara’s Happy Ever After.

This is a well-made film, with believable performances and realistic settings. The new year’s eve party in the slightly scruffy flat, walls decorated with stuck-on glittery stars, the rooms filled with twenty-somethings drinking alcohol out of paper cups, is well done (indie films often simply don’t have enough extras to fill the background of a scene, but this looked very realistic).

And I loved the scene where both women, casually dressed, sit facing each other on an old grey sofa, enlivened only by two brightly coloured stripy cushions which looked like they’re referencing the Pride flag.

The twist ending didn’t seem as believable as the rest of the film, or really necessary at such a late point in proceedings. It introduces an element of conspiracy theory thriller, an extra theme which is hard to reconcile with the main story in a film of this length; and actually Charlie and Mara’s struggles with what life has thrown at them are enough on their own.

(I don’t know if Schooley is planning on turning this into a feature, but it’s a strand which could be more fully realised and integrated into a longer running time.)

But overall Life And The Art Of Lying is a well-directed, beautifully shot film with two sterling central performances from Martin and Leask; a story about women in love that is both moving and wittily told.

Check out the trailer for Life And The Art Of Lying below:

Life and the Art of Lying (2017) – Trailer – HD from Laughing Cat Productions on Vimeo.