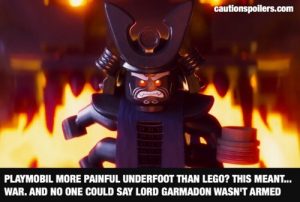 Ninjago is an island city, which evidently has its own TV station – make that several TV stations, as the version we see here in the UK has Lego Kate Garraway and Lego Ben Shephard, the real life hosts of Good Morning Britain, hosting Good Morning Ninjago. As far as I know there’s an American version with American breakfast hosts immortalised in Lego too, though where that leaves those posh kids who watch BBC Breakfast to find out the latest stock market results I have no idea.

The city of Ninjago is regularly attacked by arch villain Lord Garmadon (Justin Theroux), an absent father but ever-present force for evil.

His son Lloyd (Dave Franco) lives in Ninjago with his hardworking single mom Koko (Olivia Munn). All of Ninjago knows who Lloyd’s father is, and yes they make him suffer for it. On the school bus in the morning everyone rushes across the aisle to one side to avoid him, though at least it means Lloyd always gets a seat.

Garmadon is shrouded in black with a huge black headress and four arms, extra limbs which are frankly wasted on him and should be given to Koko who is probably doing four things at once as I type.

Lloyd does have a few friends, and between them they make up a group of secret teenage Ninjas, who protect Ninjago from Garmadon. At school they may be unpopular, but once they jump into those school lockers and disappear down to the basement where their ninja vehicles are waiting, they are all that stands between Ninjago and Lord Armageddon, I mean Garmadon.

All the teenage ninjas are named after elements: Nya, the only girl, is Water; her brother Kai is Fire; Cole is Earth; Zane is Ice; and Jay is Lightning. Oh, and Lloyd, who is, er, Green. Lloyd is pretty upset by this, and can’t understand why he can’t be the element Wind, or at a pinch “the Element of Surprise”.

Then there’s Master Wu (Jackie Chan), Lord Garmadon’s brother and Lloyd’s uncle, who instructs the teens in the ways of the ninja and helps them defeat Lord Garmadon on a regular basis.

Master Wu is adamant the youngsters must harness their own power to beat the evil Lord (“the strongest weapon is inside you” he opines), though Wu also insists on keeping his own Ultimate Weapon, which seems a bit of a cheat. And he’s not always a force for helpfulness, with the ninjas having to take time out to “decode your needlessly cryptic metaphors”.

Garmadon is a terrible dad. He knows about Lloyd, though doesn’t bother to keep in touch, except accidentally on Lloyd’s birthday when he accidentally butt-phones his only son. And so oblivious is he to accusations of bad parenting that his response to Lloyd’s complaints is “how can I have ruined your life, I wasn’t even there!” But initially he has no idea that Lloyd is also his constant opponent, the Green Ninja.

It’s not surprising that it’s taking several attempts for Garmadon to actually take over Ninjago, as he’s as rubbish a leader as a father. He regularly fires his generals (by fires, he literally fires them out of a fiery volcano).

But successfully invade he eventually does, leaving Lloyd no choice but to fire the Ultimate Weapon at his dad, an action which enrages his ninja colleagues and attracts the attention of a real, non-Lego, tabby cat who proceeds to terrify the locals and knock over various tower blocks.

Now the young ninjas have two villains to fight: the cat-monster and Garmadon. But to oust them the ninjas need to go on a long journey to find the Ultimate Ultimate Weapon, through forests and canyons to the Temple of Fragile Foundations, which appears to be the structural equivalent of that old saying about listening when men tell you what they really are.

And of course like all the best journeys, it’s also going to be a journey to enlightenment, although they don’t know that yet.

Lloyd and his dad do manage to establish a kind of relationship, and eventually Garmadon can do something as personal as clip Lloyd’s arm back in when it pops out. In fact I can attest that the limb snaps back into position far quicker than in real life Lego, and infinitely more easily than sodding Playmobil.

This a good-natured and very funny film that rarely flags, and the scattergun approach to humour means any less amusing asides are quickly passed over. Many gags are, in the Lego movie tradition, culturally knowing – meeting Nya, the only girl Ninja, we are asked by the voiceover “can she really have it all?”

My favourite joke is oft-repeated, but is never not funny, as Garmagon insists on calling his son L-Loyd as the name starts with a double L. My children (8 and 5) were mystified at my constant cackling over this, as they can’t spell Lloyd. (Well they couldn’t this morning. They can now!)

The real cat didn’t really do it for me, despite it being rather brilliantly name Meowthra – too much like breaking the fourth Lego brick wall. I know this happens in a lot of Lego movies but it just seemed a bit too eager to drag us out of the Lego world we have, rather uncomfortably, ensconced ourselves in.

There are also some fabulously witty flashback scenes showing how Garmadon met Lloyd’s mum Koko, a warrior from the opposite side who locks eyes with him across a crowded, limb-strewn battlefield. But love is love, and as such can conquer all, even a horrible villain who wants to take over the world. For a while, anyway: “I told your mother I wanted to build our life on the ashes of that fine city” he tells Lloyd, explaining how he, Koko and baby Lloyd first set eyes on Ninjago.

There is a slight sense of diminishing returns here, and it’s not as bright, nor the humour as sophisticated, as in the other Lego movies. Some of the animation is a bit ropey, with Lloyd owning the world’s worst-drawn goldfish.

But in general it is great fun and it has a terrific cast – perfect half-term holiday fare. My children and I were all chortling throughout, sometimes even at the same jokes.