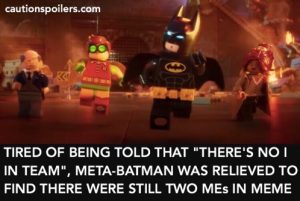 Honestly, this film has so many bad guys in it, I was surprised I didn’t spot any of my exes.

And fittingly, as it is a truth universally acknowledged that Britain produces the BEST bad guys, our scariest inmates are in the movie too – including He-Who-Must-Not-Be-Named (no, not Simon Cowell Man), and They-Who-Can-Now-Climb-Stairs (if you’re not sure about that one, ask your Doctor). So many bad guys (and girls) you are sure to miss some of them. In fact there are nearly as many bad guys as jokes and as with the bad guys you’ll probably miss some of the gags too, as there are just so many of them, for adults and for children.

This movie doesn’t just throw the jokes out at us, it also laughs at Batman (Will Arnett) and his previous film portrayals as well. Lego Batman is self-obsessed, humourless, brooding and vain. He’s a loner who thinks that means all superheroes are loners, when actually they just don’t really want to spend time with him – in fact the Justice League happily parties together after accidentally forgetting to invite him. He also doesn’t want a family, or so he says. He spends his Bruce Wayne down-time mesmerised by the microwave before eating Lobster Thermidore alone, in his dressing gown, with his painted-on abs on show, brooding over his frenemies. It’s obvious that being Batman massively validates him.

Fittingly for a film about a toy that inspires in equal measure love (it keeps the littler horrors quiet for hours) and loathing (I’d put money on most children first hearing the F word when a parent steps on the little bricks in the dark in bare feet) the main relationship in Batman Lego Movie is also a love/hate one, where neither can exist without the other. Sadly only arch-or-is-he-enemy The Joker (Zach Galifianakis) really gets this. Brighter than Batman, and less self-obsessed, he understands that he and Batman are linked together forever, and one cannot exist without the other – like two men holding on to a rope in a never ending game of Tug o’ War, the equal strength on each end keeping it taut and unmovable.

And like an annoyingly needy boyfriend or girlfriend desperate to hear those three little words, the green-haired villain is obsessed with getting Batman to admit that of all his enemies in all the world he hates The Joker most of all.

Only unfortunately Batman, to The Joker’s devastation, refuses to agree, instead admitting his greater loathing for one of his superhero pals. So jealous is Batman of this particular superstar that one scene where Other Superhero appears on a TV show which Batman is watching at home brings to mind Gore Vidal’s famous quip that “every time a friend succeeds, I die a little”. (Batman and The Joker’s inverted version of “tell me that you love me” is very funny – at one point The Joker says “listen Batman, I hate you”, to which Batman can only bring himself to say “Me too”.)

The Joker and Batman are a weird kind of family despite Batman’s insistence that he doesn’t want one. He does though manage to accidentally acquire an adopted son in Robin (Michael Cera), whose introduction into Bruce Wayne’s and eventually Batman’s life is a perfect lesson in what happens when you don’t listen to children but just walk along doing your own thing saying “um um yes um” to whatever they come out with (I have done this a lot myself, and in my time have ended up agreeing to a birthday party in summer with real snow, and a puppy).

Batman has supposedly been keeping Gotham safe for years but has he really? Batman, Gotham and crime seem to be intertwined like Miss Marple, an English village and murder, with all three kept in a weird kind of balance. (There is also an extra-legal prison in the sky called the Phantom Zone where many of the world’s mega-criminals have been banished to, including The Wicked Witch of The West and the Daleks). As the new Police Commissioner, Barbara Gordon (Rosario Dawson), points out at her inauguration, Gotham is STILL the mostly crime-ridden city in the world despite (because of?) Batman, and she wants to clean it up.

To this end she begins her task, eventually managing to get the loner superhero to work in a team along with her, Alfred Pennyworth (Ralph Fiennes), and Robin, against The Joker, and yes despite the Bat’s initial insistence that every success or good idea is down to him, they do eventually click together as a team of four, just like, well, like Lego.

This is probably the most referential film ever made. From the endless superheroes and superbaddies from all over the world and almost every conceivable child-friendly sci fi universe, to Alfred’s listing of all the years Batman has previously been through an introspective depressed phase (basically every time a new Batman movie came out).

Batman Lego Movie is a U certificate in the UK and my 7 year old absolutely adored it ( I love going to screenings full of children, no one can erupt at a fart joke like a demure-looking 4 year old in pigtails, they eat and burp constantly, and no one minds if they talk loudly about what’s happening and how funny it is. They are basically a small version of the audience at Shakespeare’s Globe Theatre in the 16th Century). The biggest laughs from children in our audience came where Robin, and later Batman, lost their trousers, and when The Joker explains that he is going to take out Gotham City, which is apparently build on thin plates over an abyss that smells like used underwear.

One word of warning (okay, several words but one point). We saw Batman Lego Movie in 3D and the actual print of the film seemed quite blurry in parts. I tried on my son’s 3D glasses to see if I had accidentally brought his spy kit spectacles with me by mistake, but no. Apparently it’s something to do with the 3D aspect being added in post-production rather than it being filmed in 3D. I am not an expert though, and I don’t know whether all prints will be like this.

Lego Batman Movie is brilliant though, for adults and children alike – and had me at, not hello, but the first minute where we are reminded that “all important movies start with a black screen”.