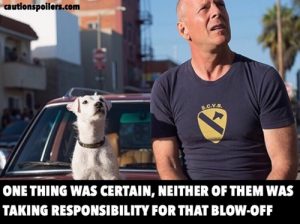 When I read the brief blurb for LA Vengeance – LA as in Los Angeles, not La Vengeance which sounds like a murderous, bodice-ripping French opera that I would definitely watch – my heart soared. A hard-ass detective’s beloved dog is stolen by gangsters and he’ll go to any lengths to get the pet pooch back.

It sounds like a flashy, trashy B-movie John Wick rip-off, but with more sunshine and more jokes. And a dog that doesn’t die! (We hope.)

Sadly it was not to be. LA Vengeance has a mostly impressive cast (John Goodman, Famke Janssen, Jason Momoa) but they are also mostly wasted, and the movie itself never knows what it really wants to be.

Steve Ford (Bruce Willis) is “Venice’s only licensed detective”, and this is Venice, California we’re talking about. (The movie’s original title was Once Upon A Time In Venice and I’m assuming they changed it after disgruntled arthouse patrons discovered the film wasn’t a love story about a Renaissance painter and his bordello-raised girlfriend, but instead presented them with a naked Bruce Willis, a gun hidden in his butt).

Steve is a “a self-appointed figurehead in the community”, subjecting local kids at the skatepark to long monologues about not letting their lives go to waste. John (Thomas Middleditch), who provides a voiceover throughout that is by turns annoying and mildly witty, is completely unlike his business partner. John is nervy, and looks like a mid-20s grad student with his wayward curls and his jumpers, the opposite of the muscly and bald Steve.

John takes Nola to Steve, and luckily she and Steve get on really well and the two of them are soon shagging like crazy, all thoughts of Sex Addicts Anonymous gone from her mind. That doesn’t meet with her brothers’ approval though, and it’s not long before Steve is jumping out of his bedroom window to escape.

Found by a friendly policeman, the law officer speaks for most women watching Hollywood movies staring George Clooney, Brad Pitt and Tom Cruise when he points out “You’re an old man! Why don’t you meet someone your own age and make a life for chrissakes?”

Then there’s some skateboarding around the city, naked, before Steve steals a friend’s stolen car back from a drug dealer called Spyder (Jason Momoa, almost unrecognisable with a huge handlebar moustache and bandana). Spyder is *the* big drug dealer in Venice, and he’s not happy with Steve either.

Steve’s dog Buddy often stays with his sister Katey (Famke Janssen), and suspiciously soon after Steve’s run-in with Spyder her house is burgled, and Buddy is taken. (Buddy is extraordinarily well trained, and is probably Method, too.)

Steve will do anything to save Buddy, but Spyder makes him do a job first. The detective will get the dog back only if he tracks down Spyder’s drugs haul, which has been stolen. (I think. At this point I rather lost track of who was doing what and looking for whom, so if you watch this movie and think “that’s not at all what she said would happen” I can only apologise.)

There’s also a subplot where Lew the Jew (look, I don’t make up these names), a friend of Steve’s, is finding explicit graffiti on the side of his apartment building. The pictures – of Lew having sex in various positions – have a lot of artistic merit but are stopping him selling to some Chinese investors, so Lou asks Steve to find the artist. Then as a thank you he will sell Steve the detective’s parents’ old apartment.

John Goodman also pops up as Steve’s best friend and surf shop owner Dave. The actor is his usual lugubrious self, and once again adds a sheen of laid back class to the production, even though I’m not sure why he was there.

LA Vengeance is a wasted chance. It isn’t funny enough and crazy enough, when it could be a joyous B-movie caper, and terrific actors are underused. Even the dog doesn’t make an appearance for ages.

There are quite a few gags that we would now term problematic or, you know, offensive and not funny: Lew the Jew but it’s ok as that’s what he calls himself; the graffiti artist Salvatore (Tyga) turning out to be black; how to pronounce Nola’s Samoan name; and a “so that’s how it feels” comment when Steve has a gun clenched between his buttocks.

Willis is amiable enough, and his scenes with Goodman are good, though he doesn’t make as much of the thin script as he should. Janssen as his sister is barely in it, which is a shame as the relationship between the siblings, of which we only get glimpses, could have shaped up to be really interesting. Momoa hardly appears.

Luckily, the soundtrack is thoroughly engaging – breezy, summery, and giving a great sense of place.

But think how much better this would be if it was indeed about a slightly substandard assassin forced to do jobs for gangsters to get his dog back: with Steve subject to a Barker Marker, a Bloodhound Oath that can never be ignored, and if he does the dog will chew his shoes and wee in his spider plant.

Sadly LA Vengeance, a movie that could have been derivative but still an enjoyably witty, if batshit riot, is derivative but simply not funny enough. I’m afraid Buddy deserved better (and I’m a cat person).

buy / rent Once upon a Time in Venice on amazon video from amazon.com

buy Once Upon a Time in Venice on dvd or Blu-ray from amazon.com