You are here: Home / Film Reviews / King Of Crime 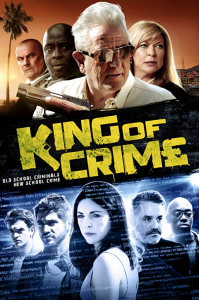 King Of Crime starts off pretty well. It’s got the British gangster flick trademarks we all recognise, from the big house to the London-accented ageing crime boss to the blonde wife and feuding kids.

Plus violence – early on and shockingly abrupt, as if to warn us that this isn’t going to be a “salt of the earth and he loves his mum”-type crime film.

Crime boss Marcus King (The Bill‘s Mark Wingett) lives in leafy Oxfordshire in a huge house with a sweeping drive, a sweeping staircase and lots of expensive overstuffed furniture.

His wife Yvonne (Claire King, who played Kim Tate in Emmerdale) is as tough as him: steely, glamorous, and prone to shagging the hot gardener when she hears about yet another affair her husband has been indulging in.

She’s so menacing that when she declares that tea should always be poured before adding the milk, I resolved to drink it that way myself from now on, despite decades of declaring “milk first”.

Marcus has moved with the times away from general protection rackets (though he still does a few of those too, locally) into cyber crime: phishing, credit card cloning, hacking.

Instead of heavies turning up at every local business once a week for their cut, he’s got rooms full of techies sending out emails to reel in unsuspecting victims. Any pounding the streets is done by employees sent out with bags full of cloned credit cards to syphon off people’s salaries, cashpoint by cashpoint.

He’s working on some new big money schemes too, thought up by his twin sons – planting timed viruses in company networks and demanding ransoms before they start to work.

His sons, Andrew (Jonno Davies) and James (Zed Josef), do a lot of the dirty work for him, from slowly stabbing someone through the hand with a fork to beatings and killings.

“New girl” Jess (Rachel Bright) is busy proving her worth in the family organisation, while also in a relationship with James. She’s got another boyfriend on the go though, Tully (Hainsley Lloyd Bennett), a nice young man and a computer wizard who tries to help her after she is brutally attacked, but doesn’t know what he’s getting himself into.

Marcus is a big fish in England but he’s still a minnow on a world stage – and when Mr Mustaffa (Vas Blackwood), head of a crime group with money links to ISIS appear on the scene, it’s a whole different ballgame. Demanding Marcus hand over his whole empire to them, his only proffered payment to King is the chance to walk away alive.

Marcus of course is always convinced he can out run, out wit or out kill anyone else.

There’s something reassuringly no nonsense about him and his reactions to Mr Mustaffa’s threats, which vary from “fuck off” to “bollocks”.

I liked Claire King as the hard-as-nails wife, a character who has clearly weathered many storms and lived to tell the tale, even if not everybody else does: “Andrew, put that down. What the fuck do you think we pay staff for?” she tells her son, bristling with irritation, when he has the temerity to assist the “new girl” with the disposal of a dead body, wrapped and taped.

Yvonne is hugely resilient, knowing her husband Marcus almost as well as she thinks she does, and it’s only later as the film goes downhill that the actress becomes hobbled by the increasingly ridiculous goings-on.

Rachel Bright as Jess, sorry, “new girl”, is believable as the scrappy, self-reliant new entrant into a frightening world, outwardly phased by nothing while still feeling her way round a family where a comment can be taken a a joke one minute and result in your death another.

Motivations throughout the film are hazy, but Bright makes Jess interesting enough that she’s always watchable.

Unfortunately after a rather bouncy initial 30 minutes, the film does the opposite of run out of steam, and it all goes bonkers. The plot becomes every more convoluted, the violence brutal but without motivation, the dialogue sillier.

King of Crime might have worked quite well as a TV series like Footballers Wives – which started off highlighting a homegrown, almost glamorous world and then got increasingly more bizarre, while every actor continued to play their roles straight.

Here we have ever more unlikely scenarios, minor subplots, motivations and double crossings. But looking back now I’m finding it hard to remember which bits were true and part of the main plot, and which were part of the many elaborate bluffs within that plot.

The ISIS criminals are over the top, literally blowing themselves up to get to the King family. They could just shoot them! The fire effects don’t always work, and the scenes in the hospital don’t look realistic. Some of the acting is ropy.

It’s very violent, unnecessarily so. Actually the initial violence works well in its shock value. But then it becomes exploitative, and you know what’s coming.

Dialling down on the madness in the last hour would have made a big difference; it was hard to keep track of all those reveals, and I have no idea if there were any plot threads left hanging, as it was all so confusing.

It’s not without merit – Claire King and Rachel Bright make the most of what they’re dealt; and the uneven script contains some good, bleakly funny lines. The brothers have a decent dynamic until they tumble into torture territory, and Mark Wingett brings a rather forthright anti-charm to crime boss Marcus King. Ultimately though the film is too derivative and too unfocused.

At the start this looks to have the makings of a slightly off-kilter British crime thriller, with a reassuringly familiar cast. Its main problem though is incoherence – there’s way too much going on, without a guiding hand to see it through.

buy king of crime on dvd from amazon uk

buy / rent king of crime on vod from amazon uk

Watch the King Of Crime trailer: