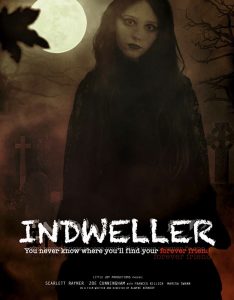 Everyone needs friends, even if just to complain about to other friends. Teenage Emily doesn’t really have any, with a self-sabotaging approach to nascent friendships that come her way.

In Indweller, a short film from writer-director Alwyne Kennedy, Emily may yet find a friend, though this friend is of the type that expects a lot in return.

Emily (a terrific Scarlett Rayner) is moving into a new flat with her mum – a new home in a new town and a new school. Her “so-called dad”, as Emily’s mum Susan calls him, has just remarried and is presumably not a frequent presence in their lives.

Susan (Zoe Cunningham) regularly moves them around from place to place. She reels off the names of previous addresses in her call to some service provider, in between buying paint in cheery colours to brighten up their new flat.

Emily doesn’t know anyone locally yet, though a visit to a graveyard may help (I’d probably suggest this myself – graveyard wandering is one of my favourite hobbies, finding people who died young 100 years ago and feeling sad on their behalf).

I don’t have teenagers yet, but my 9 year old is already well on the way to perfecting that mix of responses that Emily does so well: bored backchat, attention-seeking comments, and justified reactions to an overly critical parent. Scarlett Rayner is wonderful in the role, homing in on how a lonely teen without agency might react; particularly in those moments when Emily stubbornly refuses overtures from acquaintances old and new, to punish them and herself.

Zoe Cunningham too is very good as a mum who’s forgotten that Emily isn’t her friend, or indeed her enemy, but her daughter; a young girl who doesn’t deserve some of the comments she hears from her mum.

The dialogue is impressively realistic. Emily’s conversations with her mum are amusingly brittle; and the emotional gulf between them, even though they are living physically close and only really have each other, is well done. (Susan’s exasperated anger when she thinks Emily has suddenly turned into a goth is both funny and convincing.)

Indweller was filmed in a small flat which limits the kinds of shots available. Initially the close-ups work well, coming in at odd angles and highlighting the unwanted claustrophobia both of their home and their relationship. Over the course of the film it does lose something though, and becomes rather jarring. Luckily Emily does venture out at times, particularly to that graveyard.

Emily’s room feels different to the rest of the flat, though the little things that keep happening are very easily explained and probably wouldn’t even be noticed (Emily doesn’t seem to).

Overall, the film could do with more incidents that signal something untoward or supernatural is happening. Emily seems quite straightforward, if lonely; and while she’s increasingly a lost soul I wasn’t convinced another lost soul would find a way into her psyche (or that her psychological state might lead her to think that). While there is unease, it doesn’t really bloom until the very end. Nor is there enough of the growing connection between Emily and the ghost which means Emily’s choices don’t feel real.

Indweller comes in at 28 minutes, a good length for a tale of the supernatural. Despite my criticisms it’s an enjoyable short; the lead actresses have great chemistry together, and it’s always good to think that all those nights I slept with the light on growing up in a haunted house might well have been justified.