You are here: Home / Film Reviews / In Fabric 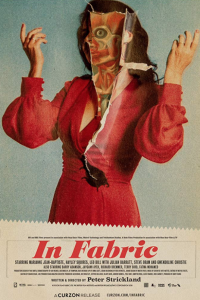 With In Fabric, director Peter Strickland has built a world which conveys all that is best and worst about shopping: carnal, animalistic, beautiful, frightening and blackly funny, with as many touchable moments as teachable ones.

Imagine a cross between 1970s department store sitcom Are You Being Served? and the original Suspiria, and that just about sums up this film.

A haunted dress, bought from a dated fashion store driven by modern consumerism, does its work in deepest, mundane suburbia. Though it brings with it a lushness, richness, and depth of blood-red colour that brings to mind a ’70s Italian horror.

It’s a stunning dress, “artery red” as the catalogue describes it, with a wrap front and long puffed sleeves. And Sheila, its first purchaser if not its first victim, buys into a dream of beauty and confidence that turns into a nightmare she cannot escape.

Like all the best dresses, Sheila’s frock expands to fit people who never thought themselves to be as small as the size on the label – a form of vanity sizing that would make many of us put up with its evil intentions, especially if it was in the sale and had pockets.

The dress itself sometimes slithers along the ground, and sometimes fluttery-glides through the air like a jellyfish in a sea life documentary. At times its malevolence takes on an elegance, sometimes it looks a bit daft, edging jerkily across a bedroom carpet. It makes its presence felt in many ways, sending the washing machine into paroxysms of rage or fear, a scene both terrifying and hilarious.

Presumably we’re in the 1980s, as Sheila (Marianne Jean-Baptiste) has an answerphone, but also still answers her landline with her full phone number. (That actually took me back to the decade faster than the Princess Di-like sleeves on the dress.)

Sheila works in a bank, where the two most obviously comic characters job share as the bosses while also being in a relationship. Stash (Julian Barratt) and Clive (Steve Oram) keep their employees on a tight leash, fake bonhomie barely hiding their contempt for the people who work for them.

Recently divorced, Sheila’s ex-husband is moving on and her son Vince is sexually entwined with the sneery Gwen (a superbly supercilious Gwendoline Christie).

Sheila is lonely, and as this is a pre-Tinder era has to meet people via box numbers in the local paper – which takes an age but at least results in some cracking pictures, from a time when you couldn’t afford to take 50 selfies and choose the best one.

The dress is for Sheila’s first date, with sales assistant Miss Luckmoore (Fatma Mohamed) turning every aspect of the decision-making process into a lengthy and cod-philosophical treatise as the purchase is pushed on its victim. “The dimensions and properties transcend the prisms of our measurements” she spits, which is a long way of saying it’s stretchy.

But haven’t we always elaborated fashion-speak, to make clothes sound important? Beige becomes putty, or biscuit. Shoes and trousers become singular. Incredible properties are given to a pair of pyjamas (sorry, a pyjama!) that you’ll wear to put the bins out. Your life’s worries will be solved if you buy this.

You can see why the assistants want to elevate the conversation around clothes when the elegant garments turn consumers into animals once the price is reduced. The jostling crowd are watched from above as they hop restlessly outside the locked doors, waiting for the first day of the sale.

Miss Luckmoore is, like the best old-fashioned shop assistants, terrifying. She and the other assistants wear short black crinolined dresses and red lipstick, their glossy black hair piled up on their heads. Theirs are impossible looks that are both desirable but also too much, fascinating for what can be achieved but laughable, like cosmetics counter girls who wear every single product on their face at once.

Behind the scenes at the shop it’s a dark and oppressive world, where plastic mannequins are stored and the staff are literally turned on by fashion.

I started my career in retail, managing a Christmas department. So I know the background slog that goes into making the merchandise sparkle, even if the tables on which the baskets of glittery baubles sit are hardboard under the cloths.

In Fabric is so heavily stylised, and sometimes so blatant, I wasn’t always sure if it was mocking consumerism or mocking the people who mock consumerism (I like to do both).

Strickland certainly understands the contrast between the front and back shop aspects of retail, and the wider repercussions of rampant consumerism – and that a trend that can be so damaging is also based on something so artificial.

Signposted comments on fashion as slavery – both the obsession with buying, and the lack of agency of those people making the clothes – still work incredibly well, because they fit so adroitly into this strange world.

The ’80s setting is perfect for this store that seems set in the past yet caters for a newly moneyed clientele, as that was the decade that saw a clash between union-enforced working practices and growing consumerism.

A later owner of the evil dress, washing repair man Reg (Leo Bill), works for a company run on old school lines. Even in the credits, Mannequin Pubic Hair looks like one of those specific titles that union law would require.

This very black comedy is sometimes jaw-dropping and often deliriously entertaining, laying out the dream of beauty sold to us and the ugliness behind. But it’s also vicious, and lacks soul, laughing at this odd situation we’ve got ourselves into without concern for its victims.

Jean-Baptiste is excellent: warm and believable as Sheila, gradually becoming more assertive in that dress before its dark side is fully revealed. She’s a hugely sympathetic character which makes the film’s overall neutrality look even harsher. Hayley Squires, as Reg’s fiancee Babs, nails that 80s self-assurance and wish to do better.

Sheila is seen as outdated and boring by her son and Gwen, and as part of the profit machine by her bosses. And then she has to literally suffer for fashion when all she wanted to do was what the ’80s told us to do: pull herself up, and, well, shop.

Watch the In Fabric trailer: