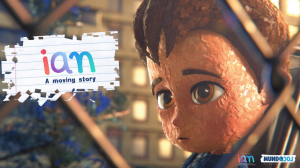 Ian is a beautifully animated short film about a lonely little boy with cerebral palsy.

He’s desperate to enjoy the local playground, but his physical difficulties are made worse by other barriers: the other children don’t understand why he seems different, and keep away from him; some of them laugh at him or are simply too busy to stop and play.

He literally breaks down into tiny pieces as an incident overwhelms him, before reappearing outside the playground.

But Ian is one tenacious (and brave) kid, and despite these setbacks heads back in again and again – eventually the children understand what he needs and resolve to help him.

When they too are pulled back through the fence, breaking into pieces, it shows them that despite their differences they are made the same way as Ian – we are all the same under the skin.

The film, directed by Abel Goldfarb, has been created to promote inclusion: reducing bullying, and helping children understand disability. There’s no dialogue at all, so it’s easily understandable to children (and adults!) whatever their language.

Ian highlights both the physical issues the boy faces and the feelings his situation raises in him. It’s probably best suited to young children, who will be attracted by the stunning colours and the physical manifestations of his feelings of exclusion (though I doubt they’d call it that!).

Having said that, don’t expect to be immune to Ian if you’re an adult – this may be a simple story but it packs a big emotional punch; I may have shed a tear myself, and I’m a million years old and tough as old boots.

The textured animation is impressive – Ian‘s stop-motion sets were made out of recycled waste and combined with the latest CG technology.

Emmy nominee Gastón Gorali wrote the film, after Sheila Graschinsky, mother of the real Ian, created a foundation to promote inclusion of children with disabilities.

The short has already won the Best Animation prize at the LA Shorts International Festival which means it is now Oscar-qualifying.